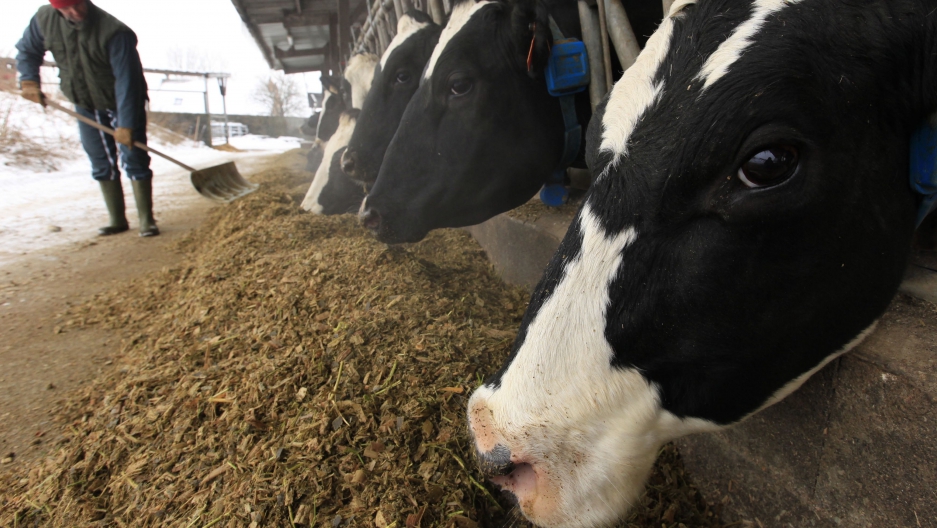 Through "genetic editing," Holstein cows, whose horns are usually removed on farms, will be born hornless.

If you’ve visited a dairy farm, you may have noticed that the cows — usually Holsteins — are hornless. They weren’t born that way: Both female and male Holsteins naturally grow horns. But on farms, the horns of dairy calves are often removed (an unpleasant process for the animals), so that the cattle won’t pose a threat to one another, or the farmworkers handling them.

Now, a team of researchers at the University of California-Davis has come up with another way to remove the horns. By swapping in a gene from the naturally hornless (polled) Angus breed, the researchers created hornless Holsteins that are born that way. Is the polled Holstein a new type of cow — a genetically modified organism? Or are researchers just speeding up the breeding process?

“To me, this is precision breeding as much as anything,” says Alison Van Eenennaam, an animal geneticist at UC Davis who led the research. “We're able to introduce a desired genetic variant [into Holsteins] very precisely, without affecting any of the other genetics that makes them great milk-producing animals.”

To genetically "remove" cow horns, the UC Davis team collaborated with a company called Recombinetics, to target the horn-growing gene using site-directed nucleases called TALENs as “molecular scissors.” This means that scientists sliced out the horn-growing allele naturally found in Holsteins and replaced it with the allele that stops horns from growing in the Angus breed. The result, produced through cloning? Two Holstein bulls, born without horns.

“So, it's basically a DNA sequence from a cow at the same location, at the same gene, except in this case we've now got the Angus allele, and so the Holsteins no longer grow horns,” Van Eenennaam says.

When Van Eenennaam’s team sequenced both of the bulls’ genomes to check their results — 3 billion base pairs each — they found no surprises.

“We didn't see any unanticipated off-target effects or anything other than the fact that we had replaced the allele at that one particular location,” Van Eenennaam says.

She adds that in the two bulls, the allele that stops horns from growing is a dominant trait, and both bulls are homozygous, which means they’re carrying two copies of the allele. When the bulls are bred with horned females, Van Eenennaam expects that the offspring will not grow horns.

“But we'll breed our cows in the fall when it's breeding time at UC Davis, and we'll tell you in nine months’ time,” she says.

Van Eenennaam and her team see their gene editing as potentially speeding up the emergence of a trait that could naturally occur over generations of selective Angus-Holstein breeding.

“In terms of the safety of these animals, there is no foreign DNA in them,” she says. “So, it's a little bit different to traditional genetic engineering or the GMO debate, because really, it's just the naturally occurring DNA that's already present in bovine species.”

But gene-editing remains controversial elsewhere in the industry, especially as it’s linked to broader debates about the safety and quality of genetically modified foods. Jennifer Kuzma, who co-directs the Genetic Engineering and Society Center at North Carolina State University, wants the food products from early gene-edited animals like the hornless Holsteins to be tested before hitting grocery store coolers.

“It’s safety, but it’s also consumer confidence,” Kuzma says. “I just think because this is the first gene-edited animal that's going to be entering the food supply, that it would be wise to go through a mandatory pre-market approval process, and to actually test that milk to make sure it is substantially the same as milk from other Holstein cows that have their horns.”

Kuzma also wants to see the public more involved in conversations about genetic technology and our food.

“I would think that we should consult the public on emerging technologies,” she says. “And that's not to say that everybody votes on whether or not we want this product, but at least to hear the different concerns that people have about whether it's gene-edited cattle … bulls or cows, or whether it's transgenic fish or what have you.”

In Van Eenennaam's view, that conversation would also include the risks of not continuing to develop gene-editing technology — especially when it comes to animal health. She notes that at the University of Missouri, researchers recently edited the gene targeted by a virus — porcine reproductive and respiratory syndrome — that costs the US pork industry about $600 million annually.

“By tweaking the DNA and turning it off, they've removed the target where the virus actually binds,” she says. “And so those pigs are no longer susceptible to that virus. … And to the risk-benefit evaluation, I think in this case, and perhaps the horned one, as well, there's very obvious benefits to the animal in terms of not getting sick or not having horns.

“That's really, I think, something I want to have a discussion with the public around, is understanding that thwarting the technology has consequences, too. And to have a robust discussion around both benefits and risks, because I think that there are very clear benefits that could be associated with the use of this technology in agricultural breeding.”

But before gene-edited Holsteins hit dairy farms around the country, Van Eenennaam’s team faces another uncertainty: How will the cows be regulated?

“According to the current regulatory regime, the FDA is in charge of regulating genetically engineered animals based on the fact that the recombinant DNA construct is a new animal drug, and that affects the form or function of an animal,” she says.

“In this case, in the couple of examples I've given, there is no recombinant DNA present. And so it's unclear whether the regulations cover these animals, or are they just really precision-bred animals that don't have any new novel DNA, and that’s basically, you know, the foundation of all our animal breeding programs working on spontaneous variation. So it’s unclear.”