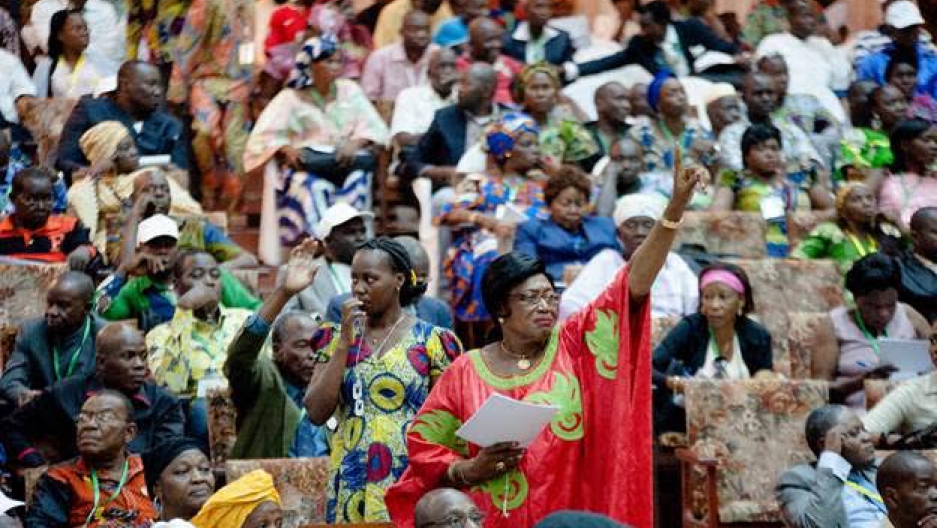 Women leaders attend the Bangui National Forum, held in the Central African Republic capital in May 2015.

Terrorists defying national borders, authoritarians clinging to power, increasing flows of desperate refugees: The next US president will inherit global challenges the standard foreign policy toolbox is ill-equipped to fix.

The winner in November could respond by doubling down on a transformative approach: a feminist foreign policy.

From Canada to Sweden and beyond, leaders are turning a gendered lens on their global strategies in the hopes of empowering women and advancing peace and prosperity.

Wealthy countries have quadrupled their foreign aid for gender equality to $10 billion in the past decade. Sixty-three countries around the world have created national strategies for integrating women into decision making on peace and security.

Should this be a priority for the new US administration?

It has long been known that social, cultural and political inequality drive conflict and instability; now, evidence is mounting that this applies to gender too.

American scholars have shown that the strongest predictor of a state’s security is not its religion, wealth or level of democracy; it’s the way society treats its women. When women influence peace negotiations, agreements last longer. And more women in police forces can help prevent terrorism.

For countries struggling to transition to democracy, new research shows that channeling support to female politicians and women’s groups can play a key role in helping these states get “unstuck.”

“There’s been a tendency to think of work to advance women’s political empowerment as confined to a particular part of society,” says Thomas Carothers, vice president of studies at the Carnegie Endowment of International Peace.

“But relatively modest investments in programs to promote women’s political empowerment can have a very big payoff in terms of avoiding conflict and damage to societies, which ends up hurting the United States as well.”

Swedish Foreign Minister Margot Wallstrom was the first world leader to speak openly about a “feminist” foreign policy. At an event in Washington, DC last year, Wallstrom suggested that “Striving toward gender equality is ... not only a goal in itself, but also a precondition for achieving our wider foreign, development and security policy objectives.”

In 2014, Sweden appropriated $1.5 billion in aid to fund gender equality in countries affected by conflict — five times more than it spent in 2000. Wallstrom’s strategy centers around three Rs: promoting the rights of women and girls, supporting women’s representation in decision making and ensuring financial resources for promoting gender equality.

Swedish foreign service members must also consider how gender dynamics, such as distinct priorities and power relations between and among women and men, affect all of its foreign operations.

Wallstrom argues her feminist policy is firmly anchored in human rights but draws on both feminine soft power and masculine hard power, depending on the context. Despite a strong domestic arms lobby and a lack of international support, she chose to end a military cooperation deal with Saudi Arabia, which is notorious for its violations of women’s rights and is using weapons from a variety of Western countries to kill thousands of civilians in Yemen.

It’s too soon to measure the results of Sweden’s shift, but other countries are developing their own versions of foreign policies that are more sensitive to gender — and there’s no agreed-upon playbook.

A self-declared feminist, Canada’s Prime Minister Justin Trudeau made history by appointing a gender-equal cabinet in 2015. International Development and La Francophonie Minister Marie-Claude Bibeau is now rethinking Canada’s foreign aid, and her ministry has made clear that a “feminist lens will be applied throughout all of Canada’s international assistance activities.”

Chief of the Defense Staff Gen. Jonathan Vance has ordered the Canadian Armed Forces to fully integrate gender into its planning, operations and training. “This new way of looking at operations will translate into enhanced operational excellence for the Canadian military,” he told Canada’s parliament in April, “and this is something we can all benefit from.”

Even before Trudeau came to power, 43 percent of Canada’s foreign aid to fragile states — those most likely to be affected by conflict, poverty and instability — targeted gender equality as its primary objective. This represents the largest share reported by any donor country.

Although less holistic in approach, many other countries have increased their emphasis on an area that has become known as “women, peace and security.”

The UK's William Hague made ending rape in war a core feature of his policy platform during his tenure as foreign secretary. Australia’s first female foreign minister, Julie Bishop, sought to make gender equality and women’s empowerment “central to global peace and security” during Australia’s term on the UN Security Council in 2013 and 2014.

Since 2008, Portugal, South Korea and Japan have reported the most significant increases in funding to gender equality in fragile states.

Women continue to be largely excluded from peace and security processes. The most recently available data suggests women are just 4 percent of signatories to peace agreements. Overall, only 6 percent of aid to fragile states prioritizes gender equality, and this figure drops to 2 percent for peace and security­–specific funding.

In the most catastrophic war of the past five years, Syrian women’s efforts to police the streets, negotiate with ISIS and deliver humanitarian aid continue to be largely overlooked.

Nonetheless, the new US administration could play a significant role in changing the status quo. It has a long history to draw from in this field, on both sides of the aisle.

In 1973, Congress passed the Percy Amendment — named after its Republican sponsor, Sen. Charles Percy — which continues to require that the State Department consider progress on women’s issues in decisions about bilateral and international aid.

In 1994, President Bill Clinton’s administration created the Office of International Women’s Issues within the State Department. President George W. Bush kept the program when he came to power.

The US National Action Plan on women, peace and security, launched by President Obama in 2011, represents the country’s most significant commitment to making women’s inclusion central to US foreign policy. In fiscal year 2017, the State Department requested more than $1 billion for gender equality programming worldwide in its annual budget, although only $134 million is dedicated to women’s empowerment and protection in conflict zones.

Hillary Clinton championed this issue as first lady and later as secretary of state, asserting that “the subjugation of women is a direct threat to the security of the United States.” American analysts have thoroughly documented her brand of feminist foreign policy, labeling it the Hillary Doctrine.

Given his predominantly male voter base, he could also choose to explore the role of positive masculinities in advancing security — even if he doesn’t mention the F-word.

Marie O'Reilly is director of research at Institute for Inclusive Security.