Shehzil Malik is a designer and illustrator living in Lahore.

Like many women in Pakistan (and elsewhere), each morning she plans what she’s going to wear based on what she thinks will attract the least amount of unwanted male attention — whistles, cat calls, stares.

The attention still comes, though. Malik got so fed up with her treatment that she drew an image symbolizing the struggle of Pakistani women who feel harassed in public spaces.

The black and white illustration shows a woman walking with her arms crossed over her chest.

Her head is down, her face slighly wincing.

Larger-than-life faces of men stare at her, make gestures and sounds, leer. 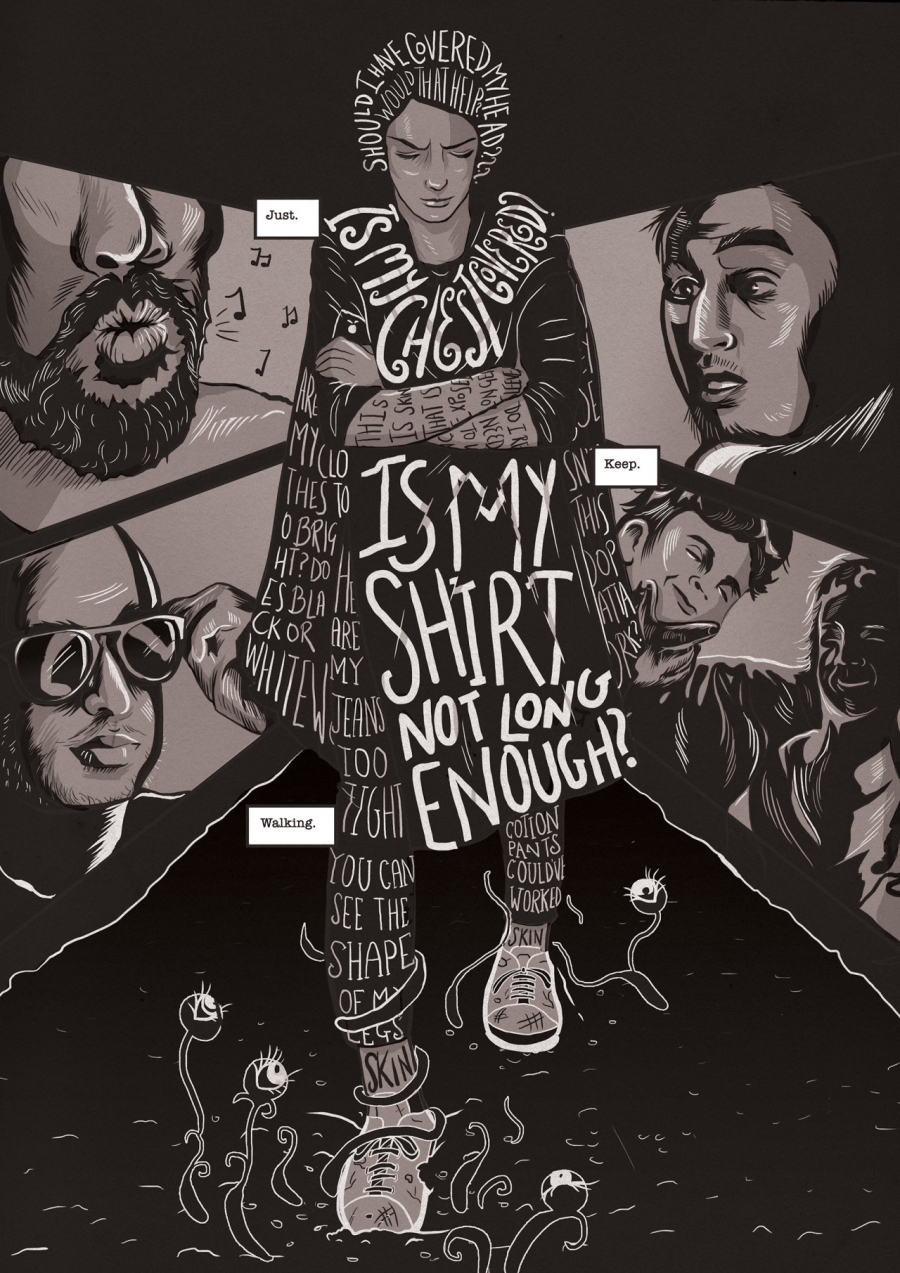 Written across her body are questions about her own appearance. “Is my shirt not long enough? Should I have covered my head?” Her bare ankles are labeled "skin." Even the weeds on the ground have eyes; they watch her intently.

Malik published the image on her Tumblr. She describes how it reflects her own experience.

“I would walk outside every day and go to my park and it was just getting very uncomfortable to be in that public space. And this image was basically exactly how I was feeling at the time. I would worry about what I was looking like, I was worrying about other people and I was like, I don’t know if others are realizing the impact they are having on my internal situation, just going for a walk,” she explains.

In Pakistan women dress modestly — usually with arms and legs covered and often with a headscarf as well.

But even women wearing all of those layers of clothing still get harassed.

“In Pakistan public spaces are interesting because they are incredibly gendered. My foreign friends came and they were like ‘Shehzil, there are no women in the street, where are they?’ And I was like, no there actually are a lot of women in the street. For instance, we have Liberty Market, which is very woman-heavy.”

One of Shehzil Malik's illustrations.

“It’s got all the cloth merchants and jewelry and most of the foot-fall is women and we feel very comfortable going there. Yes, the men there may stare at you, but the shopkeepers definitely have a different energy because now you are the one buying. So they react very differently to you as opposed this other road — Brandreth Road,” she says. 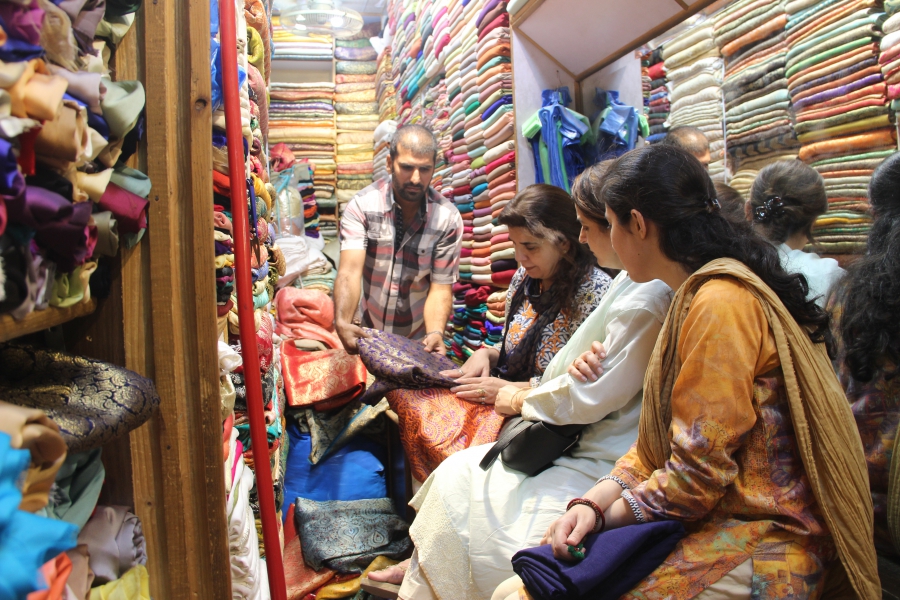 Many women shop in Liberty Market in Lahore, Pakistan.

“I went to buy some hardware with my father. And as I was asking questions, the guy would not answer me. And later my dad was just laughing, saying isn’t it funny how you didn’t get an answer out of that guy," Malik recalls. "I was like, no — it’s not funny. What was happening is that he basically reduced me to my gender and thought it was respectful to not talk to me. So there are two kinds of reactions you get in market places. Either they are leering at you and make you uncomfortable, or they don’t look at you at all.”

“I think men here, what they do is — probably in the States they’d be like, 'Hey baby, how is it going?' — over here they start singing under their breath Bollywood songs. Or they start whistling inappropriately and you just wonder, did I incite this?” Malik adds.

Malik created a series of images she called #WomenInPublicSpaces.

“I often get this — I wear jeans a lot and I also pray so it would be like, ‘you don’t look like somebody who prays.' And that’s ridiculous to me. Is denim un-Islamic? How is that a thing?" she says.

"I live with my parents and they dictate how many layers of clothing I should be wearing and I had this conversation with my mom where I was like at what age — and I’m really old now, three decades have gone by on this Earth — and I was like at what [point] would you be OK with me walking out dressed like I want to dress, and she thought about it. And I was like, I want a number, what age — and she thought about it and said never.”

And that is at the core of Malik's illustrations.

“Seeing a woman outside should be normal, whether you are in jeans or a kurta or whatever should be fine. It shouldn’t matter. But the fact that it does means this conversation needs to happen," she says. 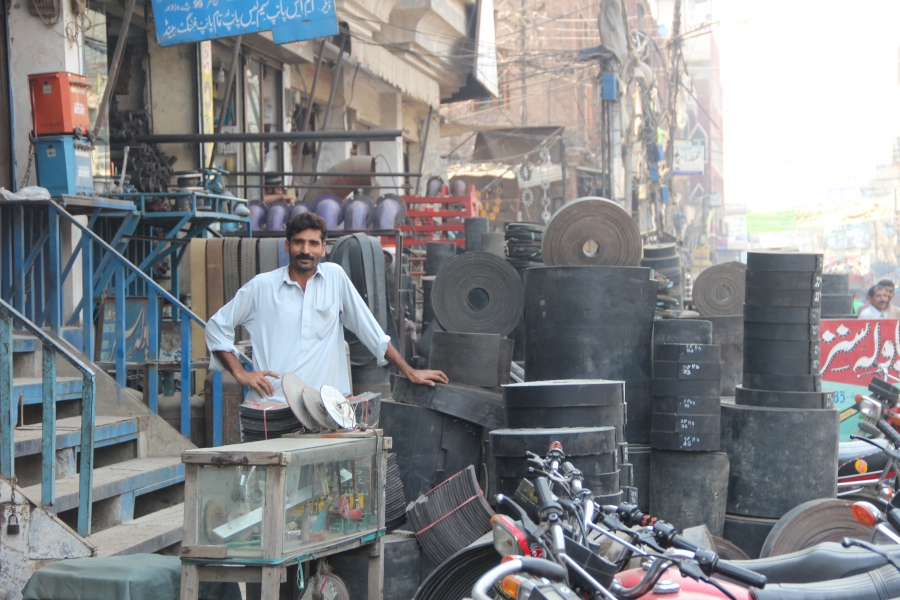 Women are often treated disrespectfully while shopping on Brandreth Road in Lahore.