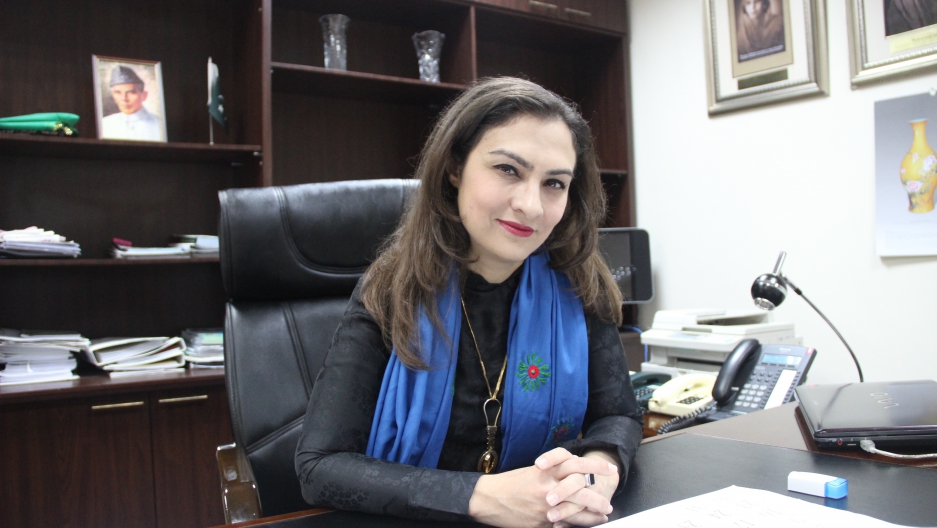 At a dimly lit welfare office in Rawalpindi, Pakistan, women like Akhtar Shaheen line up to file benefits requests and get their thumbprints scanned for a new biometric identification system.

Shaheen, 40, has five children and needs money for asthma medicine and school fees. She says she wouldn’t be able to send two of her teenaged children to college without it.

The women at this center are among the 5.3 million in Pakistan who get $180 a year in small cash payments through the country’s biggest social safety net, the Benazir Bhutto Income Support Program.

The program pays women only, and that’s by design.

If YOU had a billion dollars to help women in your country, what would you do?

Tweet us your answer @womenslives using the hashtag #BalanceofPower.

“They are treated as heads of households, the money is going to them,” says program chairwoman Marvi Memon.

Memon says the welfare program she runs is not just about money. It’s about raising the status of women.

“When you’re treating women as primary members of the household, then their importance in the family increases immediately, and their status improves,” Memon says.

Memon, an intensely focused woman who carefully measures her words, knows what it is for your status to improve.

She’s the daughter of a politician, and a minister of state and member of parliament in her own right.

But she wasn’t elected. She was selected by her party in 2008 for a seat reserved for women. Memon is among a wave of women lawmakers to take office since 2002, when Pakistan adopted a quota of 17 percent women in parliament.

Memon, who’s 44, says she has been fighting for the rights of women ever since.

Her best-known legislation is a 2011 law that established stiff penalties for perpetrators of acid attacks.

“During my activism, I saw some victims in hospitals, and I promised them on their dying deathbed that I would get them legislation so that they would get justice,” Memon said.

Memon was able to win support from women across parties to push the bill into law.

Women make up just one in five parliamentarians around the world, and quotas like Pakistan’s are a way to get women like Memon in the door.

But research shows that they are not the whole solution.

“What we see is that quotas are usually not enough in order to really have the female parliamentarians have an impact,” says Alexandra Rosen, senior director of the Brussels-based advocacy group Women in Parliaments Global Forum. 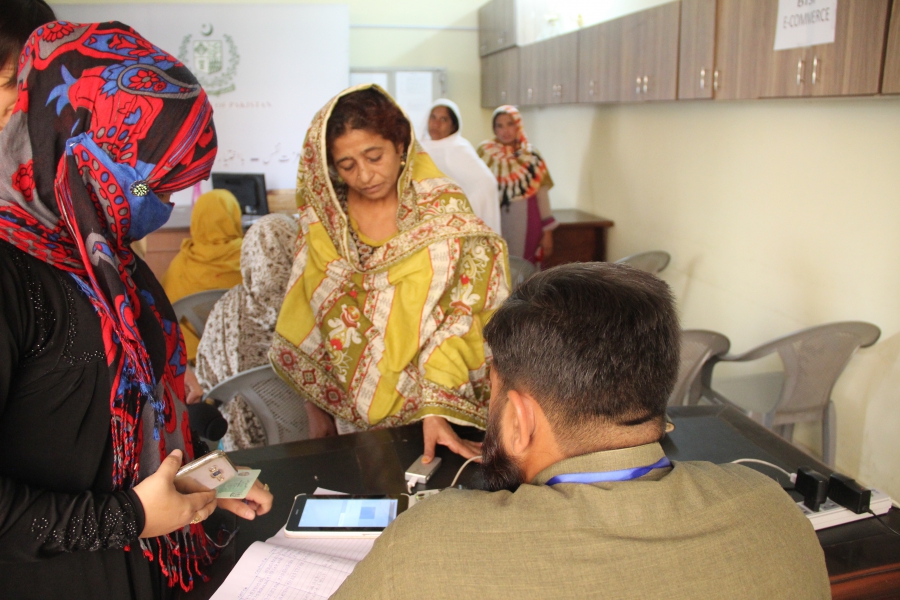 Akhtar Shaheen, center, provides her thumbprint at a welfare office in Rawalpindi, Pakistan, as Fouzia Rehman looks on. Pakistan’s largest social safety net program, the Benazir Income Support Program, is starting to use biometric data to dispense cash welfare funds to beneficiaries in an effort to reduce fraud.

“There are a few strategies that have proven successful in terms of female MPs maximizing their power in parliaments, and the first one is networks.”

Her foundation is building a network of the world’s roughly 9,000 female parliamentarians “to create this kind of 'new girls' network' to rival those traditional routes to power,” she says.

For @marvi_memon the billion dollar question isn't so hypothetical. She has a billion dollars to spend on gender equality. #BalanceofPower pic.twitter.com/KgqMw2wcn3

Outside investment aims to raise women’s voices in Pakistani parliament

In Pakistan, a "new girls' network" has been given a lot of credit for empowering female legislators.

The UN helped start a Women’s Parliamentary Caucus in Pakistan in 2008, and within a few years, parliament passed Memon’s acid attack legislation, as well as legislation on domestic violence, workplace harassment and legal assistance for women prisoners.

The US has also backed efforts to bring more women into government worldwide, as part of the more than $1 billion spent annually by the State Department on developing and improving women’s rights around the world.

In Pakistan, the US government is running exchange programs that bring female representatives to the US, where they can see legislative practices at the federal, state and local levels.

And the US development agency, USAID, is helping women get the identity cards needed to vote, so the percentage of women in parliament — and their collective power — can expand beyond seats currently reserved for women.

Pakistan is one of the top recipients of US State Department dollars, largely because of the strategic importance the country plays in US anti-terrorism efforts. It is an example of how the US says investing in improving women’s lives can also support US foreign policy objectives like economic growth, security and stability.

Still, even with all this support, it’s especially hard for women lawmakers in reserved seats to buck the party in Pakistan, because they are appointed by party leadership.

“This platform is one platform where all party women get together,” says caucus secretary Shaista Pervaiz. “We try to build consensus. And it’s across party, nobody belongs to any party when it comes on the caucus floor.”

But this is politics, where no one ever agrees. And the subject of how best to raise women’s voices is no different.

“I did not find the caucus effective at all,” Memon says.

When Memon was in the opposition party, instead of her current ministerial post, she says she got work done not by rallying her sisterhood, but by sitting at the same table as men.

Memon is a political fighter and doesn’t buy the idea that networking is key to elevating women.

She thinks getting hardworking women lawmakers into Parliament has been the most important step in pushing against the patriarchy. In that way, the quota system has worked.

“This crutch that I call a crutch has actually served,” Memon says. “Whilst it is a crutch, it is a useful crutch.”

A crutch that has landed her in a corner office, expanding a billion-dollar program to lift women out of poverty.

An earlier version of this story mis-stated Memon's age.