Washington's Yakima Valley produces a quarter of the world's hops, but warming temperutres in the region have growers and brewers concerned about the future of the vital crop.

We all know that you need water to make beer. After all, beer’s up to 95 percent water. But you also need water to grow the other stuff that’s in beer, like barley and hops. Hops are the flowers of a kind of hemp plant. They’re what gives beer its aroma and flavor.

On his 1,100 acres, long rows of vines grow on trellises up to 20 feet high. A quarter of all the world’s hops are grown around here, and they attract buyers from thousands of miles away.

“The geography of the Yakima Valley is really unusual,” explains Ian Parkes, of Purity Brewing, in the UK. Parkes says the far northern latitude bathes the region in long hours of summer sunlight, and melting snow from the Cascades provides water for most of the growing season. Together, he says, the two give the valley’s hops “that pungency of aroma that you don’t necessarily get from other hops.”

“Nobody could believe (what) was happening,” says climate scientist Guillaume Mauger of the University of Washington. “It’s just crazy.”

What was happening was a freakishly warm winter in 2015 — 4.5 degrees Fahrenheit above normal. That meant the Cascades got rain all winter long, and no snowpack formed. By May, the Yakima Valley was starved for water.

Eric Desmarais managed to salvage his crop. But Mauger says the warm winter was a harbinger of years to come.

“You can sort of look at 2015 as kind of like a dress rehearsal for the future,” he says. And it’s a future that may not be too far away. Mauger says warm winters like 2015’s will likely be the norm within about 50 years. 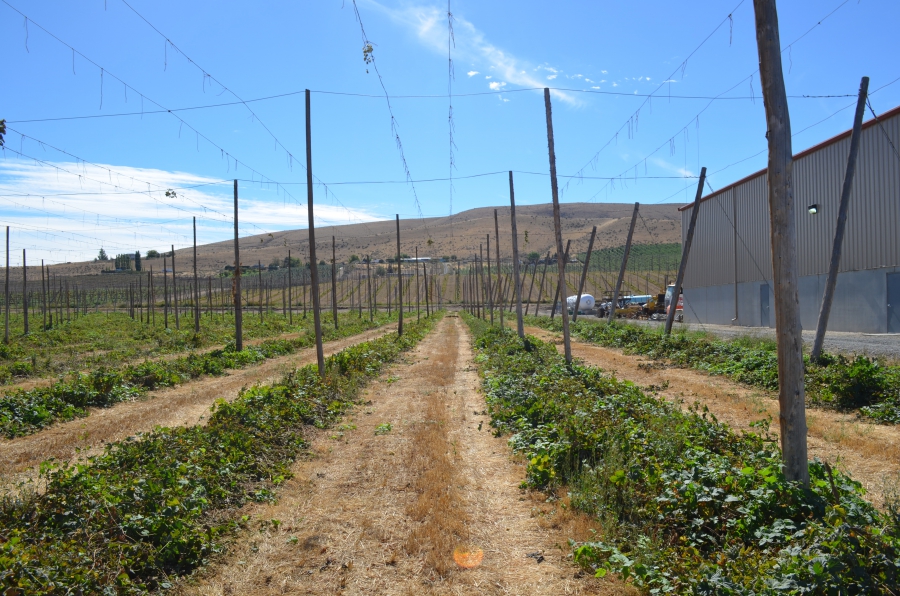 Farmers in Washington's dry Yakima Valley depend heavily on runoff of melting snow in the nearby Cascade Mountains. But climate change is putting that water supply at risk.

Walking through one of Desmarais’ hop yards, it’s easy to see how a healthy snowpack is so crucial here. Only the vines are green. The surrounding hills are all brown, and the ground is dry and cracked.

And this year was a good year for water.

“Last year’s drought scared a lot of people,” Desmarais says. “I think there’s a renewed focus on trying to all of us get to a solution.”

“All of us” means the different groups that have competed for water here for decades but are now trying to work together: hops growers, apple and cherry farmers, the native Yakama Nation, conservationists, and others.

But growers like Desmarais aren’t waiting to make changes.

Desmarais has spent hundreds of thousands of dollars on water conservation technology to get the most out of whatever nature will provide in a warmer future, including switching from furrow irrigation of his vines to the much more precise drip irrigation.

He’s also hoping to help cut the risk of climate change by using a lot less energy, starting with his drying kilns.

In a vast warehouse that smells just like beer, hops from Desmarais’ vines are piled 3 to 4 feet high. Drying those hops uses as much propane as it would take to heat 440 homes, Desmarais says, but that’s a lot less than he used to need. He says the drying kiln here is 20 to 30 percent more efficient than his old one was, and on another part of his farm, he’s got a newer kiln that’s even better.

“We brought German hop-drying technology to the United States,” he says, “and it’s actually 40 percent more efficient than even this one is.” 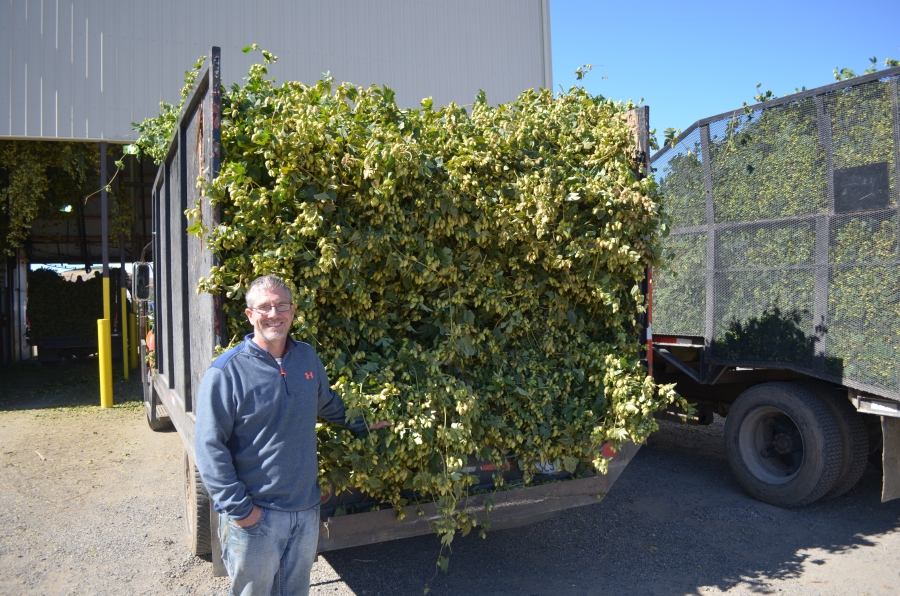 Fourth-generation hops farmer Eric Desmarais is fighting both the impacts of climate change — by switching to water-saving irrigation technology — and the cause — by installing drying kilns that use much less fossil fuel energy.

Desmarais is responding to his own local concerns about water supply in the Yakima Valley. But he’s also responding to the concerns of his customers.

“Every craft brewer now that we work with direct, sends us a sustainability checklist,” he says. “We don’t have to be 100 percent on every one, but they want to see progress.”

One of those brewers is Purity, Ian Parkes’ outfit in Stratford-upon-Avon, England. But Parkes says it’s not just the quality of the hops that draws him to growers like Desmarais. It’s also that Purity shares his outlook on the future of the brewing business, an outlook that includes doing everything possible to make it more climate-friendly.

“Brewing was a highly inefficient industry that used an incredible amount of water, technology that wasn’t particularly up-to-date, and there was a lot of waste,” Parkes explains. “What we set out to prove is that you can do things differently if there’s a willingness to try.”

Purity recycles all its wastewater on-site. It recaptures some of its energy by reusing steam from its chimneys. It feeds its spent grain to cattle, and it uses the spent hops from Eric Desmarais’ farm back in Washington as fertilizer.

Climate change can often seem like a very abstract problem. But Parkes says the threat to his hops supplier in the US makes it very real. “It really galvanizes our efforts to try and be more sustainable here.”

Facing a threat to its supply of hops, England's Purity Brewing Company is trying to lead the way in cutting the carbon footprint of the beer industry.

Millions of beer drinkers, especially those who like hoppy IPAs, might hope those and other such efforts succeed.

But, for his part, University of Washington climate scientist Mauger has one other suggestion for taking the pressure off hops growers.

With a changing climate, the French see trouble ahead for champagne