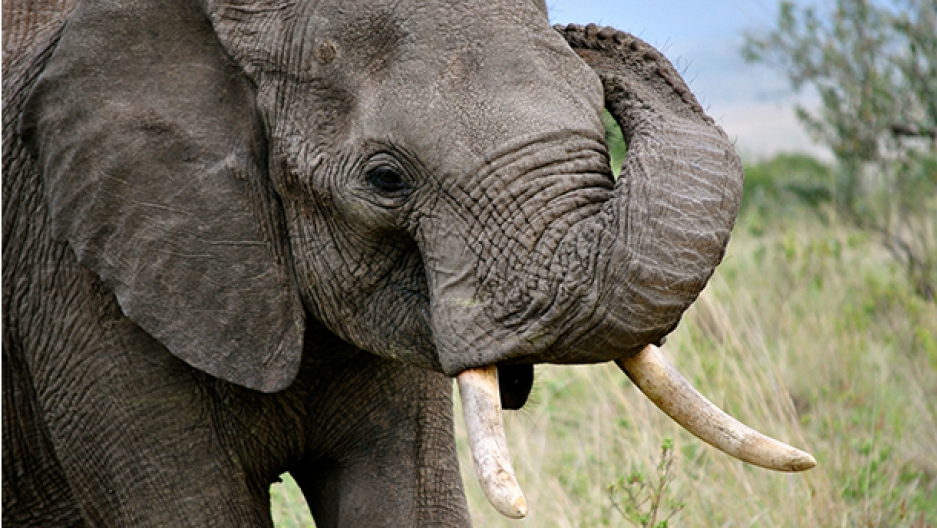 Poaching African elephants for their ivory contributed to a 30 percent population decline over a period of seven years, between 2007 and 2014.

Experts estimate traffickers in illegal wildlife take in about $19 billion dollars each year. Many species face extinction unless the illegal activity is stamped out. That’s the aim of CITES, the Convention on International Trade in Endangered Species.

Close to 500 different species of flora and fauna were on the agenda, reports Living on Earth’s Bobby Bascomb, including some as unique as the psychedelic rock gecko, tomato frog and false tomato frog and certain types of sharks and rays. Several others, such as the African gray parrot and the Chinese crocodile lizard, were moved from the CITES Appendix II to the convention's more restrictive Appendix I, meaning that international trade in those species is now completely prohibited. (The convention has three appendices, or "lists of species afforded different levels or types of protection from over-exploitation," according to the group.)

CITES negotiators also agreed to prohibit trade in the pangolin, the world’s most heavily trafficked mammal. “In Asia, pangolin meat is considered a delicacy, and Asian consumers believe its scales have special medicinal qualities, which is a widely debunked claim,” Bascomb says.

The CITES decision on pangolins was nearly unanimous, but discussions about other species, like elephants, rhinos and lions, were far more contentious. These animals all have a similar story, Bascomb says. That is, they’re caught in a conflict between the “haves” and the “have-nots.”

For example, South Africa, Namibia, Botswana and Zimbabwe have large, healthy elephant populations. So, while a ban on the international ivory trade remains in force, Zimbabwe and Namibia introduced a proposal at the conference that would make it easier for them to sell their ivory.

“The issue here is about managing these populations of ours in a manner that will actually bring sustainability to vegetation, while also getting the needed funding to pay for the conservation functions,” says Edna Molewa, South Africa’s Minister of the Environment, who supports the proposal.

Basically, Bascomb explains, Molewa is saying that CITES needs to consider carrying capacity: How many elephants can any given piece of land sustainably support?

But, the have-not countries have a different view. In some places, like Cameroon, poaching is such a problem that elephants may go locally extinct there in the near future, and a new elephant census released at CITES shows a 30 percent decline in elephant populations across all of Africa, from 2007 to 2014. So, a coalition of 13 countries with dwindling elephant populations submitted a counterproposal that would put all savanna elephants under the "toughest controls," Bascomb says. Both proposals failed to get a two-thirds majority, so neither passed.

The clash between the haves and the have-nots extends to other species, as well. African lions, for example, can be found in less than 10 percent of their "historic range," so countries with struggling populations, such as Chad, Ivory Coast and Mali, have proposed to put all lions on the most restrictive list. Other countries with healthy populations, like Zimbabwe and South Africa, oppose that. South Africa exports lion bones to China for traditional medicine, and lion hunting is also a big business in Zimbabwe.

Lion hunts typically involve captive, bred lions in what’s called a “canned hunt,” Bascomb says. “Hunters pay upwards of $35,000 to kill a lion, money which is supposed to go back into conservation and support local communities. But some CITES countries oppose these canned hunts and want them banned, or at least a ban on the export of lion heads, the trophies from hunting.”

Eventually, negotiators reached a compromise: CITES voted to prohibit the export of wild lion parts, but allow export of bones and trophies from captive, bred lions.

The situation with rhinos is perhaps the direst: Only about 25,000 African rhinos are left in the world, and last year, alone, more than 1,300 were killed. Rhino horns are sold in Asia for their supposed medicinal properties. South Africa is home to roughly 80 percent of the world’s rhinos, and there has been an ongoing internal debate about whether or not to legalize the domestic sale of rhino horn, Bascomb says.

“Some 6,000 rhinos are owned by private citizens — more than in the rest of Africa combined,” Bascomb explains. “They keep their rhinos on private farms and humanely remove the horn every few years. Horns are made of the same material as fingernails or hair and can grow back in the same way. Rhino ranchers say it’s a renewable resource, and they’re sitting on a stockpile of horns worth millions. They want to sell that stockpile, but a ban has been in place for nearly 40 years.”

Pelham Jones, chairman of the Private Rhino Owners Association, says prohibition doesn’t work, and it’s expensive to keep rhinos. “The cost for us to protect those animals from 2009 to 2016 was about $115 million,” Jones says. “We desperately need funding to help conserve the species. We get zero government incentives or assistance in our conservation endeavors.”

A proposal to legally sell about $10 million worth of rhino horns was rejected by a 100 to 26 vote at the CITES conference.