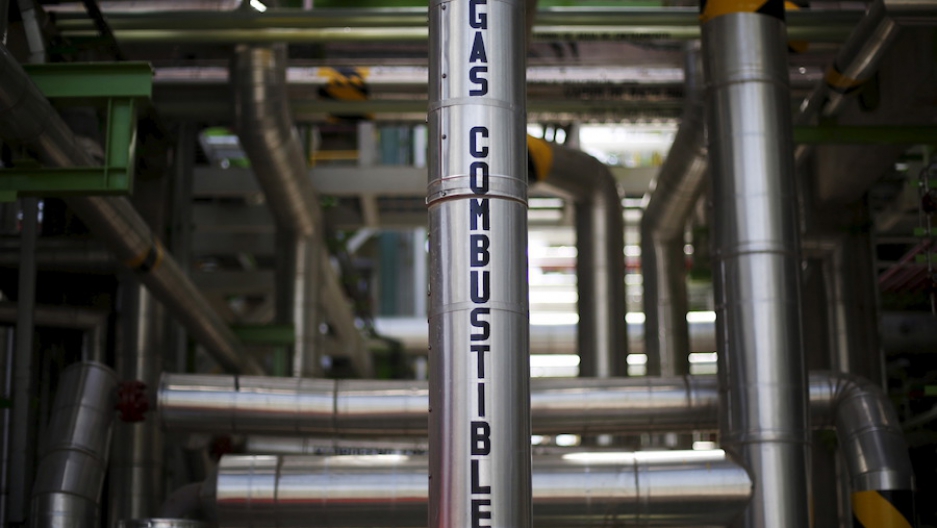 Fuel gas pipes at Mexico's national oil company Pemex's refinery in Salamanca, in the state of Guanajuato, are pictured here.

Mexico is opening up to private gasoline retailers, and a new wave of fuel imported from the United States is expected to follow.

But here’s a not-so-little problem: Gangs steal a huge amount of gas, and loose law enforcement and corruption let it happen.

For the past decade or so, there’ve been widespread reports of drug cartels putting illegal taps in the fuel pipeline network. The state-run oil company Pemex has documented that some of its workers and contractors have participated, after receiving bribes or even death threats.

The government has tried to step up security, including a yearly budget increase for a military task force in charge of eradicating fuel theft, but they're still no match for the level of theft. The number of illegal taps nationwide has soared — by over 3,500 percent since 2000, according to data provided to us through multiple reports by Pemex and other agencies.

Mexico ranks as one of the hardest-hit countries by fuel theft in the world. An average of 20,000 barrels of fuel is stolen there per day — about three times the daily gas consumption of Washington, DC. That's a loss for the country of as much as $4 million daily.

In an effort to reduce siphoning, Pemex stopped moving ready-to-use fuels through its pipelines. Instead, it now carries raw products from refineries to storage terminals. Once there, they are processed and then distributed throughout the country in tanker trucks for commercial purposes.

That change simply shifted the target. Now, thieves come directly to Pemex's storage facilities, fill up fuel by the truckload and drive off. More than half of the fuel stolen in Mexico is being taken that way, according to the company.

Getting away with it

Weak law enforcement has also allowed theft to thrive. Pemex says, for the past 15 years, only about 8,800 suspects have been detained in connection with theft — but not necessarily charged. It's a fraction of the number of perpetrators likely to have been involved.

Duncan Wood, director of the Mexico Institute at the Wilson Center, says fuel theft happens because there are no consequences. “The judicial system doesn’t work particularly well. Very few crimes are actually prosecuted.” And local police forces, Wood adds, are often “complicit in one way or another.”

While lawmakers recently approved a new law stipulating 15 to 25 years in prison for fuel theft, less than one-tenth of related crimes are actually prosecuted.

Robert Campbell, head oil researcher at the consultancy Energy Aspects in New York, says there’s no reason why Mexico can’t keep better track of its gas like other countries.

“Fuels that reach the storage terminals are not measured once they leave the facilities. Volumes are not being accounted for,” he says.

The National Citizens' Observatory, a think tank in Mexico, estimates the national black market for fuel is worth $2 billion to $4 billion a year.

And it's not just a Mexican problem. Smuggled fuel from Mexico has reportedly reached into Central America. And US and Mexican officials have investigated cases of alleged trafficking of oil products by Mexico's powerful narcos to companies in the United States.

A Pemex gas station in Mexico City is shown here.

Although the first-ever fuel import permits for private retailers were recently granted, the risk of theft and violence seems to be an implicit condition for doing business. New gas stations will not necessarily have to get their fuel from Pemex, but rather the best bidder in the market. As a result, stolen gasoline and diesel could end up in new companies’ stations unknowingly.

Ana Lilia Perez, an award-winning journalist, believes that stolen fuel is everywhere. “Legitimate gas stations buy stolen fuel — some know it’s contraband and others don’t,” she says. “A full tanker truck sometimes goes for half of its real price. Who would refuse such a bargain?”

Campbell, the oil researcher in New York, considers all efforts to curb fuel theft to have been ineffective. “If Pemex or if there was anybody interested in stopping it,” he says, “it would have stopped already.”

But despite the government's security buildup, some point to money problems at Pemex as a major factor in the continued thievery. Fluvio Ruiz, ex-general counsel at Pemex, says the oil company’s refining arm has been starved of cash. “If there is no money for maintenance, much less there will for security,” he says.

Meanwhile, Mexico is aiming to play a strategic role in consolidating North American energy. It has plans to cooperate more with the US and Canada, as well as with its Central American neighbors. But Mexico is struggling to reach international standards to attract hoped-for investments to position itself as a reliable regional partner.

The most recent fuel theft figures, disclosed by Pemex in September, show no signs of change — further evidence that federal and company efforts are failing.