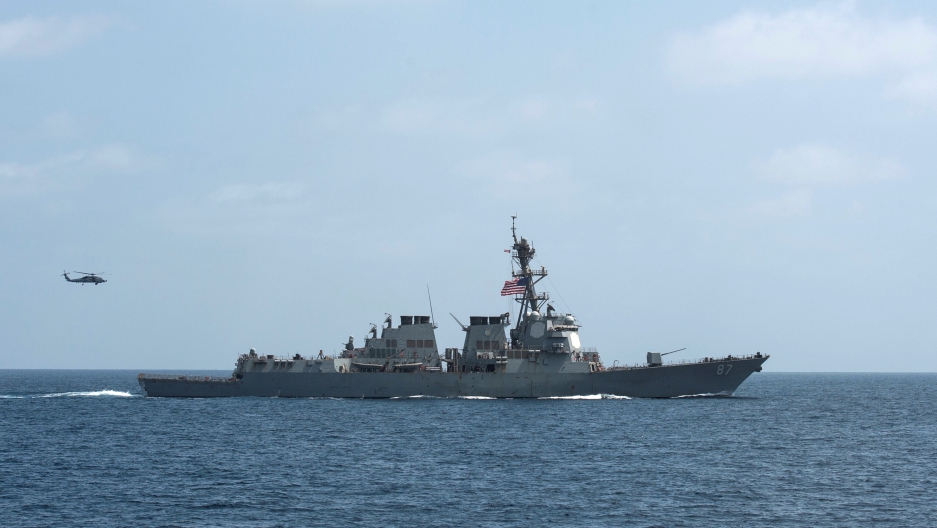 Pictured here is the US Navy guided-missile destroyer, USS Mason.

The US fired cruise missiles to defend its ships in the Red Sea. And got drawn deeper into the civil war in Yemen.

A US Navy warship, the USS Mason, was fired at — twice — in international waters off the coast of Yemen. The missiles didn't hit the ship, and no one was hurt. Then Thursday, the Navy responded, firing cruise missiles at radar installations on Yemen's western coast, where the original fire came from.

That happens to be an area held by the Houthi rebels, whose takeover of much of Yemen set off the civil war in late 2014.

This is the first time the US itself has fired on the Houthis, deepening American involvement in the war. Since March last year, the US has supported the Saudi campaign to defeat the Houthis by arming, guiding and assisting the Saudi-led air campaign and naval blockade against them. But until now the US had not fired a single shot.

"Many people are still holding out hope that this conflict can be brought to an end through negotiation," says The World's Richard Hall. "And when something like this happens, it kind of pushes that possibility further into the distance."

The failed attacks on the USS Mason came within days of a Saudi airstrike on a funeral home in downtown Sanaa, Yemen's capital, which killed at least 140 people and injured at least 500 more. The funeral, attended by high-ranking members of the Houthi government and military, was the deadliest airstrike in the history of the war. And while the Saudis have not claimed responsibility for the attack, they're the only ones flying planes over Yemen. 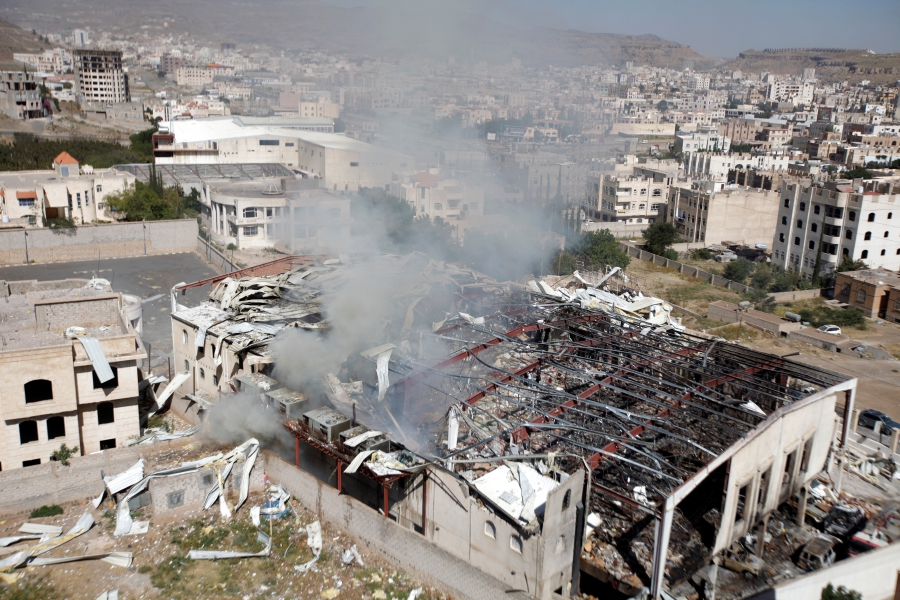 This is a view of the community hall where Saudi-led warplanes struck a funeral in Sanaa, the capital of Yemen.

In this context, the attack on the USS Mason is seen by many as retaliation — against the United States for supporting Saudi Arabia. "They refuel planes, they provide intelligence for the bombing," Hall notes. "They've also sold $22.2 billion worth of weapons to Saudi Arabia just since the war began.

"The attack on the funeral may have been a catalyst," says Hall, "but this is a message to the US, 'We see you as an active partner in this conflict.'"

"Of course the escalation in the Red Sea looks as though it plays in sequence with the escalation [of the Yemeni civil war] on land," says Katherine Zimmerman, research fellow at the American Enterprise Institute in Washington, DC. "But when you zoom out a little, it plays into the increasing Iranian-Saudi tensions."

In case you're wondering, why Iran? It's that the US and Saudi Arabia accuse Iran of supporting the Houthis, who are a Shiite Muslim group. Iran denies this.

Iranian media have been peppered with criticism of the Saudi war in Yemen and the young defense minister who is leading it, the 30-year-old Deputy Crown Prince Mohammed Bin Salman, son of the Saudi king.

"We [recently] saw an Iranian official make a very thinly veiled statement about Mohammed bin Salman's rule and how young, inexperienced Saudi leadership has taken an offensive strategy against Iran, which, if you think about what Bin Salman has done, it's been the Yemen war," says Zimmerman.

"And we look at what Iran itself is doing and the increasingly aggressive behavior that we're seeing from the Iranian navy [in the Persian Gulf], sanctioned by top-level Iranian officials."

The United States is looking closely at its relationship with the Saudis and weighing the consequences of its support. Following the attack on the funeral, National Security Council spokesman Ned Price told Reuters, "US security cooperation with Saudi Arabia is not a blank check. ... We have repeatedly expressed our deep concern about airstrikes that allegedly killed and injured civilians and also the heavy humanitarian toll paid by the Yemeni people."

But, Zimmerman says, we should not expect the US to pull out of its military relationship with the Saudis. "The assumption is that if we stop that support, then Saudi Arabia will stop the war, and I think that's false," she says.

"Even though the United States is under increasing pressure for its support of Saudi Arabia," Zimmerman concludes, "to simply withdraw may actually make the situation a lot worse. We lose our leverage, and really do unleash the Saudis inside of Yemen in a way that could be much more detrimental than we're seeing today."