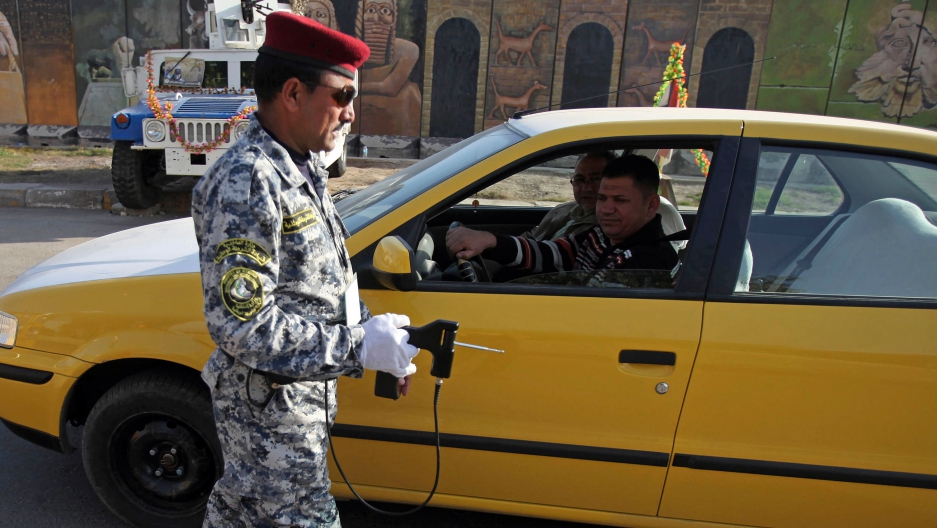 An Iraqi police officer uses the device to inspect a car at checkpoint in central Baghdad, Iraq, 2010.

Cars enter the parking garage at an upscale shopping center in central Beirut. The city has been hit with a number of bombings in recent years and security guards go over the vehicles here with hand-held bomb detectors.

“You do it like this,” says Sami, a guard who doesn’t want to give his last name. He points a long antenna at the wheel well of a black SUV.

The device Sami is using is called the Alpha 6, but what Sami doesn’t know is that it’s completely useless — not poorly designed, but completely incapable of detecting anything. Thousands of these devices were sold to governments and security firms across the Middle East and Asia.

Essentially, it’s just a black plastic handle and a metal antenna, modeled after a novelty golf ball finder called the Gopher that was marketed in the 1990s. According to the BBC, Samuel and Joan Tree, the British couple that made the Alpha 6, were found guilty of fraud in a UK court in 2014. The devices cost just a few dollars to produce but were sold abroad for thousands of dollars a piece.

Another British businessman, James McCormick, also marketed thousands of similar devices, many of which were sold to Iraq between 2007 and 2010, years when thousands of people were killed in bombings of government buildings and shopping areas. McCormick is serving a 10-year prison sentence in the UK, but the fake devices he sold are still being used across the region.

Inside the shopping center in Beirut, Zayid Nasrallah says he’s known for years that the detectors don’t work.

“When I read the [BBC] article four or five years ago, I expected all this to stop,” he says. “But it hasn’t.”

Nasrallah says the companies and government agencies that bought them should have been more careful, but he speculates that some people may have secretly profited from the deals.

“Obviously they are in bed with them to a certain extent,” he says. “Unless the security companies actually believe these devices work."

It turns out that some of them do.

“We use the Alpha 6,” says Maher Al-Obedi, the security manager for this shopping center. “I know there is a lot of talk about it, but the army are still using it, the police are still using it. So we are using [it].”

Obedi says he believes the device works, though he admits it’s not perfect. If the guards are suspicious, he says, they bring in the bomb-sniffing dogs. But then he adds that with how attacks are carried out these days, nothing can be truly effective.

“If someone is coming to kill himself, to explode himself. How can you stop him?”

Before I leave, I tell Sami the security guard that the device he’s using is fake, and that the man who made it is in jail.

He shows me the handle on it. It's stamped "made in the UK" and has a serial number.