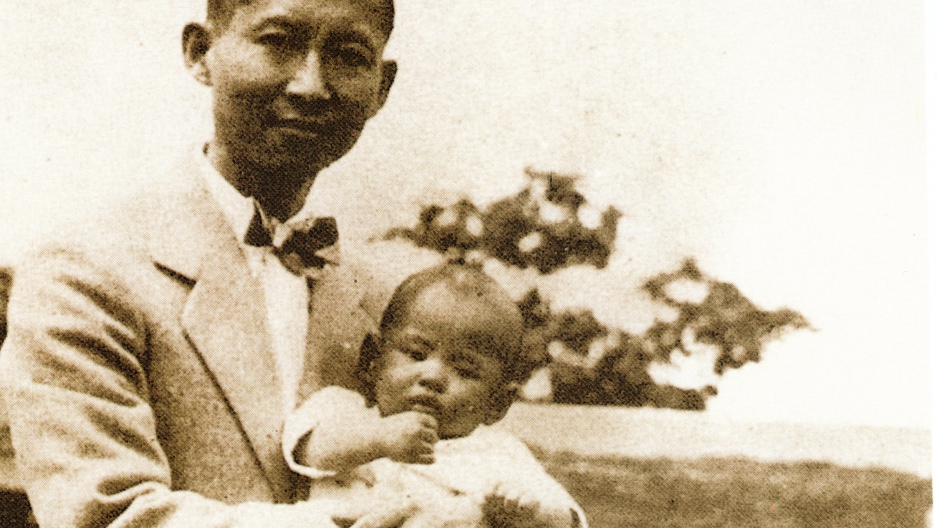 Prince Mahidol of Thailand holding his son, the future King Bhumibol Adulyadej, in Brookline, Mass. in 1927.

I must have seen the plaque on the apartment building at 63 Longwood Avenue hundreds of times before I bothered to read it. Who knew? A king was born here.

There will be plenty of discussion this week about King Bhumibol Adulyadej, who died Thursday as the longest reigning monarch in modern history. But I'm thinking about that plaque. And the Thai American woman who put it there.

Cholthanee Koerojna, who calls herself Chol, came to Massachusetts to study in 1980. Almost immediately, she learned of a local connection to Thai history: Her country's king was born in Cambridge, just across the river from Boston. "Why was he born here?" she remembers asking herself. "That interested me. So I started researching, and then found so many interesting stories about his family."

Chol is now president of the King of Thailand Birthplace Foundation. She and her researchers have located 11 locations around Massachusetts that have a special place in Thai history.

One is in Brookline, next to Boston, where a plaque notes: “Prince Mahidol of Siam (Thailand) lived in one of the apartments here from 1926 to 1928 with his wife and their young children: Princess Galyani Vadhana, Prince Anandha [who was to become King Rama VIII], and Prince Bhumibol Adulyadej [who was to become King Rama IX]. Prince Bhumibol was born at Mount Auburn Hospital in Cambridge on 5 December 1927, the first monarch to be born in the continental United States." 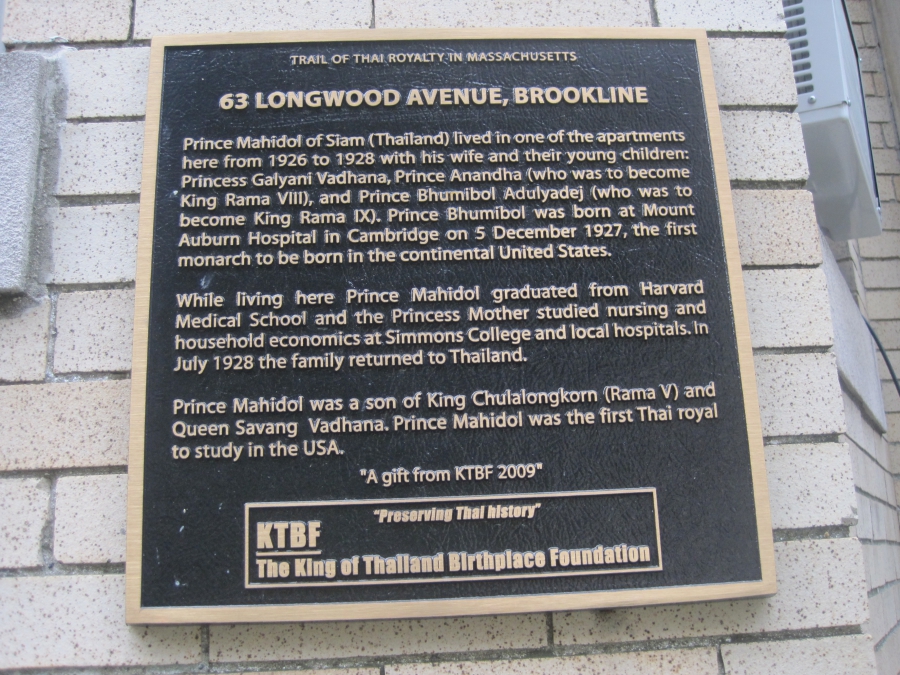 The plaque tells the story of the late king's father, who came to Massachusetts to study at Harvard 100 years ago. His Royal Highness Prince Mahidol arrived in Massachusetts in 1916, the first Thai royal to study in the US. His mission was nothing short of bringing modern medicine back home to Thailand. When he and his wife, Mom Sangwan, returned in 1928, he had a medical degree from Harvard and she was a trained nurse. They also had three children, one of whom would became the longest reigning monarch in modern history.

Chol raised the money to have this plaque cast in 2009, arranged with the building's owner to have it mounted, and organized a ceremony for its unveiling. A dozen local school girls sang the US national anthem, and a Thai singer performed the national anthem of Thailand. It was raining, but Chol says it was a great day despite the weather.

Chol frequently hears about Thai people from across the country coming to visit and tour the area, following the story of the Thai royal family by visiting places marked by her plaques. One report stands out in her memory, from a young man in Chicago who brought his mother to visit.

"His mother sat down on the ground and prayed," she says, "and cried badly because she was so happy that once in her lifetime she got the chance to stand on the soil [where] the king of Thailand was born."

Since she began her mission to commemorate the path of the Thai royal family in Massachusetts, Chol has enjoyed a number of successes: gaining support of area businesses to pay for the plaques; rallying Thai people in the region, and throughout the world, to learn about this time in history and its importance; and getting permission from landlords and municipal authorities to put the bronze tablets up for all to see.

Like Thais around the globe, she is now in mourning and thinking a lot about the late monarch. She expects, in the coming days, many people will be stopping and looking at the plaques she's placed around Boston.

And learning about the first days of the man who would become King Bhumibol.