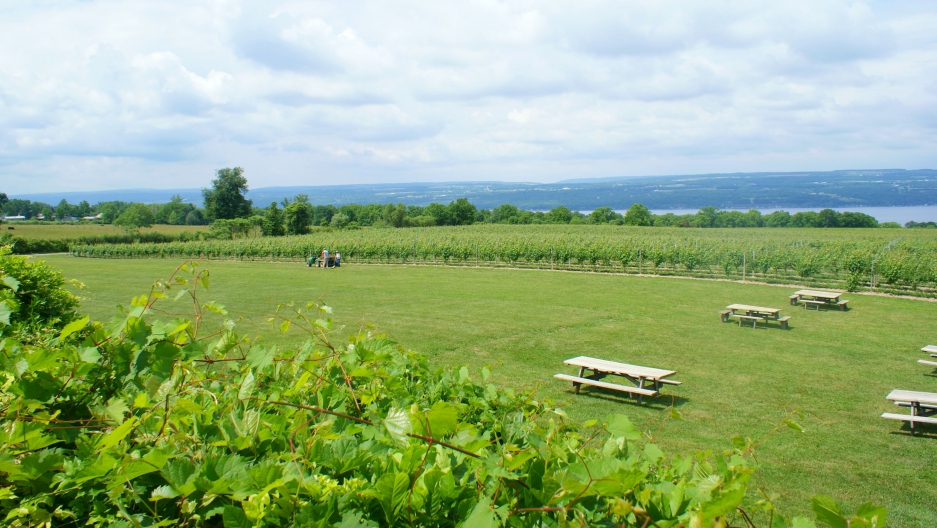 This is a view of vineyards on Seneca Lake in New York.

With the glut of natural gas from the fracking boom, the energy industry is digging deep for new ways to store it.

There are already over 400 underground storage facilities across the US in places such as old mines and depleted aquifers. But still more storage is needed — and now, some residents and businesses in the Finger Lakes area of New York have found themselves tangled in a long-term standoff with Crestwood Equity Partners, which owns a vast underground storage facility in the region.

More than 100 wineries, distilleries, and breweries are nestled in and around the Finger Lakes area. Their business pours brews (and dollars) into one of the area’s major industries: tourism, which is worth $3 billion annually and employs close to 60,000 people in the region.

Lou Damiani, who co-owns Damiani Wine Cellars on Seneca Lake, began planting grapes in the 1990s, when he and his partners realized the quality of wines the region could produce. Two decades later, vintners are still moving into the region.

“It’s a tough, competitive business, and every little thing matters in this business,” Damiani says.

Some people who live and work around Finger Lakes are concerned about a big thing affecting their business — namely, a proposal to store fuels below Seneca Lake, the region’s largest lake. In 2009, the company that’s now Crestwood Equity Partners submitted plans, currently under consideration by the New York State Department of Environmental Conservation, to store propane, butane and natural gas in the salt caverns deep beneath Seneca Lake.

The caverns beneath the lake are tied to more than a century of salt mining — a process which follows simple theories of water solubility. Mike Gilbert, a union worker at US Salt, says they pump millions of gallons of water down thousands of feet into the salt caverns at high pressure. After the salt dissolves in the water, they pump the brine back up into open ponds, where the water is evaporated to produce the salt used in everything from pharmaceuticals to the food at your table.

Local business coalitions like Gas Free Seneca and Finger Lakes Wine Business Coalition have publicly opposed the fuel storage plans. Gas Free Seneca even circulated a petition citing concerns about the project’s effects on air pollution, area tourism and water quality. They cite research that indicates that moving pressurized fuels in and out of the salt caverns could drive the salinity of Seneca Lake even higher.

And many Finger Lakes residents worry that storing fuels in the caverns could result in a leak like the recent disaster at Aliso Canyon in California. There, methane spewed into the air from depleted oil fields for almost four months before being plugged in February.

Outside Crestwood’s front gates, more than 600 people have been arrested while protesting the storage plans during the years they’ve been under consideration. David Braun, an anti-fracking activist who joined the protesters earlier this year, says that parallels with Aliso Canyon are unmistakable.

“Like the facility here at Seneca Lake, the Aliso Canyon facility was created from unlined holes in the ground that were never engineered to store anything, let alone highly pressurized, flammable gas,” Braun says.

But the Federal Energy Regulatory Commission has already approved the Crestwood natural gas expansion project. And the New York State DEC has not yet given its final approvals, but it found last year that the plan’s opponents had not provided adequate proof to support their concerns.

Geologist John Halfman, a local resident who has studied Seneca Lake’s salinity for 25 years, agrees with the DEC that storing fuel in the salt caverns is probably safe.

“If everything goes as planned, nothing’s going to happen, in which case I think it’s a good idea,” he says. “If there is some unfortunate mistake, then it’s a horrible idea.”

In a recent letter to the DEC, Crestwood conceded a partial win to protesters: They will no longer pursue plans to store butane in the salt caverns. The change eliminates 600,000 barrels of storage need, as well the need for new rail facilities to be built across the region. Propane, the company promises, will be delivered not by rail or truck, but by pipeline.

Local coalitions like Gas Free Seneca, however, are not impressed with Crestwood’s concessions. In a rebuttal letter addressed to Governor Andrew Cuomo, representatives of Gas Free Seneca reiterate ongoing economic and environmental concerns with storing natural gas and propane beneath the lake, calling the nixed butane storage a “minor part of the project.”

This article is based on a story from PRI’s Living on Earth, that first appeared on the Allegheny Front.