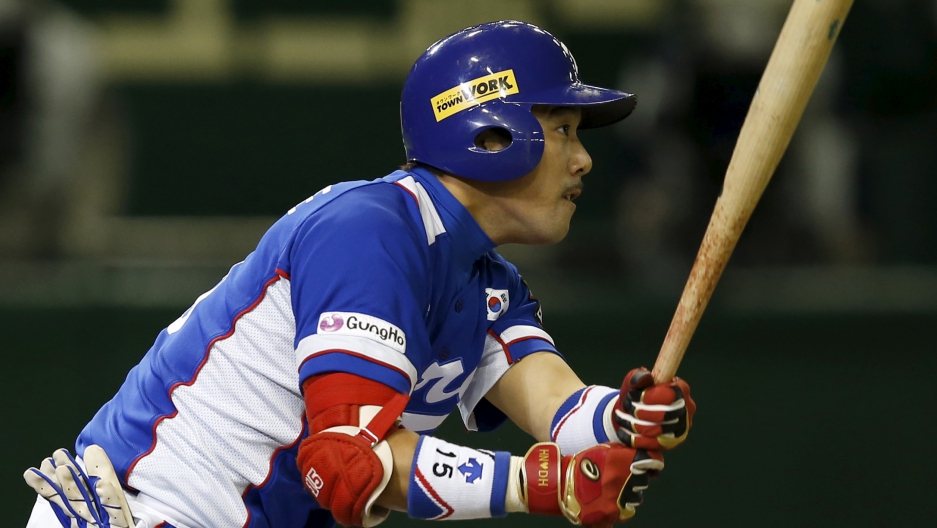 South Korea's Lee Yong-kyu watches the ball after hitting an RBI double at the Premier12 international baseball tournament at the Tokyo Dome in 2015.

And we're pretty stoked here in Boston, because the Red Sox are in the hunt this year.

This is also the last postseason for Red Sox slugger David Ortiz. Our much-loved Big Papi is about to retire. But there's one thing some baseball fans don’t love about Ortiz: After a particularly big hit, he's been known to toss his bat in the air, allowing it to flip before it drops to the ground outside the field of play.

Some baseball purists don't like bat flips. They consider them an "insult to the pitcher, the opposing team and all that's sacred in America's pastime." That's how ESPN's Mina Kimes sums up the disdain for bat flips here in the US.

But Kimes found an alternate bat-flipping universe — in South Korea.

Meanwhile, in the Korea Baseball Organization, bat flips aren't just permitted — they're embraced. "A bat flip isn't disrespectful here in Korea, which is a very formal, respectful country," says Dan Kurtz, a Korean-American who started mykbo.net in 2002 as a message board for English-speaking fans. "A guy flips and the pitchers don't do anything about it. It's just part of the game."

And what a game it is. Just check out Hong Sung-Heon.

Kimes expected to see a few bat flips at the Korean Baseball Organization (KBO) games she attended. But she was surprised by how often it happened.

"They just started pouring like a gusher of bat flips," she says. "And gradually I learned from going to a few games that this is a pretty common occurrence."

KBO hitters didn't reserve their bat flips for home runs, though they didn't flip after every hit, either. Kimes gradually learned what made a hit flip-worthy.

"I saw on average about five or six per game," she says. "What I started to hear is that you do it when you get a really good, solid hit. You know, you really get that good smack that makes a batter want to flip their bat."

So how did bat flipping become commonplace in the KBO despite being taboo in US Major League Baseball? Kimes suspects it's because the KBO doesn't have the MLB's unwritten code of retribution.

“There’s really no reaction," she says. "I think the pitchers are just inert to it.”

Bat flipping hasn't totally disappeared from the MLB, and some players like Big Papi continue to occassionally practice the scandalous art.

“He’s the most iconic bat flipper in the MLB right now,” Kimes says of Bautista.

As the playoffs continue, Kimes will be on the lookout for bat flips. Some fans think they're disgraceful, but others say they're fun, they’re harmless and they make the sport more fun to watch — something that’s important as the average age of baseball viewers isn't getting any younger.

“Fans love it," Kimes says. "I just really hope we’ll get to see at least one.”

If not ... tickets to Seoul aren't cheap. But you'd get a lifetime of bat flips.