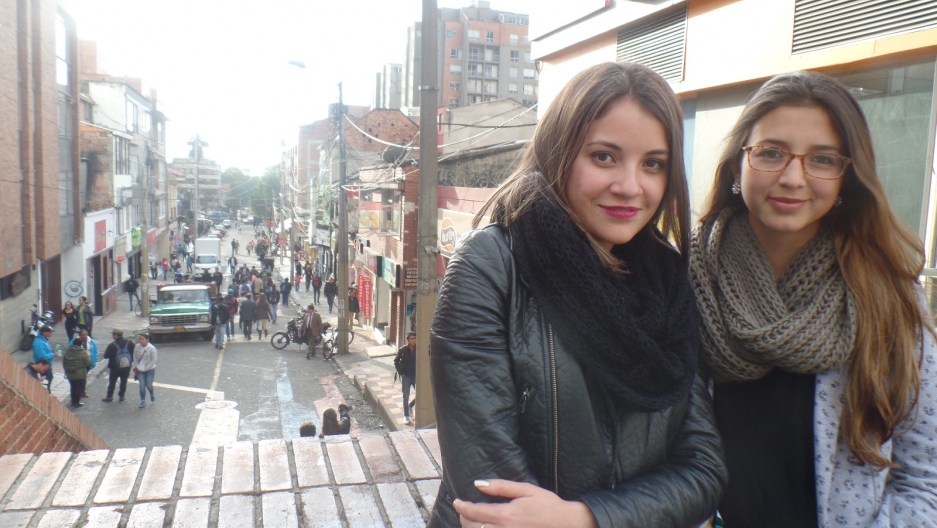 Anyi Cardenas, left, and Monica Lozano were concerned with how long it will take the parties to agree to a new peace deal.

For the thousands of Colombian women who suffered gender violence and sexual assault during the country’s armed conflict, this past weekend’s rejection of the peace process has left them and millions of others reeling.

"We are disappointed and the worst is that we do not know how long it will take to fix this," said Anyi Cardenas, a member of the Colombian Network of Gender-Sensitive Journalists.

Juana Teresa Callejas, a victims project researcher for "Yo sobrevivi," said the result showed "how polarized is the Colombian society." She was surprised the “no” vote won in cities including Santander and her hometown of Medellin, while rural regions most affected by the armed conflict voted “yes.”

"I'm very sad,” she said. But she pointed out she wouldn’t have wanted the peace accord to pass by only a slim margin because it needs buy-in from the community. “If the latter had won with such strong opposition, implementing the peace accord would have been extremely difficult," Callejas said.

Sunday's vote on the peace deal with the FARC guerrilla failed by the slimmest of margins, with 49 percent voting for it and 50.2 percent voting against it.

Leading up to the vote, negotiators have been working for years on structuring a peace deal that puts an end to one of the world’s longest running civil wars in which more than 200,000 people have lost their lives, and 5 million have been internally displaced.

The prominent role of women in the Colombian peace talks has been hailed around the world.

The final peace accord between the Colombian government and the FARC-EP was the first worldwide to include a gender perspective in each of its six main points, such as equal access to land distribution, warranties of protection and non-repetition of violence and political participation of women in decision-making and conflict resolution stages, among other issues.

Women soldiers make up more than a third of the guerrillas, and integrating them back into society was also one of the challenges of the reconciliation process.

"Never before in Colombia there has been such a deep discussion over gender in public policy as represented in this agreement. Though not perfect, it is a step forward," said gender and politics professor Maria Catalina Monroy.

However, many men and women who voted against the peace process said they did so because it didn’t take killings and human rights violations, such as assaults against women, seriously enough. Through the plan, the majority of those who killed, kidnapped, displaced, raped and assaulted women could avoid major prison time by admitting their crimes in exchange for amnesty.

Graphic arts student Alejandra Lamprea blamed the "no" result in the biggest cities on misinformation, as well as people who chose not to vote — turnout was about 40 percent.

Lamprea, 22, said she could barely understand why most Colombians did not care or believe in the peace process.

"I resent deeply the absenteeism because this was an opportunity and a right that was given to us to make history. We cannot ignore what happens to us," she said.

According to Lamprea, "building peace goes beyond an agreement signed by two parties. It was meant to be a complete reconstruction of a nation."

In that regard, Dora Delgado, 60, said in an interview that she supported the "no" vote because "a just peace" should include greater punishment for FARC members and more help for victims.

"None of us thought the 'no' vote was going to win, but we celebrate the outcome. It is right because now we can renegotiate and approve a just and lasting peace," Delgado said.

According to the latest statistics, 83 percent of all sexual assault victims during the armed conflict were women. In 2013, more than 3,105 accounts were reported but the trauma and fear of stigma or retaliation prevent some victims from reporting their crimes.

In 2016, there were officially 8 million victims of the Colombian armed conflict.

Natalia reported this story from Bogota.