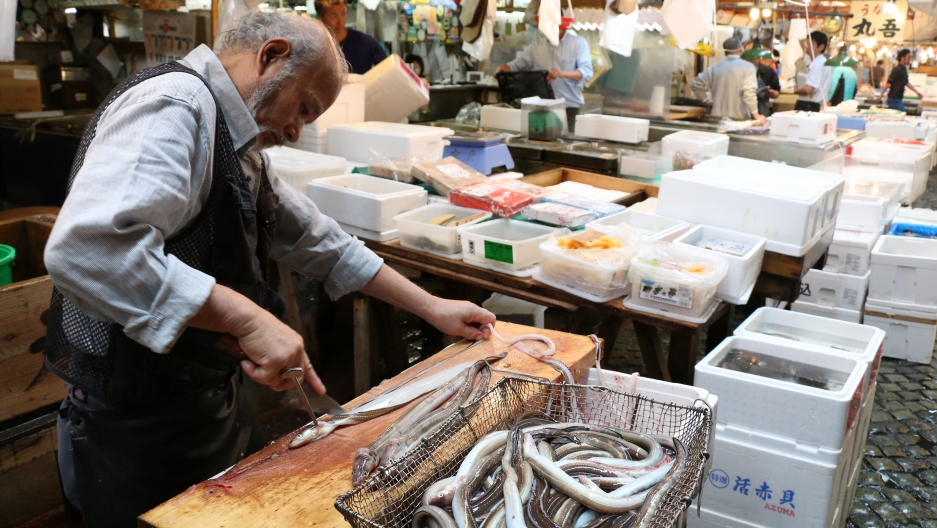 A Tsukiji shopkeeper prepares a basket of live eels for sale.

The world’s biggest fish market is Tsukiji Shijo in Tokyo, and it never stops moving.

All night long, refrigerated trucks deliver fresh fish from across Japan and frozen seafood caught around the world. At dawn, Tsukiji’s tuna wholesalers huddle in a chilly room and inspect what’s been hauled in.

“People with sense can tell the quality of the fish right away,” says wholesaler Eiji Kusumoto. “Those without? No matter how much they look at the fish, they won’t know.”

Kusumoto buys 10 to 15 giant tuna each morning at auction. He and rival fish sellers peruse and poke the tuna to decide how much they’re worth. This is serious business: a single fish once sold for $1.8 million.

When bells ring out across the auction floor, the appraisal period is over. Auctioneers holler out prices in a rhapsodic chant, and then the bidding starts.

When the auction’s done, Kusumoto’s tuna are loaded onto wooden carts and rolled to his stall on the market floor. He and his son cut the huge fish with band saws and toss the heads and other scraps into buckets. They lay the deep pink fleshy pieces out for chefs and shopkeepers to inspect.

At Tsukiji, there’s an art to that arrangement.

“We display the fish so that you can see the fat content and color easily,” Kusumoto says.

Fish sellers at Tsukiji display some of the world's highest quality tuna and some of the most expensive too.

Kusumoto and his son are the third and fourth generation of their family to do this kind of work at Tsukiji. And they’ll likely be the last. The market is expected to close this winter.

“The idea of Tsukiji ending is sad. I was raised here. I used to play in this market as a kid,” Kusumoto says.

It’s not the end for Kusumoto’s shop, though. He and many of Tsukiji’s other fish sellers are planning to move to a new market in Toyosu, across the river from central Tokyo. He hopes customers come too, but he’s not sure they will.

“There’s not much public transportation to Toyosu. It’s a pain for customers to get there,” Kusumoto says.

Naomichi Yasuda, a chef, rides his motorbike to Tsukiji every day to buy ingredients for his sushi bar. He says he’ll probably follow his favorite vendors from Tsukiji to Toyosu, but he might switch suppliers.

“I care for the result. This is the American way, the best result,” Yasuda says.

Yasuda ran a sushi bar in New York City for 30 years before returning home to Tokyo in 2011. He remembers hearing about plans to close Tsukiji before he ever left for America.

It’s taken so long because everyone in Tokyo seems to have an opinion about Tsukiji. The very things that give the market so much character, such as its flying fish guts and constant congestion, are what have led some people to push for a more modern facility. The city eyed a move for decades before settling on Toyosu. But even in the final days of Tsukiji, there’s still resistance to the new site.

“I’m strongly opposed. The soil there is bad,” says fish seller Reiko Takahashi. “There are all sorts of chemicals in the ground.”

The new Toyosu site used to be a Tokyo Gas plant, and Takahashi and her husband, Kanji, worry about lingering pollutants.

“It would be fine if they just fixed some things here, but it looks as if we’re being moved for a highway to be put in for the Olympics [in 2020]. It’s already been decided, so we have no choice but to go,” she says.

The Takahashis aren’t alone in their concerns. Though the city has spent years decontaminating Toyosu, Tokyo’s newly elected governor, Yuriko Koike, recently ordered new inspections of the site. And they’ve already uncovered some unsettling information. A basement level that should have been filled in with 4.5 meters of clean topsoil is still empty under a third of Toyosu’s buildings. And groundwater has seeped into an area slated to be a packaging facility.

In light of these discoveries, Governor Koike postponed the long-planned Nov. 7 opening of the market at Toyosu and ordered a thorough environmental review of the site. The earliest the move is likely to happen now is February 2017.

“Postponing the move puts the citizens of Tokyo first,” Koike said in a press conference announcing the delay.

In the meantime, the fish sellers wait. And so does construction of a highway that’s supposed to be completed before the 2020 Olympics, which can’t proceed until Tsukiji is demolished.

Tsukiji's shops are famous for commotion and clutter.

When Tsukiji does finally close, a cluster of neighboring retail shops, known as the jogai shijo or “outer market,” will remain.

“It will just be the outer market, and we have no idea if it will be able to live on by itself,” says Akiko Kawanami, who’s worried about a decrease in foot traffic.

Akiko Kawanami shaves katsuobushi flakes in her family's shop. She grew up in the building above it.

Kawanami’s family has operated a shop next to Tsukiji for 80 years selling katsuobushi — bonito fish that’s smoked, dried shaved and used as an umami flavoring. She grew up in the small building above the shop.

“I woke up in the hustle and bustle of the market, the little Tsukiji carts that run around making that ‘gaa, gaa, gaa’ noise, and the bells on all the bikes ‘ding, ding, dinging’ annoyingly loudly,” Kawanami says. “I’ve never had a quiet morning.”

And she isn’t hoping for one anytime soon.

Kerry Shannon contributed to this story.