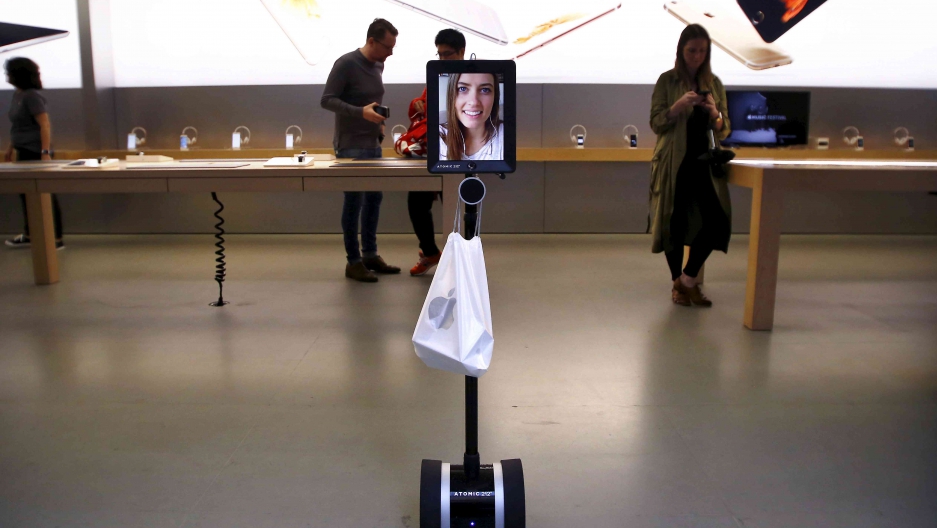 Lucy Kelly is seen on a screen attached to a telepresence robot, which she used to purchase her iPhone 6s during the official launch at the Apple store in central Sydney, Australia, September 25, 2015.

What’s the polite way to say “I can’t make it to your party, but my robot can”?

It’s not a question many advice columnists have considered, but it may soon be time for a definitive how-to. Most telepresence robots are currently marketed for use in offices, schools, hospitals and other places with smooth terrain and reliable Internet. But as Evan Ackerman recently found out, telepresence robots are quickly becoming capable of “standing in” for us in even more everyday environments — like a family trip to the zoo.

Ackerman, a Maryland-based contributing editor for IEEE Spectrum, sent a telepresence robot in his stead on a family outing to the Portland Zoo. From his home on the East Coast, Ackerman joined the group in Oregon using Double Robotics’ Double 2 telepresence robot — essentially a long-stemmed iPad case on wheels.

“You can log into this iPad from any computer with internet, anywhere in the world, and you’ve got full control over the robot,” Ackerman says. “You get a video feed of everything the robot sees, while your face takes up the whole screen of the iPad on top, so that people can see you and talk to you at the same time.”

To be clear, the Double 2 is not designed for off-road use on hot, ice cream-covered pavement — it’s one of the models marketed toward schools and offices — but Ackerman says it performed admirably at the zoo.

“It’s designed to be used where you have really good Wi-Fi,” Ackerman adds. But at the zoo, he skirted technical requirements by using an iPad with an LTE cellular connection.

“I wandered around with it and saw the elephants and talked to people, and it really worked pretty well. It wasn’t perfect all the time, but it was definitely usable, which is better than I was expecting,” Ackerman says.

And as with any flashy technology used in public, the robot drew gawkers.

“The most fun was just wandering around and having people who had never seen a robot like this interact with me,” Ackerman says. “I was talking to people in Oregon just like I was there, and I was explaining it as, ‘Look, I’m just sitting at home about 3,000 miles away from you, but I’m here to see the elephants, too.’”

Ackerman’s brother in Portland accompanied the robot, in part to make sure that Ackerman, navigating from Maryland, didn’t run into anyone. Despite the guidance, Ackerman says there were moments when the “out-of-body” experience proved unnerving.

“When my brother wasn’t right there minding me, I had this sense of ‘OK, there’s this robot that’s thousands of miles away from me. And it’s my body — kind of," Ackerman says. “But at the same time, someone could just pick it up and run off with it, and I wouldn’t be able to do anything. It’s a little bit weird.”

In the entire experiment, the robot’s network connectivity was the major drawback. But Ackerman thinks that with improvements to our network infrastructure — increased bandwidth, for instance — telepresence robots like Double 2 could reinvent armchair travel.

“I'm really excited for the future of telepresence,” Ackerman says. “Once we get this wireless infrastructure, you'll be able to take robots like these anywhere. And I'm imagining that at some point, there’ll be places where you can rent them. So you could decide ‘Hey, I want to wander around Singapore today,’ and you just get off the couch, get on the computer and log in, and suddenly you're in a robot. You can go explore Singapore and it's way easier than flying. And I'm not saying it's as good as being there, but you can do it from home and it's cheap. So why not?”