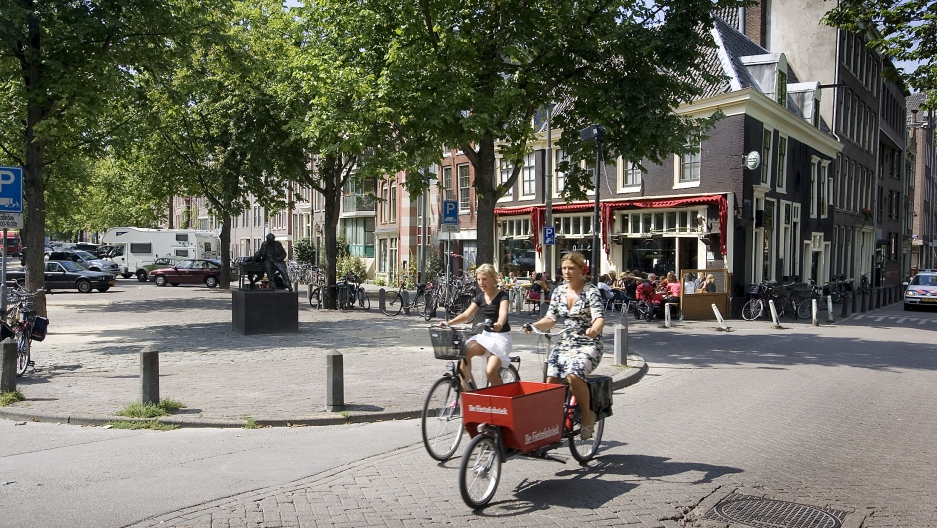 Two women ride their bicycles on the Lindengracht market in Amsterdam in August 2004.

Nearly every cyclist has had to, at times, quickly swerve out of the way to avoid drivers opening their car doors. Doing so is dangerous, and it recently claimed the life of a young woman from Somerville, Massachusetts.

There’s even a term for it: dooring. Or getting doored.

But doctor Michael Charney wants to make the road safer for cyclists by following Amsterdam’s lead.

He advocates for drivers to use what he calls the "Dutch Reach."

“The Dutch Reach is a practice where instead of using your near hand — usually the driver’s left hand — to open your car door, you use your far hand. Your right hand,” he says. “In doing that, you automatically swivel your body. And you position your head and shoulders so you are looking directly out. First, past the rearview mirror. And then, you are very easily able to look back and see if there are oncoming bicycles or cars or whatever.”

He says that in the Netherlands there is no name for this move. It’s just called opening your car door. The Boston Globe explains that “drivers there are required to use their right hand to open the door as part of the driving exam.”

This Outside Magazine video shows the Dutch Reach in action:

The Dutch Reach is easy and doesn’t cost a dime. It just asks people to change their behavior.

“It’s substituting one thoughtless habit with another thoughtless habit, except the second one is safer,” Charney says. “Hopefully, it will get baked into our society like it has with the Dutch.”

And that could make life safer for everyone.