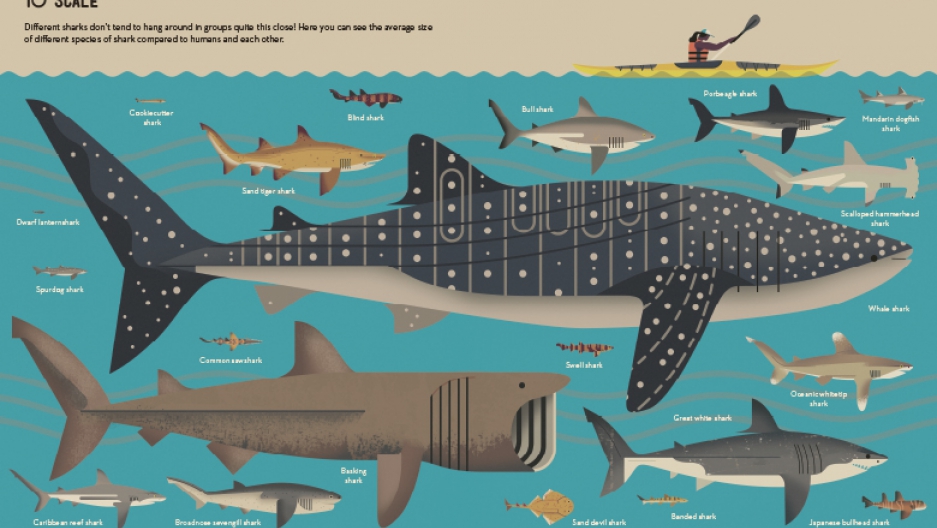 From “Smart About Sharks,” by Owen Davey.

School days are here again, so stuff your kid’s backpack with some worthy reading material. Here’s a short list of science-themed books for kids that we adults thought were pretty cool, too. 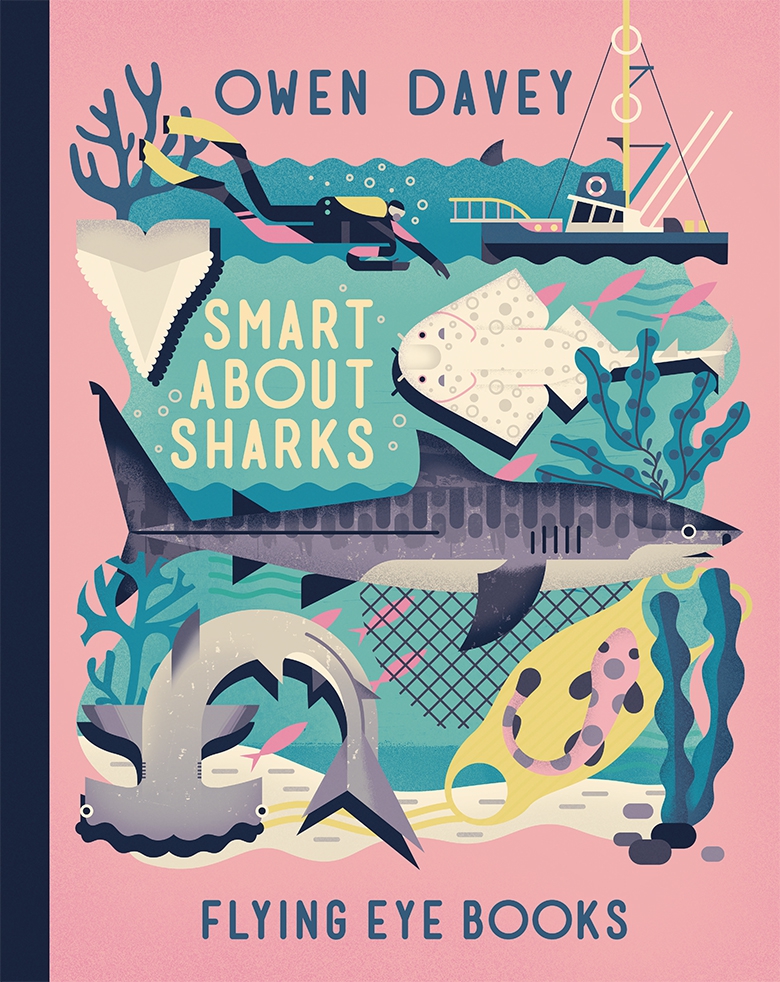 Sharks have been around for millions of years, yet they never get old. British author and illustrator Owen Davey’s "Smart About Sharks" is a pictorial sampling of the biology and behavior of the more than 500 shark species that swim our seas.

Ever heard of a cookiecutter shark? This species suctions onto victims with its mouth, then “twists its body around and cuts a circular chunk of flesh from the creature.” Gross, but cool!

Meanwhile, blacktip sharks have been observed herding fish into “bait balls,” which they attack “until nothing but a shower of fish scales is left.” Kids might particularly enjoy a section reserved for superlative sharks, which “awards” certain species for singular traits. Take nurse sharks, which lie next to each other along the sea floor and “probably deserve the title of laziest shark.”

Davey’s stylized illustrations are also appealing: The skillful assembly of geometric shapes and patterns captures the essence of his carnivorous, cartilaginous subjects. (Readers keen on Davey’s aesthetic might also check out "Mad About Monkeys.") 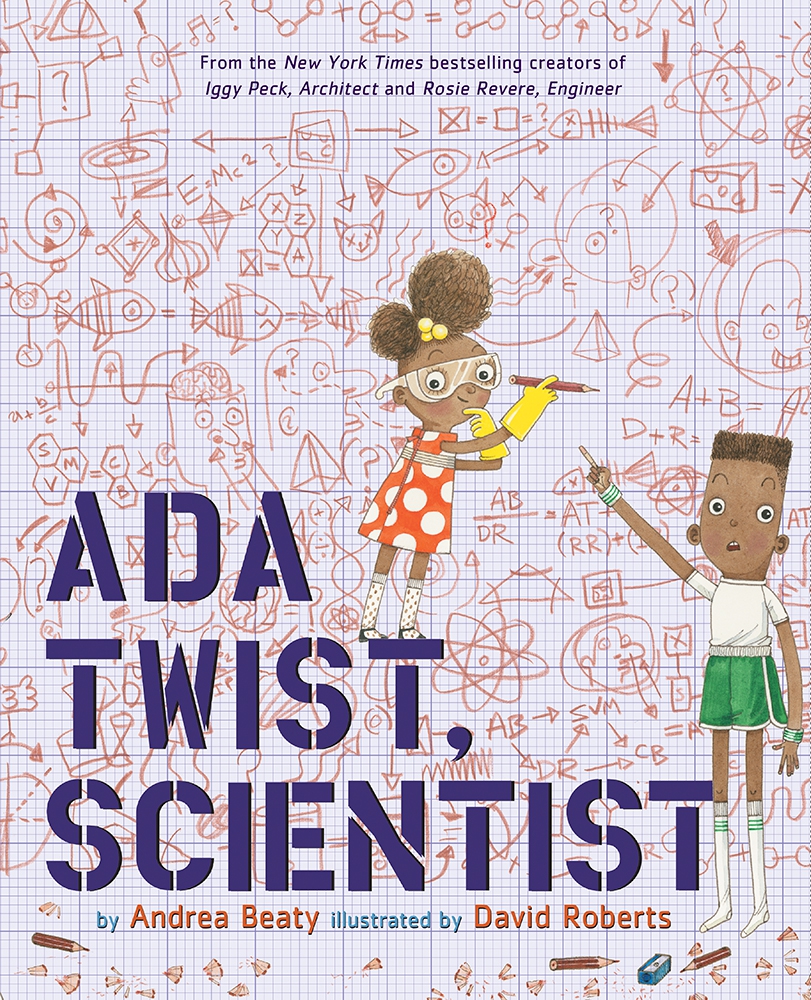 If your child’s favorite word is “why,” she’ll find a kindred spirit in Ada Marie Twist.

After quietly observing the world around her for the first three years of her life, little Ada Marie stuns her family with an onslaught of questions about how the world works. (Her names are derived, respectively, from Ada Lovelace — widely considered to be the first computer programmer — and Marie Curie, who discovered radium.) And she never stops asking.

Impressed by the giant clock in her house, for instance, she inquires, “Why does it tick and why does it tock? Why don’t we call it a granddaughter clock?” In seeking answers, Ada sets up experiments, leaving cluttered messes and general chaos in her wake. It takes a particularly vexing mystery — the source of a strange smell — for Ada’s family to make peace with her scientific pursuits. (Spoiler alert: They join her investigation).

Andrea Beaty’s clever rhyming is accentuated by David Roberts’ adorable illustrations, which brim with creative details that will stoke any young reader's curiosity. (If you like "Ada Twist, Scientist," there are two other books — one about an architect and one about an engineer — in the series.)

A scene from Ada Twist, Scientist, by Andrea Beaty and illustrated by David Roberts.

Who Built That? Bridges
An Introduction to Ten Great Bridges and Their Designers
By Didier Cornille
Princeton Architectural Press (October 2016), ages 8–12, $17.95

In 1883, a parade of circus animals, including 21 elephants, marched across the Brooklyn Bridge in a public demonstration of its sturdiness. Indeed, at the time of its inauguration, it was the biggest bridge ever built.

This iconic feat of engineering is one of many innovative bridges Didier Cornille tours in his book, the latest installment of the "Who Built That?" series (which has also covered skyscrapers and modern houses). Cornille’s clean, sparingly colored line drawings — which span long, rectangular pages befitting their subject matter — focus on important architectural and engineering elements, such as trestles and girders, while also drawing attention to scale.

For instance, one picture depicts a side-by-side lineup of cars, trolleys and pedestrians on Australia’s Sydney Harbour Bridge, emphasizing its status as the longest wide-span bridge in the world. Kids will also meet the brains behind the bridges, such as architect Norman Foster and designer Michel Virlogeux, who together conceived of the Millau Viaduct, a structure supported by cables attached to masts that traverses Europe’s Tarn Valley. Soaring 1,125 feet at its peak, it’s the tallest cable-stayed viaduct in the world. 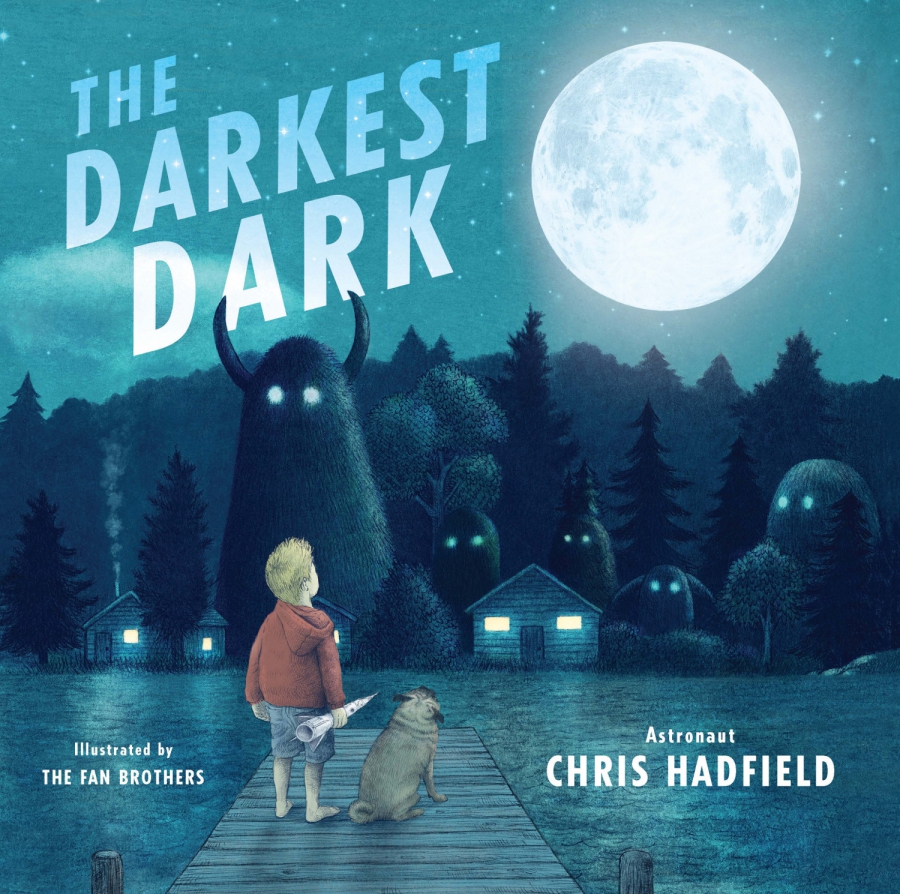 The Darkest Dark
By Chris Hadfield/Illustrated by The Fan Brothers
Little, Brown and Company (September 2016), ages 4–8, $17.99

Chris is a space-obsessed kid. He flies a (cardboard) spaceship and takes trips to Mars (in the tub).

He’s also scared of something that freaks out plenty of children: the dark. In one scene, a wide-eyed Chris lies in bed with the covers pulled up past his nose, surrounded by the glowing orbs of aliens conjured by his active imagination. But on the evening of July 20, 1969, Chris encounters a darkness he never fathomed when he and his family gather 'round a neighbor’s TV to watch history unfold: Neil Armstrong taking his first step on the moon.

“The darkness of the universe was so much bigger and deeper than the darkness in his room,” writes author and Canadian astronaut Chris Hadfield, who based the protagonist of "The Darkest Dark" on his younger self.

“For the first time, Chris could see the power and mystery and velvety black beauty of the dark.” Hadfield grew up to explore that darkness. Maybe some day your kids will, too. 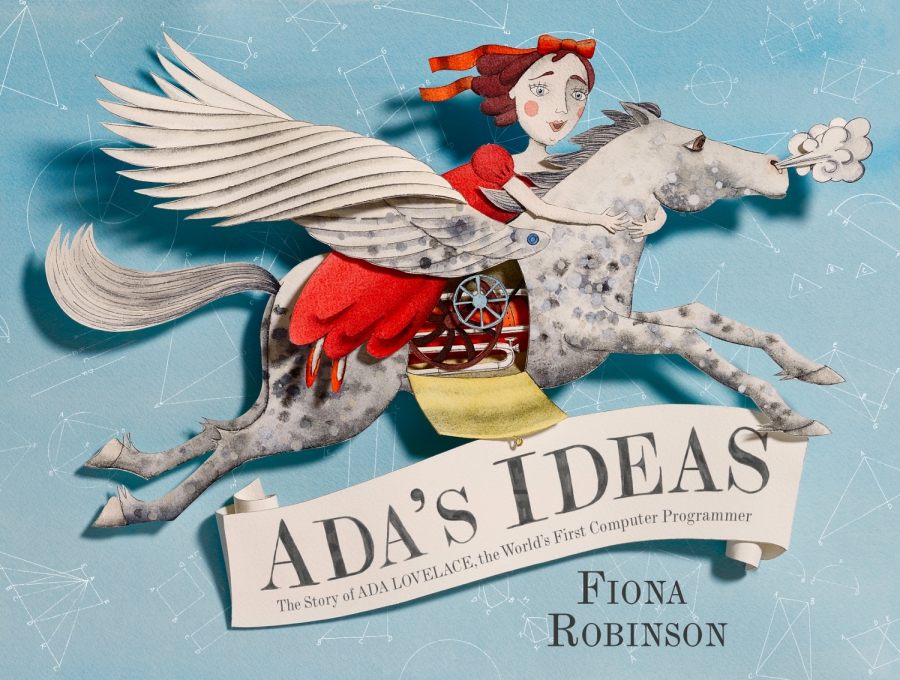 "Ada’s Ideas," an illustrated biography by Fiona Robinson, opens with a whimsical portrait of a young woman with a bow in her hair, riding a dappled steed through the sky.

The woman is Ada Lovelace, who once “dreamed of making a steam-powered flying horse,” and who is now widely considered the world’s first computer programmer. Through delightful cut-paper illustrations, Robinson touches on formative moments in Lovelace’s brief life (she died at 36).

For example, while growing up during the Industrial Revolution, Lovelace joined her mathematician mother on factory tours. A two-page spread of a young Ada climbing and cartwheeling over gears amid puffs of steam illustrates how her “imagination whirred along with the powerful engines!”

But Lovelace was a dreamer and a doer. At 17, she met polymath Charles Babbage. When he designed his “Analytical Engine” — a progenitor to the computer, in theory — Lovelace offered to write the program. Her inventive mind even went one step further than her counterpart’s: While Babbage thought a machine like the one he designed would only crank out calculations, Lovelace “believed it could be programmed to create pictures, music, and words.”

Talk about prescient. (For more on Lovelace and Babbage, check out this SciFri segment.)