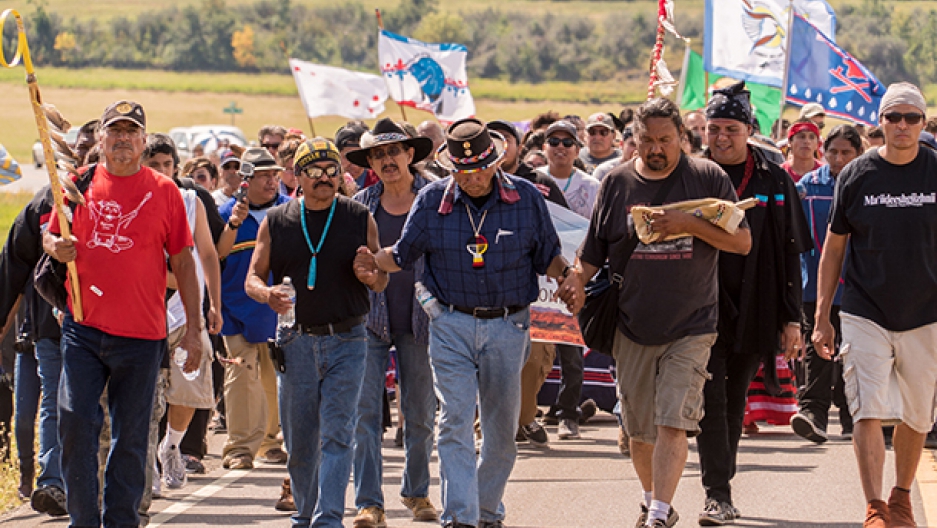 Demonstrators march near the Dakota Access Pipeline site that is opposed by the Standing Rock Sioux Tribe in court.

The Obama Administration’s decision to override a federal judge and temporarily halt construction of the Dakota Access Pipeline could mark a turning point in what has become a mass movement for Native American rights.

For years, Native Americans have seen their ancestral lands mined, flooded and appropriated, resulting in the desecration of holy ground, grave sites and artifacts. When the US Army Corps of Engineers approved a pipeline route through sites revered by the Standing Rock Sioux Nation, the action ignited protest, with thousands demonstrating and blocking construction.

After a federal judge refused to order a temporary halt of the pipeline on Sept. 9, the Corps and the US Justice and Interior Departments immediately stepped in and suspended the project on federally owned land. The government also urged the developers to stop work on an adjacent private property.

“I haven't seen anything quite this rapid before,” says Pat Parenteau, a professor at the Vermont Law School. “Literally within hours of [the] judge's decision, the government turned around and said, ‘We are going to stop the construction around the crossing of the Missouri River near the tribe's reservation. We are going to look at this again and maybe do a more full environmental review — and also, importantly, do a better job of consulting with the tribal government.’”

Parenteau believes word came down from the White House to take another look at the situation. Evidence had come to light that the company building the pipeline had bulldozed sites of extreme importance to the Standing Rock tribe. Additionally, reports of attacks on protesters with dogs and pepper spray sparked a national outcry.

Some say the action by the Obama Administration could turn around generations of bad treatment and bad faith. Parenteau agrees it could have significant implications.

“Native Americans have kind of fallen off the radar screen in terms of politics and in terms of attention,” he says. “I think this exemplifies that there's a strong feeling within what we call Indian country that they are suffering from a lack of respect and a lack of consideration from the federal government. The fact that there are 120 tribes on site at this point says a lot.”

Parenteau says the Corps failed to consider its obligations under the National Historic Preservation Act, which protects historic properties and archaeological resources and artifacts, including tribal relics.

“You can imagine how long the Sioux tribes have occupied these lands,” Parenteau says. “There are graves. There are religious sites. There are historic sites. This pipeline is running right through the middle of all of that, and there is evidence that some of the bulldozing that was done in a hurry, to try to beat the court's decision, did, in fact, destroy some of these artifacts.”

Also at issue is what's called government-to-government consultation on major projects, Parenteau explains. The Sioux tribe expected the highest ranking official of the Corps — the colonel at the district office in Omaha, Nebraska — to reach out to the tribal chairman and engage in discussions at that level. Instead, the Corps engaged only with the staff of the reservation.

“The federal government just has to learn that tribes expect a protocol that recognizes their hierarchy and to take advantage of that means of communication,” Parenteau says. “That, I think, is going to change.”

The federal judge who initially rejected a temporary halt showed plenty of sympathy toward the tribe and seemed to be "looking for a reason to agree with them," Parenteau says. "But when he went through the history of the miscommunication between the Corps and the tribe, he concluded the tribe was as guilty of failing to consult as was the Corps — that the Corps made these various overtures to tribal staff members and didn't get responses.”

In addition, the judge said the tribe failed to prove the construction was threatening or destroying some of their resources.

“This is called into question by the fact that there are some other indications that there actually was damage to tribal resources,” Parenteau says. “So, it's not entirely clear that the judge had all of the evidence in front of him. ... On appeal, it'll be interesting to see what happens with some of that.”

If the tribe can convince the court of appeals that there is an imminent threat to important tribal resources, they have a good chance of convincing the court to issue a stay and an injunction, Parenteau says.

“The scope of that injunction is still open to question,” he adds, “but I think there's enough of a serious question about the Corps’ compliance with the Historic Preservation Act — and there are some other laws that apply — that, as long as the court is convinced that it should step in and stop construction, I think there's a good chance it'll do that.”

This story is based on an interview that aired in PRI’s Living on Earth with Steve Curwood.