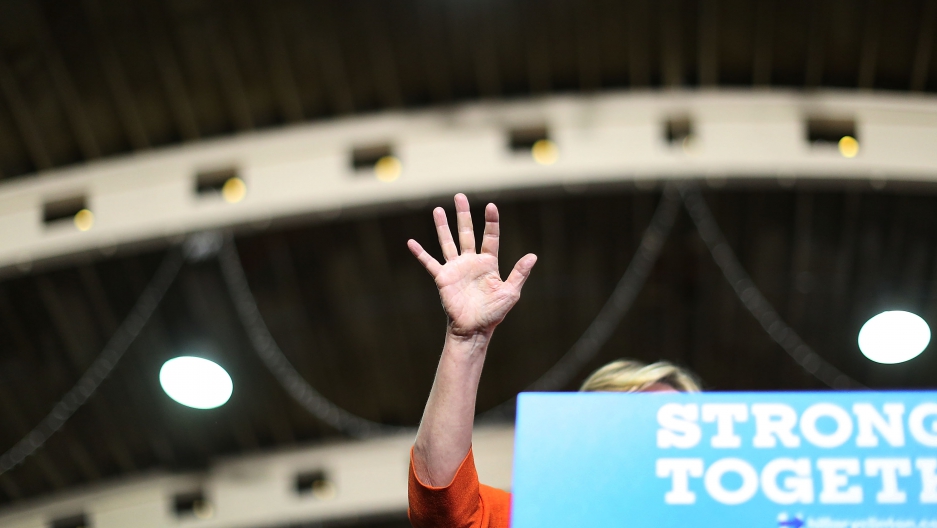 Hillary Clinton's arm passed the modesty test for one ultra-Orthodox Jewish newspaper in the US. This photo taken Aug. 8, 2016 was the first image they had ever run of the US presidential candidate.

Israelis are closely following the US election, but in newspapers read by ultra-Orthodox Jews, there are no photos of Hillary Clinton — and some editors say that won't change, even if she becomes president.

“If we write about Clinton and Trump, it’s much easier to run a picture of Trump,” Rabinovich says.

Yated Neeman's readers largely belong to a Jewish community known as Haredim, which means those who fear God. They represent about 11 percent of Israelis, and also live in the US and parts of Europe. They follow strict Jewish law, including rigid rules on modesty. Unmarried men and women avoid touching each other, women wear long shirts and skirts, and married women cover their own hair with hats, scarves or wigs.

Some ultra-Orthodox rabbis in modern Israel have interpreted modesty as a ban on publishing photos of women and girls.

“This is a known concept in the religious public,” Rabinovich says, and he quotes Psalms for its description of modesty. “All the glory of the King’s daughter is inwards.”

In Israel, there are four major daily papers serving the ultra-Orthodox. A reporter at the oldest one, Hamodia, says back in the 1970s when Golda Meir was Israel’s first female prime minister, they didn’t run photos of her, either. Women and girls are also absent from magazines, children’s books, and advertisements in religious neighborhoods.

Even though women are invisible in print, they are very much a part of the newsroom. Rabinovich says more than half of Yated Neeman’s journalists are women — although, to preserve their modesty, the newspaper publishes only the first initial of reporters’ first names.

So, what does an ultra-Orthodox newspaper do when its readers crave American election news, and one of the main candidates is a woman?

Rabinovich says, “there are a lot of approaches.”

One solution is getting creative with camera angles. In August, another Yated Neeman based in the US ran a photo showing Clinton at a campaign event, but with her face blocked by the podium. The photo of the candidate's arm was the first they had ever run of her person, several outlets reported.

Another answer is Photoshop. Rabinovich says his newspaper erases women from pictures. Other newspapers in Israel and the US have notoriously edited Clinton, Angela Merkel and other world leaders out of well-known photographs.

When the US Democratic candidate announced her running mate Tim Kaine, Yated Neeman ran a picture of a different Clinton — her husband Bill. Rabinovich says at the time, a correspondent for the secular Israeli paper Haaretz tweeted at him, “Hey, Yated Neeman, what will you do if Clinton wins — 4 years of Bill?”

“Without Bill or with Bill, we’ll manage,” Rabinovich tweeted back.

Within the Haredi community, there is some mix of opinion.

A few steps from Rabinovich’s house, I met Tova Yosfan and her daughter. Yosfan is a full-time nurse and a mother of seven. She says maybe it’s a stretch to put Bill Clinton’s picture in the paper instead of Hillary’s — but it’s not terrible.

“It doesn’t make me feel bad or take away my value as a woman that there aren’t pictures of other women in the newspapers,” she says.

At a wig store in the neighborhood, Dikla Cohen was helping a young couple pick out a wig for the wife. Cohen says she thinks newspapers have the right to choose what they publish. All the same, she says it wouldn’t be so bad to show a photo of Hillary Clinton.

“I don’t think there’s a problem to have her picture. It’s a character we all know. It’s not that we’re publishing half-naked models,” Cohen says.

Adina Bar-Shalom, the daughter of the late Chief Rabbi of Israel Ovadia Yosef, said she thinks the ban on Clinton’s picture is unnecessary. But she wouldn’t speak on tape about it — and she says she prefers to invest in other issues, like encouraging young Haredi men to gain skills for the workforce instead of studying religious texts.

Rabbi Yitzchok Frankfurter, editor of the American Orthodox Ami magazine, said that if Clinton is elected he might change his policy and print her photo — if the rabbis allow it. He said he worries about alienating the US government.

Rabinovich, however, says his newspaper isn’t even considering it.

“There has never been a picture of Hillary Clinton until today, and there never will be. Never,” he says. “Look for it and you won’t find it.”