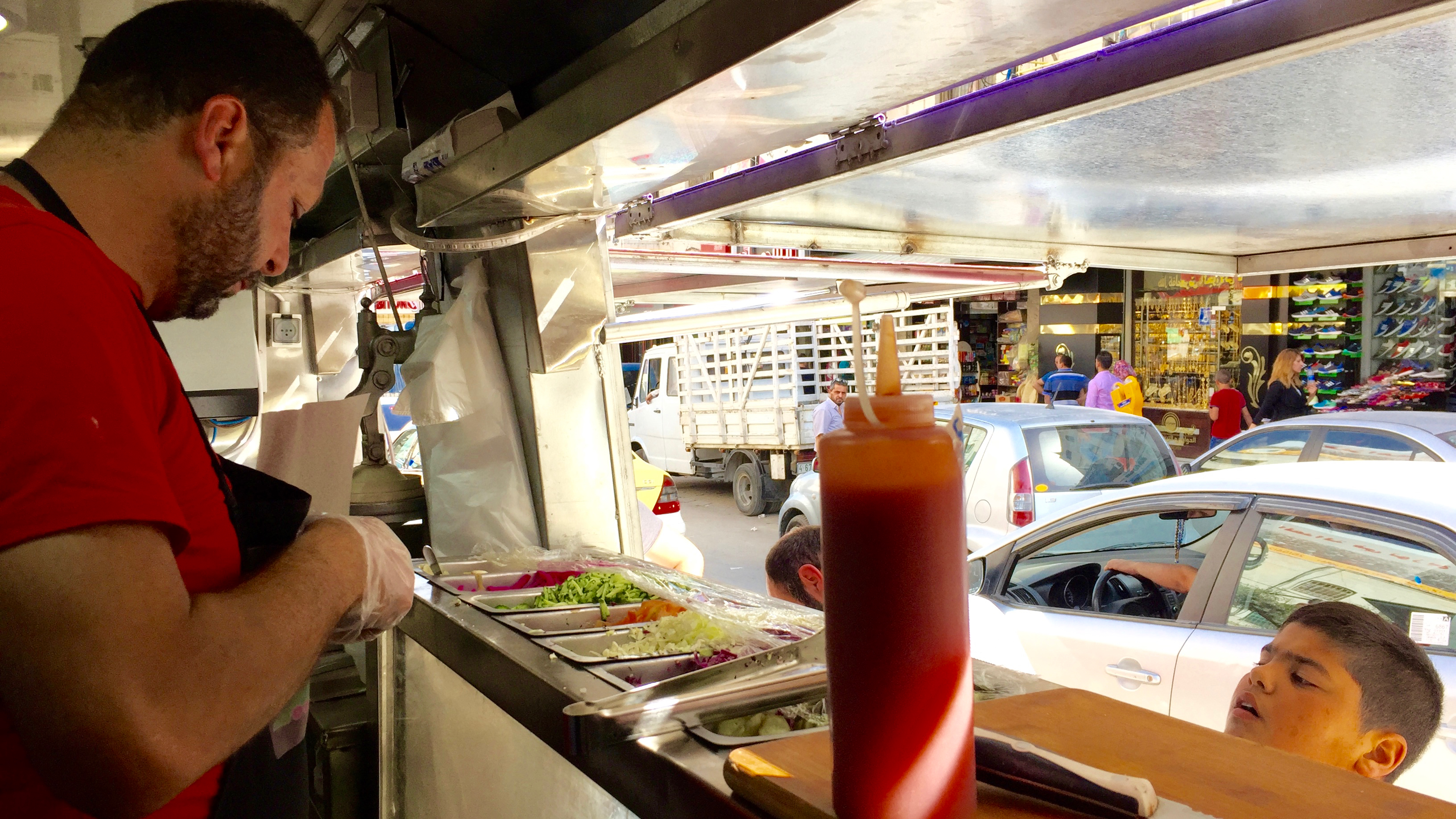 Khaldoun Barghouti, an ex-prisoner-turned-entrepreneur, serves up a chicken sandwich for a young customer in the West Bank city of Ramallah.

The sun is blazing over the city center in Ramallah, the de facto Palestinian capital. It’s at least 90 degrees at the main fruit and vegetable market, but that’s not keeping shoppers away.

Amid the hustle and bustle, a truck airbrushed in purple, red and green pulls up. A concession window slides open and the two men inside get to work. One starts up the deep fryer, while the other slices open loaves of bread.

It's known by the Arabic name “Qitar Ata’am,” which translates as “The Food Train.”

But Ramallah’s first food truck is similar to the ones rolling through the streets of so many US cities.

The truck is the brainchild of Khaldun Barghouti and AbdelRahman Bibi, two men who served close to a decade in an Israeli prison because of their association with banned groups. Behind bars, they thought long and hard about how to make a living once they got out.

"Prisoners don't want to be a burden on society,” says Barghouti, who studied IT, history and marketing, both inside and outside of prison. “We wanted to start a business without walls, so to speak, something that can give us freedom of movement."

Nearly everything about the food truck was inspired by the men’s time in prison, Barghouti says. They had the truck painted in bright colors to contrast with the drab tones of life in jail. Their menu even includes a concoction of tuna and corn similar to one they had in prison, morphed into a more refined delicacy.

All the sandwiches come topped with a heaping pile of french fries and diced vegetables, drizzled with a choice of tahini or garlic sauce.

Hole-in-the-wall fast food shops are all over in Palestinian cities, but a mobile kitchen in the form of a food truck is something very new here. The transportation ministry created a new kind of license for the business. And the challenges didn't stop there.

“The toughest thing was finding power,” says Bibi, who is 35. “The diesel generator we had been using for electricity was annoying and smelly. So we researched how other food trucks do it and found a green solution.”

They had a Palestinian company attach four large solar panels to the truck's roof, which generate enough power to run the small freezer, ventilation fans and display fridge.

The van and its signature panels have so far garnered a lot of attention, and a steady stream of clients.

“Let me get a sausage sandwich,” says Rami, a local 14-year-old.

“I like the idea that it works on solar energy,” he says. “It’s awesome!”

Barghouti and his business partner are betting big on the food truck concept. They took out a $37,000 loan, payable in five years, and the bank gave them a special low interest rate because of their ex-prisoner status.

“Everything was customized for this truck: the refrigerator, freezer and fryers,” Barghouti says. “I think the only thing we bought from a store were the knives.”

Barghouti, who has six children, and Bibi, who recently married, are seeing early signs of success. Numerous people — including other former prisoners — have been asking them for advice about starting their own food trucks, and there’s word that another one has started operating in the Gaza Strip.

“In the beginning, people were just curious about the food truck,” says Barghouthi, as he piles a sausage sandwich with toppings.

“People wanted to support us because we are former prisoners,” he says. “But now, they come for the food.”