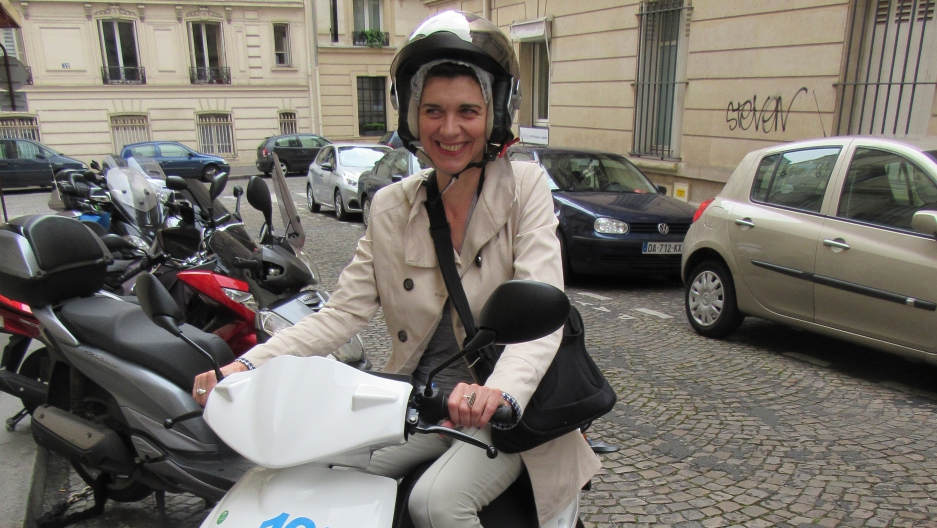 The author tries out an electric scooter belonging to CityScoot, a new share startup in Paris.

We all know Paris can be romantic, but it can also be — noisy.

Vehicles of all kinds clog the narrow congested streets, which makes scooters and motorbikes some of the best ways to get around.

Now a startup is adding some clean, quiet ones to the mix: electric scooters.

Vincent Bustarret of CityScoot explains the company’s system doesn’t use any dedicated stations for its fleet.

“We are using a free-floating system,” he says. “That means that all the scooters are geo-located, and that you rent the scooter, you ride it, and then you park it inside the CityScoot zone, which is inside Paris basically.”

Bustarret says this system has attracted 10,000 riders since the company got started three months ago. New users have to upload their driver’s license online to enroll. Then it’s pay as you go, about 30 cents per minute of use.

You book the scooters through a dedicated app, which locates an available vehicle. Then you receive a pin code on your cellphone, which you punch onto the scooter’s small keypad to unlock its mechanism.

Once the scooter is unlocked, you can lift the seat open and retrieve an adjustable helmet, accompanied by a disposable hair-net.

There’s no need to worry about battery life. When it gets low, a technical team comes to replace it.

And gone are the fumes. Obviously, there’s no exhaust pipe on an electric scooter. So gone too is the thunderous noise of a motorized vehicle. This machine’s wheels only make a slight, high-pitched whizzing sound as they spin.

As CityScoot’s Bustarret rolls the scooter down the street for a demo, he says its quietness makes it safer to ride.

“The good thing is that you can hear any vehicle around,” he says, “so for security, it’s even better. You can only hear the wheels hitting the cobblestones.”

So this intrepid reporter needed to try it out for herself.

Off I went around the block ... and I guess Bustarret wasn’t kidding about those cobblestones. As soon as I rolled over them, I was on shaky ground. In spite of that, the scooter seemed to just glide along.

I turned a street corner and realized I was on the Champs-Elysees, the largest and busiest avenue in Paris. And after a bit of hesitation, I launched onto it and even tried a bit of speed before returning to the shaky cobblestoned streets.

Soon, more Parisians are going to be able to enjoy those wheels, cobblestones and all. This month, CityScoot will double its fleet to 300 vehicles and expand it to 1,000 by spring.

CityScoot in Paris is a startup so there's no telling how well it will do. But we do know that the bike share model is proving successful.

Stations of bikes are placed throughout a city. People check out the bikes for short trips. There are over a dozen bike share systems in the US and Canada, like the Hubway in Boston, Bixi in Montreal, and Biketown in Portland.

"I think that's the key takeaway. There's over a thousand cities across the globe with bike sharing systems," she said. (Here's a list of more than 1,500 of them worldwide.)

Through her research, Shaheen has found that about 50 percent of bike share members say they are driving their personal vehicles much less.

"These systems are also leading to greater physical activity," she adds. "We've seen in our analysis of them that as you move away from the urban core, they tend to serve as magnets to get people to and from public transit."

There are various business models behind public bike shares — sponsorship one of the most prominent.

"Companies come on board and help to support and sponsor those programs. [Cities pay the rest.] And, in exchange, they are able to brand the bike sharing programs that are associated with them," Shaheen explains. "What does this do? It brings additional funds to the table and it keeps it possible to grow the fleets and have individuals paying relatively low membership rates and daily fees."

All of this is good news for cities, which seem to be benefitting from bike sharing.

"If the past is any indication, these bike share systems are going to continue to expand, become more technologically advanced, include more solar docking, include more access through smartphone apps and mobile payment systems, and they're also going to include electric bikes."