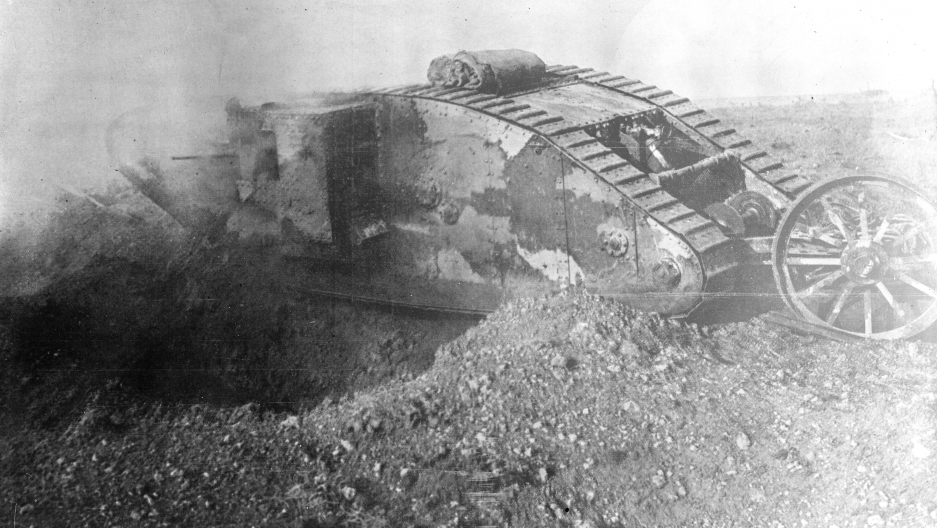 One hundred years ago Thursday, when tanks went into battle for the first time, warfare changed forever. These giant armored killing machines have been a central feature of combat ever since.

The first tanks were British, and they went into action against the Germans on Sept. 15, 1916, near Flers in northern France, during the Battle of the Somme in World War I.

Just imagine being a German soldier that day 100 years ago: You think you've seen every terror war can offer — machine guns mowing down your comrades, barbed wire traps, artillery blasting whole platoons to oblivion, poison gas torturing your friends who were too slow to put on their gas masks. You're probably a pretty hardened soldier.

Then from off in the distance comes rumbling a giant machine, rolling over craters and ditches and crushing through the barbed wire obstacles that have stopped so many infantry attacks before. Then it starts spitting death from its cannon and machine guns. You attack it with every weapon you have, but it simply can't be stopped. What do you do? You can stay and die, or you can panic and run.

The Germans on the front line ran that day. It was one of the few occasions in all of World War I when any defensive force broke off in terror. One survivor said after the war he thought they would have to retreat all the way to Berlin. (You can hear more voices from that day here.)

It was pretty daunting for those first British tankers, too. There was huge pressure on these men, most of whom were common infantry soldiers, to quickly win the war with an instrument that wasn't especially well-designed or easy to operate. Inside the tank, the men suffered from the engine's heat and choked on a toxic fog from exhaust fumes.

The tank was developed as a means to break the stalemate on the Western Front in World War I. Military technology of the time favored the defense. Even if an attack did succeed, it was almost impossible to exploit the breach before the enemy rushed in reinforcements to stabilize the front.

Early British pioneers conceived of the tank as a "land ship." It was developed in intense secrecy. The workers who built the first tanks were told the machines were mechanized water tanks, designed to carry water for the troops in the deserts of Mesopotamia, in what’s now Iraq.

The workers called them "water tanks" or simply "tanks" for short. And that's how the armored vehicles got their name. One of the British officers who helped develop the tank, Ernest Swinton, liked the nickname and made it official.

The first 50 tanks were sent to France in August 1916 to join the big British push that summer along the river Somme.

They were thrown into the attack on Sept. 15 with little preparation. And the Germans weren’t the only ones surprised when tanks showed up. Almost no British troops had seen a tank before, and British commanders had few tactical ideas about how to use a tank in battle.

The journey from the UK had been stressful on the 30-ton machines, and almost half of them broke down before coming into contact with the enemy.

They managed to advance a couple of miles through two of the three German lines, inflicting heavy casualties. But lack of communication (they had no radios) and lack of coordination with infantry and artillery stalled the attack.

Some historians have criticized the British High Command's decision to deploy the tanks, arguing there were too few of them to make a decisive difference, and that their principle advantage — shock and surprise — was somewhat lost as the Germans could begin preparing weapons and tactics to counter them.

But Germany only ever built 20 of their own tanks to counter the thousands eventually built by the Allies during World War I.

The British were the first to use them, but the French were also developing tanks in secret. The early French tanks were even less well-designed than the first British ones. The armor was too thin on one, and the tracks too narrow on another. Later in the war, the French car company Renault produced a new design. The Renault FT was the first with that distinctive feature of modern tanks: a rotating turret on the top. (The British heavy tanks all had their weapons on the side.)

The Renault FT light tank was probably the best tank of the war. It was much more maneuverable than the British tanks, yet had effective firepower. It had less armor and as a result was more vulnerable, but it was mass-produced and designed to swarm the enemy. It was a good enough design to stay in use till after World War II in some armies. The Renault FT was also the only tank to see combat with the American Expeditionary Force in France, going into action for the first time in September 1918.

Americans also made a key contribution to the development of the tank. It was an American, Benjamin Holt, who perfected the caterpillar track — another classic feature of the modern tank. Holt filed the patent in 1907, and his Holt Manufacturing Company of Stockton, California, was soon mass-producing tracks for agricultural and logging vehicles.

In the final few months of World War I, the Allied Forces were finally able to deploy tanks en masse, as the tank’s pioneers had envisioned. Thousands fought in the big breakthrough battles from August 1918 until the end of the war. The Germans had developed effective tactics to combat tanks, with armor-piercing rounds from artillery. But these tactics weren't enough to slow the overwhelming force. Germany surrendered.

And yet it fell to the Germans, humiliated by their defeat in 1918, to develop the tactics and strategies of tank warfare that led to their spectacular successes in the early years of World War II.

Categories:
Conflict & JusticeConflictPoliticsThe World That Was