A few years ago, when Sorin Grama had just finished graduate work at MIT and was looking for a place to build his new solar electricity startup, he came across an old abandoned warehouse.

“My partner and I were looking at it and said, ‘Well, it’s a lot of space here, maybe others can join, it’s kind of lonely,’” Grama says. “We put out a call to the MIT community.”

Within weeks, a handful of startups were sharing that cavernous space.

“And we bonded. All the companies created a nice community, and we started sharing tools, people and ideas, and reading each other’s proposals for funding, things like that,” Grama says. “We had a great Christmas party one year.”

But the warehouse was slated to be torn down. The entrepreneurs stuck together though, and relocated. Soon, five companies became 20, and they needed a third, even bigger site.

Today, their home is a massive old mid-19th century pipe factory in Somerville, just outside of Boston. It’s called Greentown Labs, and it's one of the most successful in a new wave of what are called green business incubators, clusters of startups looking to build a business by helping cut carbon emissions and fight climate change.

The companies here could easily go and rent office space anywhere. But these entrepreneurs need space to roll up their sleeves.

And they're saving money doing it at Greentown. If you need a power saw or an industrial press, no need to buy your own — just sign up for a time slot in the machine shop.

And then there’s the networking. Greentown resident Aaron Acosta is a recent MIT grad and CEO of the five-person startup Rise Robotics, a company working on energy-efficient robotics. Acosta says they came to Greentown for the lab space, but stayed for the community.

“It’s like a pack effect, where when someone is pulling away and doing really well out at the front, the group can see that and then chases after it. It’s the, ‘If they can do it, I can do it,’” Acosta says. “And then if you’re falling behind, then you can be like ‘Help!’ And they can pull you along for a little while until you’re up and running again.”

Vasu points out companies as we cruise the vast space. One is working on small satellites, another on energy generation from sewage. Yet another is working to convert trash to energy.

“Basically landfills, when they’re capped, generate methane," Vasu says. In the atmosphere, methane is a powerful greenhouse gas. But, he says, “if you can actually capture that methane efficiently, it can be used as a fuel source.”

Growing up and moving out

The startups are physically separated just by masking tape on the ground. One small area is empty and abandoned. The company that used to occupy it — Altaeros Energies, which makes high-altitude wind turbines, suspended in the air through what's called helium aerostat technology — got too big and needed more space.

The company Altaeros Energies outgrew Greentown Labs, which is part of the point.

Of course outgrowing the incubator is part of the point, showing there’s money to be made tackling the world’s climate and energy challenges.

It’s a growth area that the Commonwealth of Massachusetts is betting on, putting millions in grants and loans toward a network of green tech incubators. Steven Pike, interim CEO of the Massachusetts Clean Energy Center, says it’s an efficient way to spend.

“We can try and go out and try to support individually 50 different companies,” Pike says. Or, Massachusetts can invest in an incubator that supports 50 companies under one roof.

He says Massachusetts has an audacious goal: “We want to be the Silicon Valley of clean energy, renewable energy.

“And I think we’re well on our way there. I would argue that we are there.”

Of course to reach that goal Massachusetts will need some big winners. Imagine Silicon Valley without the likes of Apple, Google, or Hewlett Packard, and the Bay Area loses some cache.

No breakthrough clean energy companies have come out of Greentown Labs, yet. But like Altaeros Energies, some businesses have begun to leave the safe confines of the incubator behind and fly on their own.

Bags of malt are stacked at the Magic Hat brewery in South Burlington, Vermont. Purpose Energy, a former Greentown firm, is using its new technology to turn much of the brewery's waste into energy and fertilizer.

Energy with a purpose

One of them, Purpose Energy, is helping cut the carbon footprint of the brewing industry, and the first commercial rollout of its technology is about 200 miles up the interstate from Boston, at Magic Hat Brewery in South Burlington, Vermont.

If you tour the brewery with someone from Magic Hat, you might start at the sacks of malt and hops that are key to their craft brews.

But if you tour it with someone from Purpose Energy, you’re more likely to start at an electric generator that helps power the brewery’s operations.

Magic Hat was one of Vermont’s first craft brewers, and it now distributes its beer around the world — nearly 51 million bottles a year. And roughly a third of the electricity running the brewery comes from a system designed by Purpose Energy, which turns some of Magic Hat’s wastewater into methane gas fuel.

“They were trucking between three and five loads every day of their highest strength brewery waste,” Kuno says, “the stuff that really couldn’t go down the drain because it would clog up the municipal wastewater system.” 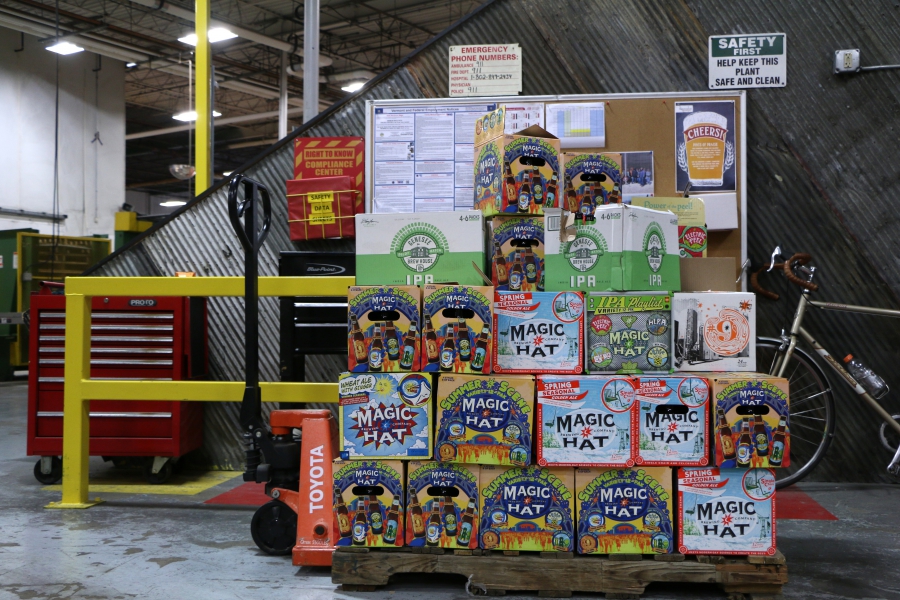 Magic Hat Brewery churns out nearly 51 million bottles a year. Roughly a third of the electricity needed to run the operation comes from a system designed by Greentown alum Purpose Energy to turn wastewater into methane gas fuel.

Getting rid of all that waste was costing the beer maker big money, not to mention the pollution from all those trucks. But Purpose Energy was already working on a way to convert a good chunk of the waste from places like breweries, farms or food production facilities, into fuel.

Now, instead of getting shipped offsite for disposal, Magic Hat’s wastewater gets pumped into a huge tank, or digester, primed with special bacteria. The bacteria chew up the waste in the liquid and basically belch out methane gas, which is captured and used to run that generator.

Left behind is cleaner water, which can get sent to the municipal system, and a small amount of sludge, which gets used as fertilizer on a local farm.

Kuno himself cleans out the digester every couple of months. When he does, he gets covered in sludge — black, grimy stuff — almost head to toe.

But he says he doesn’t mind, and the result is worth it. The digester has helped slash the brewery’s overall carbon footprint.

Which explains the company’s name.

“Not only are we making energy,” Kuno says, “but there’s a purpose behind making that energy. And that purpose is a more sustainable energy future for the world." 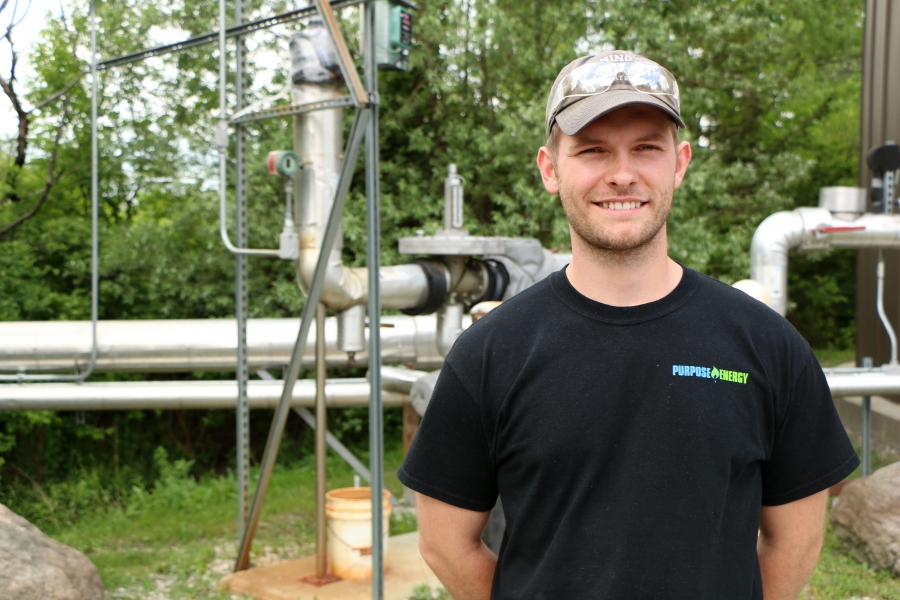 Magic Hat was Purpose Energy’s first client, and Kuno says Greentown Labs was a big part of the company’s success so far as “a really just high-energy place for a young and budding business to grow.”

And grow they did. After Magic Hat, the company got a second contract with a brewery in Delaware, and will soon be working on a third digester system in Hawaii.

Along the way, Purpose Energy emerged from the Somerville incubator and settled into its own new headquarters near Boston.

By itself, the company won’t save the world. It might not even become the game-changing business that’s needed to really help make Massachusetts the capital of green tech.

But it’s evidence that green business incubator spaces like Greentown Labs can help small companies make a difference, and maybe even make it big. 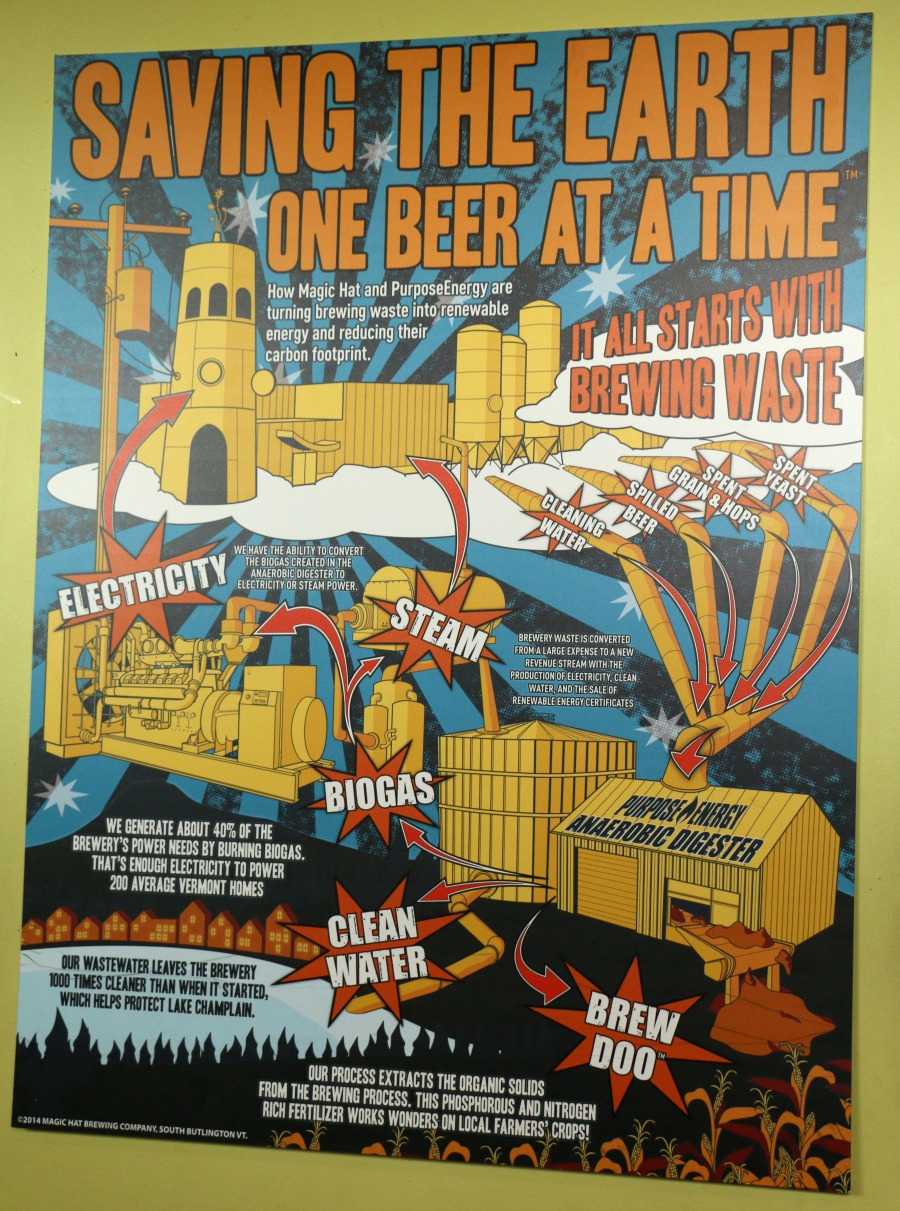