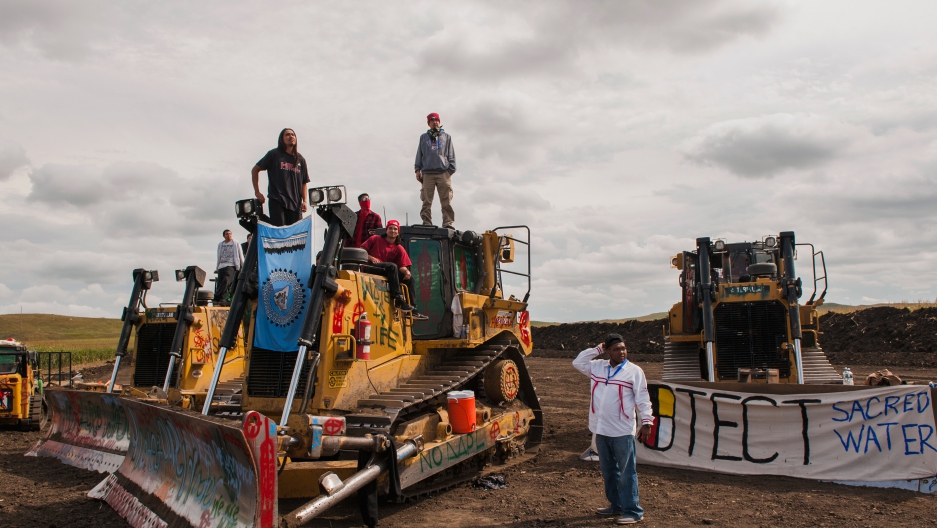 For weeks, members of the Standing Rock Sioux have gathered in Cannonball, North Dakota standing against what's known as the Dakota Access pipeline.

The 1,172-mile pipeline is a $3.7 billion dollar project that would carry about 470,000 barrels of crude oil a day from North Dakota to Illinois.

Its route would take the pipeline under the Missouri River, just upstream from the Standing Rock reservation, and Sioux tribal members say this would threaten their drinking water and sacred sites.

Hundreds of other tribes in the US and Canada have pledged support for the Sioux nation, and thousands of activists have traveled to North Dakota to stand with them.

It's considered one of the largest Native American movements in recent history, and president of the Native American Journalists Association Jason Begay finds it “quite remarkable.”

“I have not seen anything like this in my lifetime,” Begay said, adding that he’s heard that more than 250 tribes have shown their support for Standing Rock.

The entrance to the Standing Rock camp is lined with dozens of flags from Native American and Indigenous communities around the world.

The support ranges from government officials, activists and celebrities to people who’ve collected donations in their communities and sent them to North Dakota.

The ultimate demand is an end to the pipeline. But Begay says the tribes also “want to be heard” as a matter of principle.

“They want to be part of the whole process of the planning of the pipeline,” he said. “They feel like they did not have any say whatsoever despite [the fact that] if anything went wrong they would be [some] of the first to be affected.”

The construction site is less than a mile from the Sioux reservation and lies on federal land. The project has been overseen by the US Army Corps of Engineers.

Last Friday, a federal judge ruled against the Sioux nation's attempt to stop the work — but immediately after that ruling, the US government ordered construction on the pipeline to halt temporarily.

“The Army will not authorize constructing the Dakota Access pipeline on Corps land bordering or under Lake Oahe until it can determine whether it will need to reconsider any of its previous decisions regarding the Lake Oahe site under the National Environmental Policy Act or other federal laws," the order said. "Therefore, construction of the pipeline on Army Corps land bordering or under Lake Oahe will not go forward at this time.”

Begay says the government’s decision showed the importance behind Standing Rock’s solidarity against the pipeline.

“They know what they’re doing,” he said, adding that Native American tribes deliberately came together to oppose the project peacefully.

Clouds roll over the Standing Rock camp on Sept. 3, 2016. The camp has expanded from its original site, Sacred Stone camp, which is located across the river and over a small hill, out of sight. Over Labor Day weekend there were hundreds of people representing more than 250 tribal nations at the camp.

“They’re being very careful on how they’re going to be portrayed in the media because they know this is the age of social media,” Begay said. “This is a very strategized movement and it’s working for them so far.”

“For the first month or so of the movement people relied entirely on Facebook updates to see what’s been going on,” Begay said, and only recently has the case gotten mainstream media attention.

Supporters who can’t make it to North Dakota have been using the hashtag #NoDAPL to show their opposition to the project. Here are a few of their tweets:

It's not IF the Pipeline Leaks, It's WHEN!#NoDAPL

Whether you're there physically, in spirit, sending donations or on social media making your voice heard, you're apart of this. #NoDAPL

What we are seeing in ND is more than protecting the water; we're seeing the biggest demonstration of NDN sovereignty in 100+ yrs #NoDAPL

For every non-Native person who ever stood there and asked what you can do to help: #NoDAPL. Whose side are you on? pic.twitter.com/i9pOz3Xhb6

Jason Begay is an associate professor teaching journalism at the University of Montana. He took a group of his students to Cannonball, North Dakota, over Labor Day weekend. You can check out their work here.