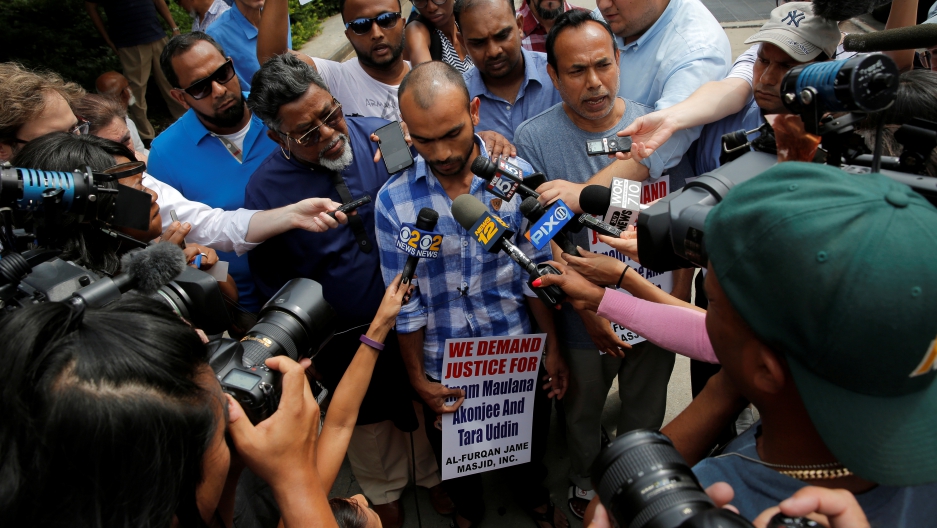 Saif Akonjee, in the center, and Mashuk Uddin, right, speak to reporters at the Queens Criminal Court before the arraignment of the man who allegedly murdered their father and brother. Imam Maulama Akonjee and his assistant, Thara Uddin were killed in August. Prosecutors are investigating the motive, but the community here thinks it was fueled by Islamaphobia.

Yunique walks around her Brooklyn neighborhood in stylish, loose clothing that skims over her body and a gray shawl that's delicately draped around a baseball cap.

It's not evident right away that she is dressed modestly because she is Muslim. The only giveaway of her faith might be if she decides to share her last name with you: Saafir, which means ambassador in Arabic.

She is 28 years old, born in Jamaica and now at home in Brooklyn. Saafir was first introduced to Islam when her mother converted to the Nation of Islam in Jamaica. She remembers being intrigued by how, all of the sudden, her mother seemed happier than ever before by going to the mosque in St. Catherine, Jamaica.

One day, her mother sat her down to talk about her love for her newfound faith and invited her to come to the mosque with her if she wanted to. 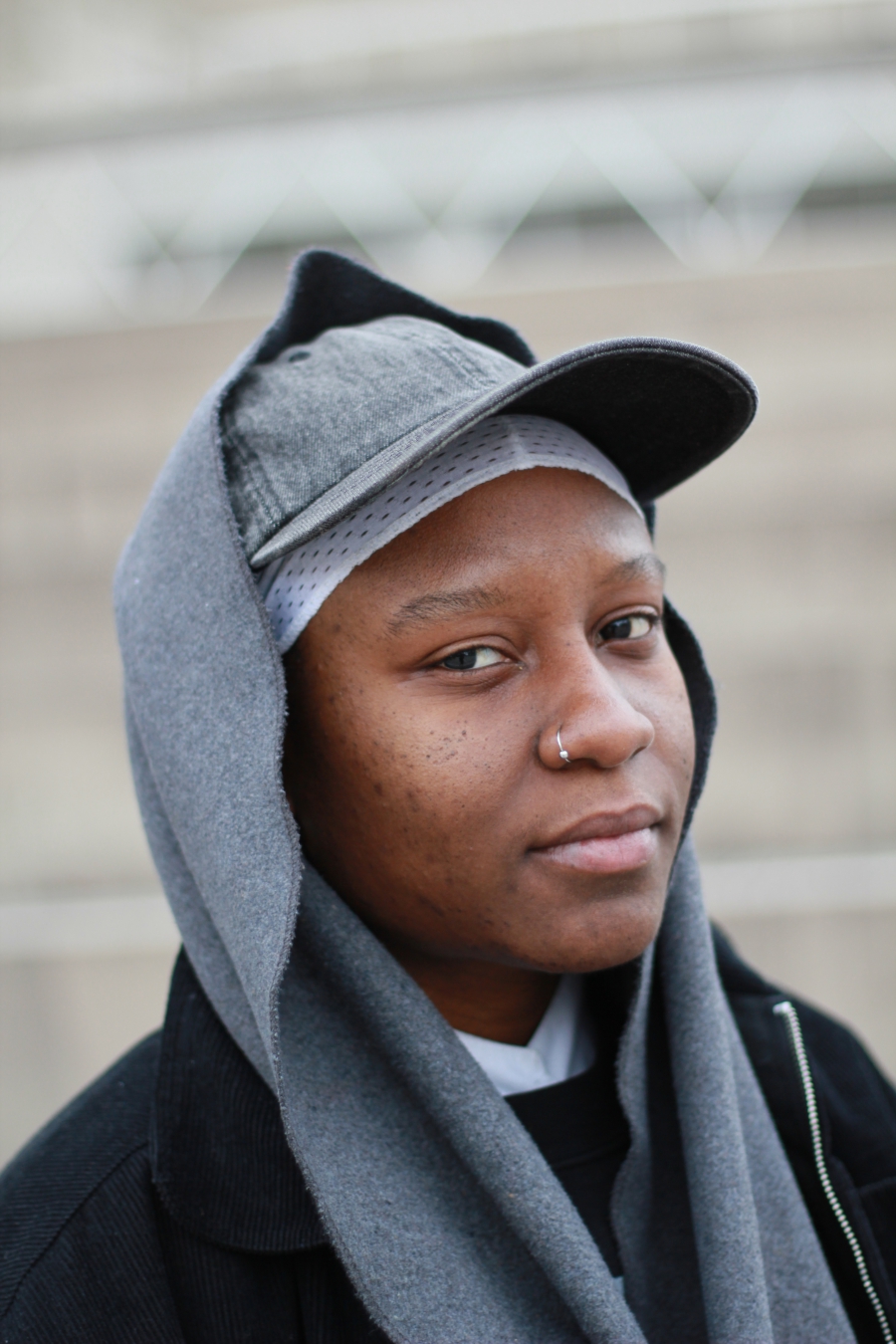 Yunique Saafir felt the pull to convert to Islam when she learned about the faith’s emphasis on racial and gender equality.

Saafir decided to join her. She says she instantly found “a spiritual happiness.” She recalls feeling the pull to convert when she learned about Islam's emphasis on racial and gender equality, something that was already important to her at 11 years old as a result of being raised by a socially conscious family. She decided to convert soon after her first visit to the same mosque her mom visited in St. Catherine, now called the Islamic Council of Jamaica.

In 1999, after living in America for eight years, Saafir continued to explore her spirituality and experimented with being Mormon. Mormonism appealed to her because she saw a lot of similarities between Mormonism and Islam. She felt that the church didn't include blacks well, though. Last year, Saafir returned to Islam, finding it even more meaningful in her life than before.

“There was a yearning to go back to Islam,” she explains. “I made a conscious decision that this was the religion I wanted to practice. Internally, it didn't sit well with me to not practice Islam while being queer,” she says.

In some ways, though, it's still difficult to understand why Americans like Saafir decide to embrace Islam in the years after 9/11.

According to a 2010 study by the Association of Religion Data Archives, the number of Muslims in America increased by 67 percent in the decade following the Sept. 11 attacks. There were 1 million Muslims in 2000; by 2010 that number increased to 2.6 million. By 2015, there were 3.3 million Muslims in the US. Other studies say conversion and immigration from Bangladesh, India and Pakistan are the main reasons for the dramatic increase.

It isn’t that being a Muslim in America today is easy. Less than a month ago, an imam and his assistant were shot and killed in Queens, New York. Imam Alauddin Akonjee, 55, and Thara Miah, 64, served a mostly Bangladeshi community. Many people in the Queens neighborhood of Ozone Park believe escalating Islamophobia was the motive for the murders. Prosecutors are still investigating the possibility that it was a hate crime.

According to the Center for the Study of Hate and Extremism, which gave its analysis of FBI data to the New York Times, the rate of hate crimes against Muslims in the United States has tripled since the Paris attacks and mass shooting in San Bernardino, California at the end of 2015 to 38 per month. In the years prior, there were 12.6 suspected hate crimes towards Muslims monthly.

And depictions of Islam post 9/11 in the news and popular culture are rarely flattering.

Media Tenor, a research institute that evaluates data for NGOs and governments, looked at reports by Fox, NBC and CBS from 2007 to 2013 to analyze how Islam was represented by the major media outlets. Over 80 percent of the media coverage on NBC and CBS was negative while over 60 percent of the coverage on Fox was unfavorable, with stories about international terrorism and conflict getting the most airtime. The study also found that in most cases, Muslims were not included as featured experts on Islam.

(See more recent examples of coverage of Islam on broadcast television, from Real Time with Bill Maher to CNN and Fox New segments.)

So why are Americans converting to Islam when, by some measures, the US is becoming increasingly intolerant of Muslims?

According to Asma Afsaruddin, professor of Near Eastern Languages and Cultures at Indiana University Bloomington, there's heightened interest in Islam in the last 15 years precisely because of the publicity surrounding it.

“Despite Islamophobia, thoughtful Americans who are curious about the real nature of Islam might go out of their way to discover the teachings of the religion from reliable sources,” she says.

Afsaruddin, author of Contemporary Issues in Islam, says many students in her classes are drawn to the egalitarian aspects of Islam.

“They find it remarkable that there is so much emphasis on the equality of human beings and gender egalitarianism, particularly in the early history of Islam. If you have been a victim of social injustice, you're looking for ways to combat such issues, particularly if you're a young person.”

A former student, Afsaruddin says, decided to convert to Islam after taking her class and being exposed to Islamic beliefs.

“For many young people, studying Islam comes as an eye-opener because there is such a contrast between the willful misrepresentation of facts sometimes in the media and what they encounter in scholarly books regarding Islam and its history,” she says.

That was true for Teresa Kane.

In the spring of 2007, she was a graduate student at George Mason University in Fairfax, Virginia. She had 30 minutes left to choose a class in order to meet a student loan deadline. While flipping through the course catalogue, she came across an elective called “Islamic Religious Life” which piqued her interest.

Although she grew up Catholic and still wanted to continue a relationship with God, she disagreed with her church's views on same-sex marriages and divorce and stopped attending services. She kept studying her faith though, taking classes on eastern religions and on the Bible as literature. Islam was a subject of curiosity.

“All I knew was that if one in five people followed this religion, it couldn't be as violent and awful as the media portrayed,” she says.

Kane was surprised to learn that the religion checked off boxes she didn't even know she valued. The more she learned about some of the core Muslim teachings around feminism, social justice and environmentalism, the more interested she became. Soon after, she decided to convert.

A Pew Research study tells us that about 20 percent of Americans who identify as Muslims are converts. Although most Muslims say that Islam is incredibly important in their lives, most adherents also agree that there is more than one way to interpret the teachings of Islam.

Having freedom to decide what kind of role Islam would play in her life is what finally convinced Kane, now 36 years old, to convert. She befriended a Muslim woman at George Mason University and she asked her if converting meant that she had to cover her hair and that she couldn't kiss people she liked.

Kane’s friend told her, “That's just between you and God, sweetie!”