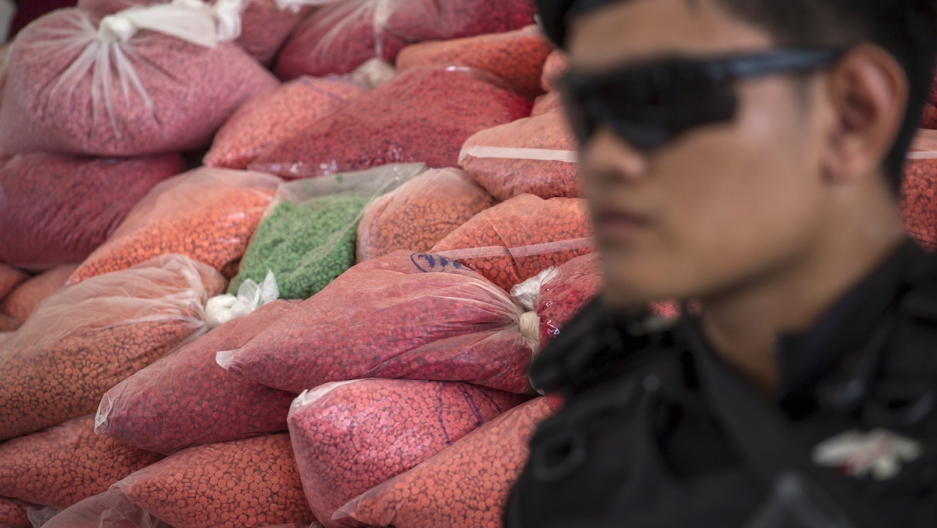 A police officer from the Narcotics Control Board guards bags of methamphetamine pills during a drug destruction ceremony north of Bangkok, Thailand, June 26, 2015.

The war on drugs is futile. So why not just decriminalize meth?

It’s not a sentiment you’d expect from senior officials in any authoritarian country — let alone from a strait-laced army general, draped in medals, who came to power in a coup.

He’s talking openly about a potential new diktat, issued by military rulers, that would allow citizens to smoke meth without fearing prison.

“The world has lost the war on drugs,” said Thailand’s Justice Minister Paiboon Khumchaya, according to Reuters. “Not only Thailand.”

These are startling statements in a country that, as it stands, still executes drug traffickers.

The Thai government’s drug policy is quite harsh. After all, in recent decades, the nation’s police have largely mimicked the zealous drug war mindset propagated by the United States.

Yet now, seemingly out of nowhere, this typically rigid junta is spouting soft views on narcotics — namely meth — that fall somewhere to the left of many Colorado stoners.

“This is unprecedented,” says Pascal Tanguay, a Bangkok-based associate with the International Drug Policy Consortium. “They’ve actually been talking about different models from decriminalization to full-fledged legalization.”

Talks to decriminalize meth may seem premature for a country that still locks people up for smoking low-grade pot.

But in Thailand (and much of Southeast Asia) meth is far more popular than pot. It’s cheap, potent and enjoyed by rich and poor alike.

More than 90 percent of all drug arrests in Thailand involve meth: either little pink meth pills, cut with caffeine, or high-purity baggies of crystal meth.

The hills just across its border, in Myanmar, are run like fiefdoms by narco-militias.

Many of these armed syndicates operate with tacit permission from Myanmar’s military. In other words, the drug labs next door to Thailand have total impunity to churn out meth — and there’s not much anyone, even a military junta, can do to stop them.

In Thailand, as in the US, meth users are often depicted as crazed, homicidal zombies — a view cultivated in part by the Thai state, which launched a vicious drug war last decade that left an estimated 2,500-plus dead.

Many Thais are indeed using meth without exhibiting the worst symptoms. In Bangkok, dealers on motorbikes will deliver baggies filled with crystal meth for about $70. The substance resembles finely crushed glass and, if smoked, offers a blast of supreme confidence — supercharging the ego and lending an exhilarating vibe to mundane chores.

“You get an inner energy that wipes away fatigue,” says Wut, a Bangkok taxi driver in his thirties. He frequently smokes meth between passenger pickups.

But if he goes days without sleep, he says, the vigor sours into twitchy paranoia. “By day three, I hear weird voices in the distance,” he says. “I have this indistinct feeling that I’m being monitored or stalked. I'll think everyone I pass is plotting against me.”

But legalization, he says, would enable the government to oversee the manufacture of cleaner meth, cooked up in a regulated facility instead of a dirty jungle lab. The drug could be meted out to adult users in set amounts per week or month.

It could also be heavily taxed, of course, and ideally the proceeds would fund treatment centers — which users like Wut could visit if their habit spiraled out of control.

However, after seriously discussing the legalization option, junta officials indicate that leaping to this model straightaway could be too jarring.

They’ve hinted at a more palatable scenario: a Portugal-style system in which small-time meth users skirt prison. Serious traffickers, however, are still hunted down and jailed. Thai authorities are also discussing decriminalizing marijuana and kratom, a leafy herbal stimulant.

From the junta’s perspective, the most compelling reason to decriminalize meth involves badly clogged prisons.

Thailand’s per capita incarceration rate is worse than China’s and on par with Russia’s — though not quite as bad as in the US, a world leader in locking up civilians for drug offenses.

Some Thai cells are currently so packed that inmates must sleep while spooning with strangers on dirty floors. Many are non-violent drug offenders — so decriminalization would help flush them out of the system.

Activists have long badgered Thai officials about bad prison conditions without much success. But in recent years a Thai princess, Bajrakitiyabha Mahidol, has taken up the plight of prisoners as a personal cause.

In Thailand, royally backed initiatives are highly influential among elite lawmakers and treated as sacrosanct. The princess-led campaign — called “Kamlangjai,” which means moral support — urges Thai society to feel compassion for inmates, particularly pregnant women, and for “those who have made mistakes.”

This, Tanguay says, has helped to “trigger a furious rethink” of crime policy.

If Thailand actually decriminalizes meth, it would be veering away from the hardline anti-drug stance pushed by the US, its most powerful patron.

This would also produce an unexpected outcome: strict authoritarian rulers appearing more merciful toward addicts than Washington policymakers, who have a habit of lecturing Thailand (and other nations) on human rights.

Moreover, other junior partners in America’s drug war could potentially feel emboldened to take the decriminalization route — though they would likely risk losing US anti-narcotics funding.

But, for now, it’s unclear whether or not this decriminalization push will amount to anything more than “politicians making nifty promises that never turn into anything real,” Tanguay says. “But this is a level of openness that has never happened before.”