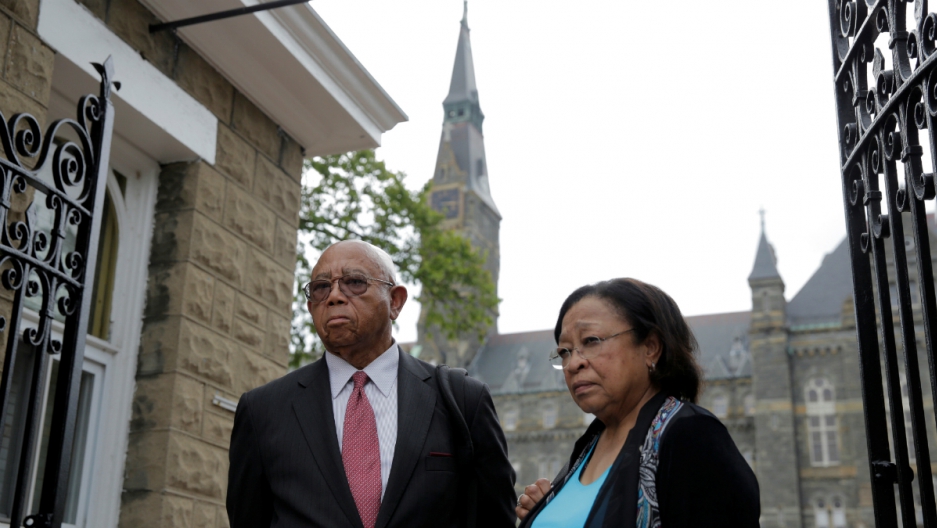 Joe Stewart and Patricia Bayonne-Johnson, both descendants of people sold as slaves by Georgetown University, arrive to hear about moves aimed at encouraging dialogue about the university's ties to slavery.

Last week, Georgetown University, in Washington, DC, announced it will offer preferential admission to the descendants of slaves whose labor benefited the university.

"I think that's beautiful,'' says Jonathan Jansen, who grew up in South Africa during apartheid and was one of the country's first black deans, at the University of the Free State. He is now a fellow at Stanford.

Jansen thinks that while Georgetown needs to do more, the school is off to a good start.

“What Georgetown is in fact saying is that there is unfinished business. And we are going to, as a university, deal with that unfinished business," Jansen says. "And I’m hoping that all universities ... like my own formerly all-white university, would be able to have the humility and the grace to acknowledge that the shadow of the past still haunts us and that we can do something about it.’’

But he believes the school needs to do more than just try to make up for what happened. Jansen says that something like the Truth and Reconciliation Commission, which was established in South Africa after apartheid to transition the country to peace, could also work for the United States.

"[Reparations] is the end of a process. Not the beginning. In the South African experience, many of the victims of the violence weren’t asking for money, weren’t asking for material reparation. They were saying, ‘Just tell me what happened, just acknowledge that you were there. Just connect with me on a really human level with the truth.’ And I think that’s a much, much greater need among people."

“I do think there is validity across continents ... of having people come together and sort of saying, 'Let’s talk about what happened, in the near and distant past, and let’s figure out how we can deal with that past,’" he says. "I don’t know another way of bringing people towards those ... goals, except by bringing people around a table for purposes of truth telling."

However, some South Africans were disappointed with the commission's results; they wished more people had owned up to their actions. Jansen feels that way too. But he still that thinks the process made a difference in his country.

“At least there were enough people from the clergy, from the business world, from the police force who came and said, ‘I can’t take this anymore. I need to talk. I need to get this off my chest.’ And that created grounds for victims then to come forward and say, ‘You know, I hear you. It hurts me. You did a terrible thing, but let me reach out and see if we can move forward.'"

According to Jansen, we’ve all waited too long already.

"And so I think not just in the United States, in South Africa, [but] all over the world, in Rwanda as we speak, in the former Yugoslav republic, the longer you wait to deal with it," he says, "the more difficult it becomes going forward."