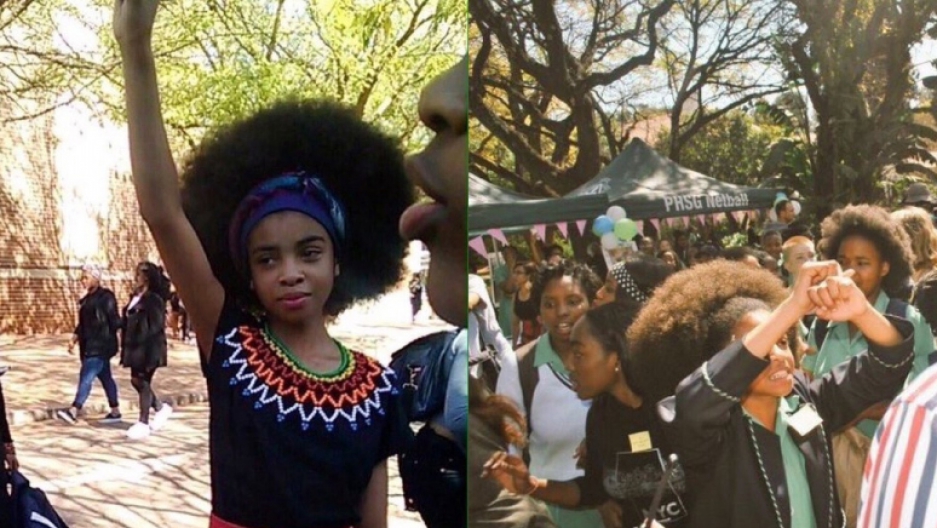 Protests at the Pretoria High School for Girls.

The passage of time does not necessarily correlate with natural progress forward.

Such is the case in South Africa.

Twelve years after the end of apartheid, black students at Pretoria High School for Girls in Pretoria, South Africa, were told to chemically straighten their hair.

This past weekend, students with afro hairstyles and braids gathered to protest the longstanding rule.

I wasn't this BRAVE when I was her age! Everything about her is life and life in abundance! #PretoriaGirlsHigh pic.twitter.com/KfcROh6ti8

The students’ outcry has been heard by local politicians, and education officials are looking into the students’ concerns. The rules have now been suspended according to the BBC and the school says it will work with the authorities to address the issues raised by the girls.

Tiisetso Phetla graduated from Pretoria High School for Girls in 2014. She says the so-called “rule” is an unwritten one that is still enforced. When she first applied to the school, she had an afro.

“I got accepted to the school thinking that it was okay to have an afro, because they give you a code of conduct to read and sign, and there is nothing with regards to African hair or an afro in the code of conduct,” she says.

“When I got there I was told that I looked very untidy and looked as if I wasn’t part of the school uniform.”

School staff asked her to chemically straighten her hair.

“They would remind me every day,” Phetla says. “I refused; because if I use chemicals on my hair, my scalp gets extremely damaged … it really burns.”

According to Phetla and other students, if they didn’t straighten or braid their natural hair, they were not allowed to come to class, but would instead be sent to detention.

Students protesting were also critical of the school's language policy.

“Where can we be black if we can’t be black in Africa?”

Pretoria High School for Girls is a prestigious school that was historically attended by whites before the end of the apartheid. The school is still run by white administrators. Phetla says with a student population of 1,500, only five members of the staff are of color.

“The problem is that in 1994, when South Africa was set free from apartheid, they didn’t dismantle their old code of conduct; they just added a few rules to try to accommodate the black child,” she says. “They didn’t go back and dismantle everything and welcome the black child. The black child was never welcomed. They were just accepted for education purposes.”

All of this shows how racism is still alive in South Africa, according to Phetla. “We are only free in terms of where we travel and how we travel, but in terms of us being black and being able to express ourselves, we still have a very long way to go.”

But the new generation of black kids is not accepting the status quo. They organized the protest and Phetla says they're compiling a new code of conduct.

“These new kids are revolutionaries. It’s scary to think they were born in 2002, but they aren’t having any of it.”

“These kids don’t want to look Western. They are not Western. They want to look African. Because they are Africans and this is South Africa. They refuse to conform to the Western ways that they try to impose on us and which they were very successful in my generation in imposing.”

As for her own generation, Phetla says the majority of them are embarrassed for staying silent all this time.

“When you are inside the institution, they teach you that it’s OK for them to indoctrinate you,” she says. “They teach you that their ways are the correct ways, African ways are barbaric. Every connotation with the African culture they take it back to being in a barbaric sense."