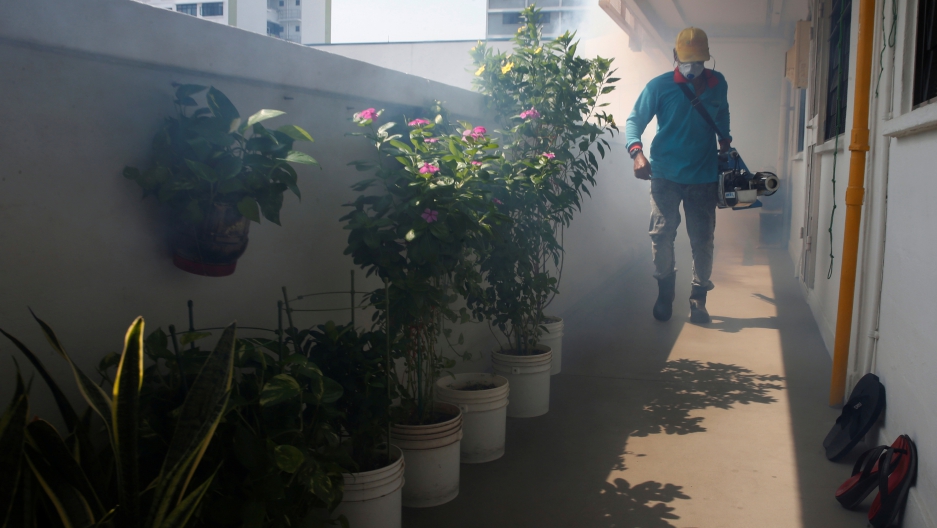 A worker fogs the corridor of a public housing estate in the vicinity where a locally transmitted Zika virus case was discovered, in Singapore August 29, 2016.

Singapore on Monday confirmed more Zika infections, bringing the total number of cases past 50 as mosquito-fighting teams saturated the scene of the outbreak amid growing public alarm.

In a statement, the Ministry of Health and the National Environment Agency said they had found 15 new cases of locally transmitted Zika virus, all in an eastern suburban area known as Aljunied, up from 41 on Sunday.

Most of those affected were foreign workers at a condominium construction project.

Nearly all have recovered, but doctors said more Singaporean women were asking to be tested.

In pregnant women, Zika can cause microcephaly, a deformation in which babies are born with abnormally small brains and heads.

On Monday, inspectors from the environment agency checking for mosquito-breeding sites visited homes in the area, as well as dormitories housing foreign workers.

"It's quite frightening, because I thought Zika is something happening on the other side of the world. But now it's right here in my neighborhood," customer service manager Josephine Kwan, who lives in the affected suburb, told AFP. 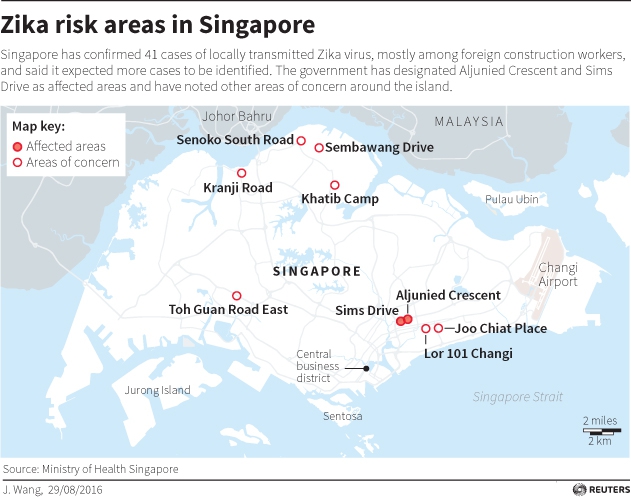 Singapore, despite the highest health care standards in Southeast Asia, is a densely populated tropical island with frequent rain. Mosquitoes breed in stagnant water that collects in construction sites, open space and homes.

It is also one of Asia's cleanest cities, but has a chronic problem with dengue fever, which is spread by the same Aedes mosquito that carries the Zika virus.

Singapore's first reported case of Zika in May involved a man who had visited Sao Paulo in Brazil earlier in the year.

But all of the latest cases involved local transmission.

The Straits Times newspaper quoted local doctor Tan Thai Keng, whose surgery reported four of the latest cases, as saying more women were visiting the clinic as news of the outbreak spread.

They included a pregnant 32-year-old.

"She wanted to find out whether she had the virus in her blood or not. So we took her blood here and sent it to the lab at Tan Tock Seng," he said, referring to the main national hospital for communicable diseases.

Neighboring countries took steps to prevent the spread of the disease fromSingapore.

Taiwan on Monday issued a travel advisory for Singapore, urging travellers to watch out for mosquito bites and cautioning pregnant women and those planning to conceive to postpone trips to all areas with Zika cases.

Malaysia, Indonesia and the Philippines have also said health officers will closely monitor arrivals from Singapore, which was visited by 15 million people in 2015.

In the city-state, inspectors armed with insecticide spray cans on Monday visited high-rise public housing flats to check toilets and other areas for stagnant water.

The environment agency said it had inspected 3,600 premises and found and destroyed 36 mosquito "breeding habitats".

Contractors in protective gear carried out insecticide fogging in public places, pumping a mosquito-killing mist over large areas on the ground.

Of the 41 Zika cases confirmed Sunday by the government, 36 were foreigners working at a condominium construction site.

Work was halted at the site on Saturday after environment agency officers found that housekeeping was "unsatisfactory with potential breeding habitats" for mosquitoes.

The latest global outbreak of the disease began in Brazil in early 2015.