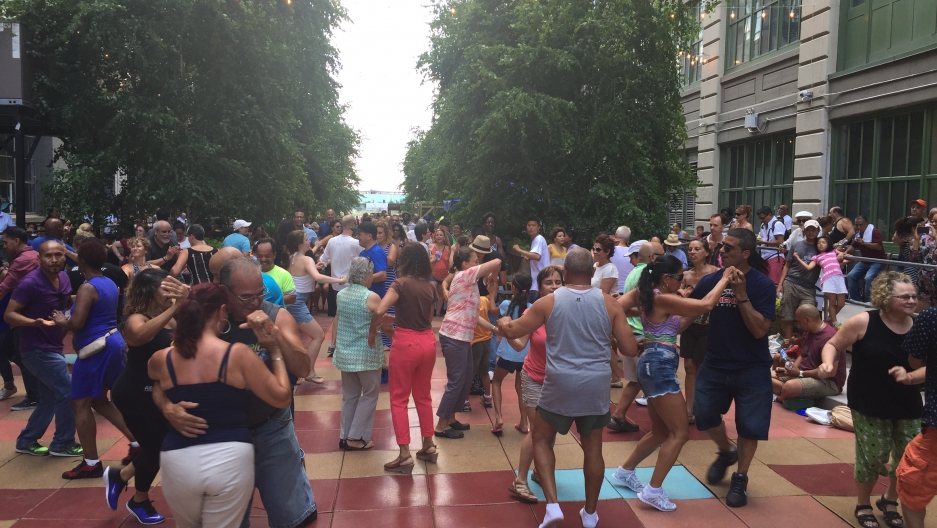 A salsa party hosted by Industry City, a new development on the waterfront in Sunset Park, Brooklyn.

Inside a courtyard, sandwiched between two old factories, men and women twist through the steps of salsa. On the sidelines, couples circle their hips and shoulders in anticipation of the next song. They sip beers and eat Puerto Rican comfort food.

It feels like a throwback, like a good old neighborhood barbecue, but it’s actually something of a community relations event put on by a private company that’s recently moved into the neighborhood.

Outside the gates a dozen or so people are protesting. They wave giant black flags that read "No Displacement."

They’re scared that this event and the development behind it will squeeze them out of their neighborhood.

Martinez has lived in this neighborhood all her life, but she can’t afford her own apartment here. She’s worried what will happen if and when her parents’ rent goes up.

New York is in the midst of an identity crisis. Neighborhoods that were traditionally thought of as solidly immigrant, working class places are changing. Rents have skyrocketed, and people who have long lived in the neighborhood are faced with the question — can they afford to stay?

And this neighborhood, Sunset Park, is right in the middle of this crisis.

Martinez’s grandparents moved to New York City from Puerto Rico. They bought their first house in Sunset Park, and the whole family lived together when she was growing up.

Martinez says her father loves salsa music. Every Sunday when she was a kid, he would put two speakers in the windows, and he would blast his favorite salsa records.

“If you went across the street, you would hear the music blasting,” Martinez remembers. “So like, it was always a part of me. It was just something my parents, they would always dance to.”

Then, three years ago, Jamestown Properties bought 16 massive buildings and started to turn the area into "Industry City" — a place that would be filled with small-scale manufacturing, tech and media jobs.

Recently, when Industry City threw this salsa party, it hit a nerve with Martinez and others in the community. They say the whole event felt like a ploy.

“They take pictures when they do these events,” explains June Allende, who grew in the neighborhood, “[They say] ‘Hey look, we are for the community. We have people of color at our events.'”

The development company says this isn’t true. Cristal Rivera is the director of community engagement at Industry City. She’s also Puerto Rican, and she’s kind of exasperated by these allegations. She says the salsa parties are not a ploy to trick the community; they are a response to community demands.

“And I think that that’s our job really as a property that’s in a place that has a diverse community, to be responsive to what people would like to see happening here,” Rivera says.

After work one day, I meet up with Antoinette Martinez again, and we walk through the park that gives the neighborhood it’s name.

Martinez points to a sloping hill, where young guys are playing soccer. She's been coming to this park since she was little. “When, the Macy’s fireworks [happen], everybody crowds around here.”

Sunset Park is an iconic immigrant neighborhood. It’s a quarter Asian and almost 50 percent Latino — the majority are originally from Puerto Rico. Plus, it has a perfect view of the Statue of Liberty.

“So if we keep walking up, you will see a beautiful view of the waterfront,” Martinez points to the harbor and skyscrapers in the distance. “And that’s what all these companies and Industry City are really going after.”

The neighborhood’s waterfront used to be a manufacturing center — shipping and lots of garment factories — and most of the neighborhood used to work here. But you know the story: American manufacturing jobs moved overseas and factory buildings were abandoned.

Now, Industry City is trying to bring life and work back to the waterfront. They’ve started a work-force training program and small business incubator. The plan is that in 10 years, Industry City will employ 20,000 people. But the development is also pushing up real estate prices at a time when real estate values in New York are exploding anyway. Apartments in Sunset Park are twice as expensive as they were five years. Right now, Rivera says, Industry City employs 4,500 people — half of them are from the neighborhood.

So adults like Martinez still live with their parents. Some 20 percent of houses in Sunset Park are considered overcrowded, meaning some families sleep two or three people to a room.

Columbia University sociologist Van Tran says Sunset Park is a snapshot of a country-wide feeling of financial unease and dislocation.

“I think what you are seeing in Sunset Park is that our traditional idea of the American Dream of upward social mobility, of hard work leading to success, of owning a home that you could afford is increasingly unobtainable to the new generations of immigrants who have arrived,” Tran explains. “But also to the children of the older generation of Puerto Ricans that have lived here for the last 35 years.”

Tran stresses there are good things that come with gentrification, like decreased crime and better city services. But, he cautions, communities like Sunset Park will need help to stay in their homes.

Tran says cities have to build more affordable housing. In addition, he says, lawmakers should think about creating rent-control policies for local businesses so that families and mom-and-pop stores aren’t priced out.

Martinez has finally decided she’ll have to leave Sunset Park if she wants a place of her own. Now, she’s looking about an hour and a half away in the Bronx.

As for her parents, Martinez says, they’ve rented in Sunset Park for more than a decade. So, if the rent goes up or their building gets sold, they’re thinking of moving back in with family in Puerto Rico.

“Because then, if they live out there, they don’t have to worry about paying rent or anything, because they own the house,” she explains.

Martinez says the pace of the neighborhood’s transformation is sometimes staggering. Some blocks don’t look at all like her home.

But from the highest point in the park the view hasn’t changed: the Statue of Liberty and the tip of Manhattan. 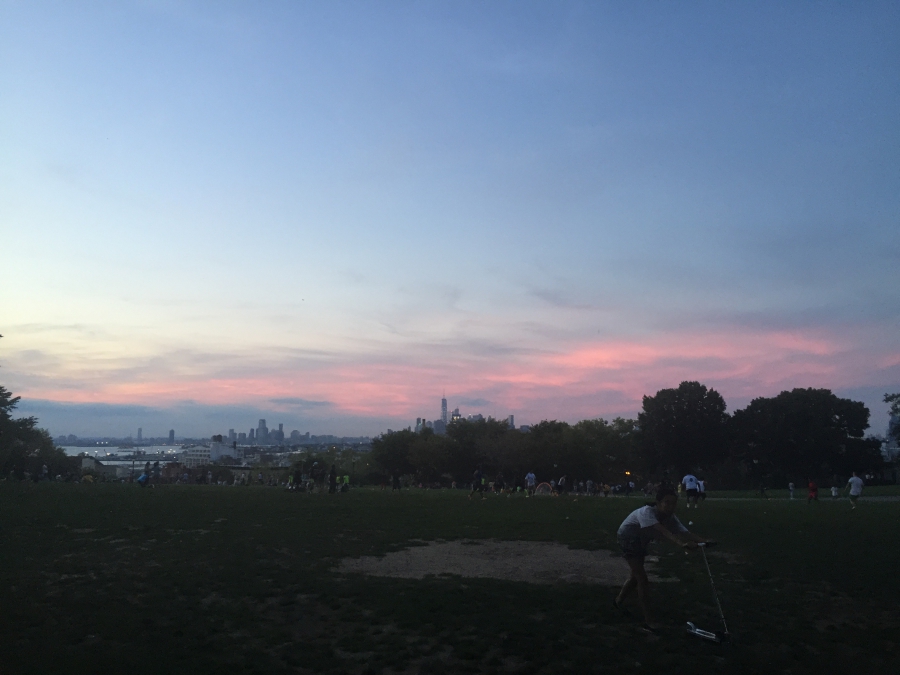