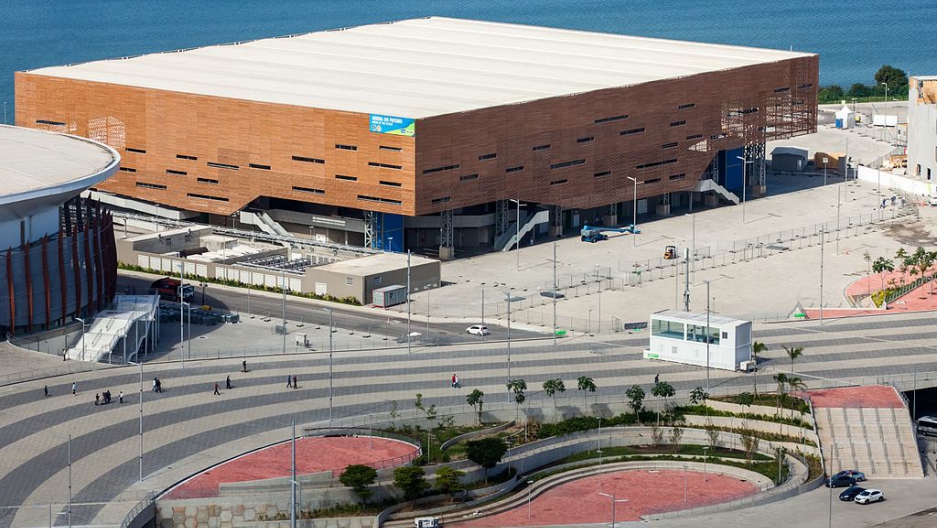 Now that the 2016 Olympic Games are complete, this stadium will be dismantled and its components used to build four new schools.

Reduce, reuse, and recycle aren’t the first words you think of upon seeing the shiny, just-finished stadiums that form the backdrop for each Olympic Games. But after the crowds have gone, every host city is left to face the problem of its vast, emptied Olympic complexes.

Sam Lubell, a contributing writer for Wired and co-author of the forthcoming book “Never Built New York,” says that to reverse the trend of “white elephant” Olympic structures, the International Olympic Committee is encouraging host cities to think creatively about the next incarnations of their arenas and stadiums.

“Certainly Athens and Beijing are two of the poster children for empty Olympic parks,” Lubell says. “Rio is really focusing on a few stadiums that are not going to be that way at all.”

In Rio de Janeiro, where billions of dollars have been spent on new Olympic infrastructure, including $38 million on a 20,000-seat aquatic stadium, organizers have planned second lives — and even second locations — for many of the buildings.

“They’re calling them ‘nomadic stadiums,’” Lubell says. “The idea is once you’re done with the games, you don’t just take the stadium apart and it’s done.”

Instead, organizers of the Rio Games will take the stadiums apart and use their components elsewhere, in some cases to serve entirely new purposes. The handball arena is slated to become four new city schools. That 20,000-seat aquatic stadium will be reborn as two community pools.

Looking beyond the Rio Games, similar (and even leaner) architectural recycling strategies are cropping up in plans for future Olympics. Last year Tokyo, which will host the 2020 Summer Olympics, scrapped Zaha Hadid’s design for a monumental helmet-shaped stadium in favor of a meeker option by Kengo Kuma. In addition to being much cheaper than Hadid’s plan, it’s hoped that Kuma’s new stadium design will blend in better with its surroundings. And Los Angeles, in its bid to host the 2024 Summer Olympics, is proposing mainly to retrofit and expand existing sports venues like the Coliseum, rather than build new ones.

And while Lubell says that such cost-saving and reuse plans aren’t required by the International Olympic Committee, they clearly improve a city’s bid — and can be evergreen public relations moves. Case in point? London, which hosted the 2012 Summer Games.

“London still is getting, for the most part, really good reviews for the way they handled the games,” Lubell says.

Lubell adds that not only did London repurpose, downsize, or deconstruct many of its stadiums after 2012, but the city also sited its arenas for maximum impact in the first place.

“London really used the Olympic Games to redevelop an area of theirs, which is the east side of London, that was historically underserved and... not in the best shape,” Lubell says. “That’s a plan that now is almost considered something mandatory.”

So the next time you scan Rio de Janeiro’s skyline for a visually arresting bird’s nest- or helmet-shaped stadium, look again. You may have to search until you see four schools, or two swimming pools, or a park.

“Architecture and urban design are becoming more and more of an enticement for the Olympics,” Lubell says. “And you know, look at the proposals — they’re getting so elaborate. They’re spending millions and millions of dollars on these renderings, and soon I’m sure it’s going to be a virtual reality fly-through, and you’re going to be able to see what the Games are like. And it’s a huge part of getting the games.”