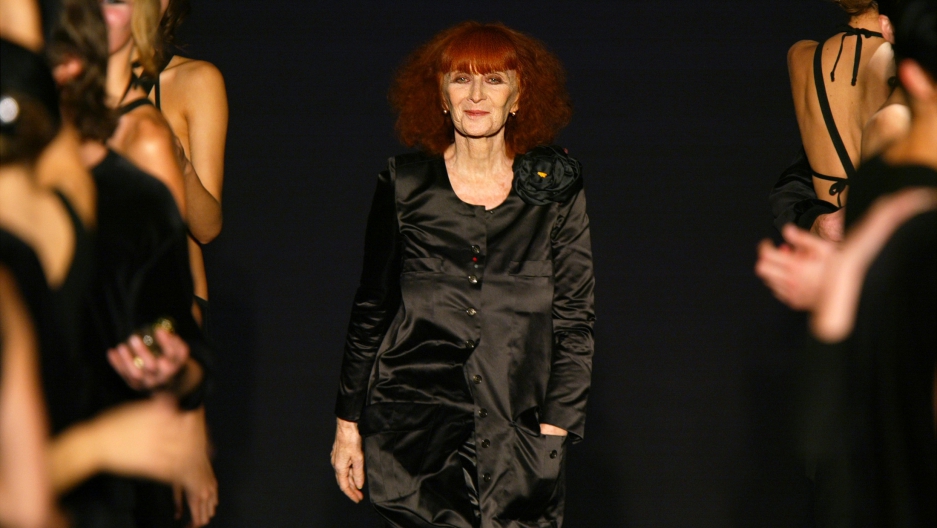 Models applaud French designer Sonia Rykiel at the end of her women's fashion show in Paris, France, October 9, 2003. Rykiel, known for her brightly coloured striped outfits, has died at the age of 86.

Sonia Rykiel, the influential French designer who helped shape the contemporary woman's wardrobe, died Thursday at the age of 86 after a long battle with Parkinson's disease.

The pioneering Rykiel was a fixture in the industry for half a century, launching her own fashion house in 1968 buoyed by the Swinging Sixties craze in London and the emerging feminist movement across the globe.

"She invented not just a style but an attitude, a way of living and being, and offered a freedom of movement," French President Francois Hollande said in a tribute.

The late Yves Saint-Laurent's partner and co-founder of the label, Pierre Berge, lauded her as a self-made woman who "started with nothing to become one of the most important women in fashion".

Known as the "Queen of Knitwear", Rykiel made her breakthrough in 1962 with the so-called Poor Boy Sweater, a shorter, skinny sweater for women with long sleeves.

The "Poor Boy" met resistance at first partly because of its bulky stitches.

But all that changed in December 1963 when Elle magazine featured 19-year-old French pop idol Francoise Hardy on its front cover in a skimpy striped red-and-pink Rykiel number.

It became a sensation. Brigitte Bardot and fellow singer Sylvie Vartan were photographed in Rykiel sweaters and Andrey Hepburn herself went to the shop and snapped up five.

"She typified a new generation of designers who launched their own labels outside the established system of haute couture," her official website said.

Over the decades she branched out but always remained true to knitwear, using humble jerseys and cottons with fluid, innovative shapes.

She blurred the divide between day and evening wear, and always favoured pants over skirts.

Rykiel was born Sonia Flis in the upmarket Paris suburb of Neuilly on May 25, 1930 — the eldest of five daughters to a Romanian watchmaker father and a Russian mother.

She started out her career as a window dresser in a Parisian textile store at the age of 17, but had no formal training. In 1954, she married a clothing boutique owner, Sam Rykiel, with whom she had two children and whom she later divorced.

She first publicly revealed she was suffering Parkinson's in a 2012 book.

Within the French fashion industry, Rykiel will be remembered as a visionary who helped cement Paris and, in particular, the Left Bank, as the capital of couture.  She described her philosophy as "la Demode," a contraction of "deconstruction" and "mode."

In 2008, 30 of the world's top designers paid tribute to the flame-haired knitwear queen at an exhibition marking her 40 years in the business, offering their own take on the Sonia Rykiel look.

"She abolished hemlines and linings, she invented knitwear, she made clothes that were reversible, she used layering," Olivier Saillard, who curated the retrospective of her work, said at the time.

Jean Paul Gaultier, another lover of stripes, paid tribute to her "revolutionary" work for women, saying "Thank you for the inspiration and style."

Rykiel played herself in Robert Altman's 1994 satire "Pret-a-Porter" which was filmed during Paris fashion week, and wrote several books. Her daughter Nathalie remains a consultant for the label, which since 2012 has been in the hands of a Chinese firm.