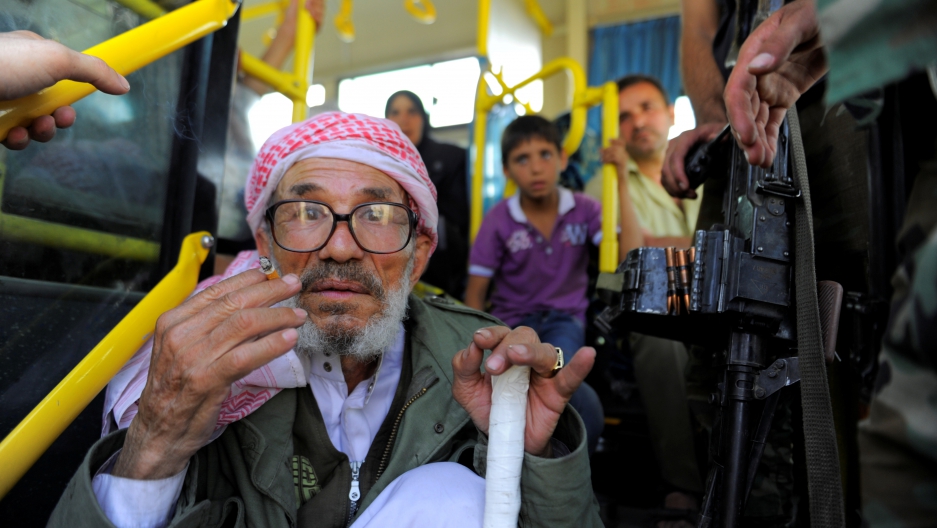 Survivors of the siege of Daraya being evacuated after rebels surrendered the Syrian town to government forces.

On their last day in their homes, residents visited the graves of friends and family one last time.

The suburb of Daraya, on the outskirts of Syria’s capital Damascus, held out against a four-year-long siege and bombardment by forces loyal to the Syrian government. Until now.

Many residents posted photos of themselves by the gravesite, not knowing when they would return.

On Thursday, Syria’s armed opposition and the government reached an agreement to allow the suburb’s residents to be evacuated to government shelters and rebel fighters transferred to Idlib, in an opposition-held city in northern Syria.

"Seven hundred armed men with their personal weapons will leave Daraya to head to the city of Idlib, while thousands of men and women with their families will be taken to reception centers," the Syrian state news agency said.

Following the evacuation, the Syrian army will enter the town.

By midday Friday, buses, accompanied by Syrian Red Crescent ambulances, began evacuating residents. Hussam Ayash, a member of a civil activist group in the town, struggled to come to terms with what was happening.

“I can’t find the words to describe my feelings today. I’ve never felt anything like this. I’ve lost a lot of friends and cousins, but nothing like this,” he said by phone from Daraya.

“I am now forced to leave my city, my home. It’s more than a place. It’s something that is part of you.”

The deal, which amounted to a rebel surrender, follows years of heavy bombing by the government of Syrian President Bashar al-Assad, and later his Russian allies — a campaign that has taken countless civilians’ lives and left the suburb resembling a moonscape.

As one of the country’s first towns to hold peaceful protests against Assad’s government in 2011, Daraya — which is less than five miles southwest of the center of Damascus — became a symbol of the Syrian revolution’s original aims. It later symbolized the government’s brutal response.

Assad’s government responded to protests with a vicious crackdown by the army, transforming a peaceful revolution into a violent uprising.

Unlike other parts of the country, Daraya did not fall under the sway of extremist groups like ISIS or affiliates of al-Qaeda. The town was unique also in that it was administered not by fighters, but by a civilian council. But that did not prevent a merciless campaign to force it into submission.

For four years, no humanitarian aid was allowed into the town, despite repeated requests from the United Nations and reports of malnutrition and hunger. The only aid convoy permitted in since 2012 entered in June. A ferocious bombardment by the Syrian government followed.

The town has been virtually flattened by all manner of aerial weapons. Local activists regularly post videos of barrel bombs dropping from government planes. Just last week, activists posted pictures of what they claimed was the aftermath of a government attack that destroyed Daraya’s last remaining hospital with a “napalm-like” substance.

“Nobody could understand how we lived here,” said Ayash. “Shelling, bombing, lack of food, lack of medication, no electricity, no communications. You are in a large prison.”

Despite the horrific conditions in the town, the residents who stayed behind chose to remain in their home rather than risk arrest, or worse, from the Assad government.

#Daraya then and now pic.twitter.com/p8oH3hZcLw

The surrender of Daraya comes at a time when Assad shows no signs of letting up efforts to recapture all rebel-held areas across the country.

Syria’s fractured armed opposition has gradually lost ground to the government, which has the backing of Russia, Iran and the Lebanese Shiite group Hezbollah.

Meanwhile, in Geneva, US Secretary of State John Kerry met his Russian counterpart Sergei Lavrov in an attempt to reach a deal on fighting ISIS. The situation in Daraya, is likely not high on the agenda.

Ayash will leave for Idlib on Saturday, with other activists and rebel fighters. Like many people fleeing Daraya, he hasn’t figured out what comes after that.

“Believe me when I say, if you leave any one of us alone for two minutes, we will start crying. I cry, but it’s no relief.”

“Daraya was the cradle of the peaceful resistance years before the revolution even began.”

She added: “Daraya fought the regime with roses & water. They were left alone to fight the tanks & siege. Its people are too good for this ugly world.”