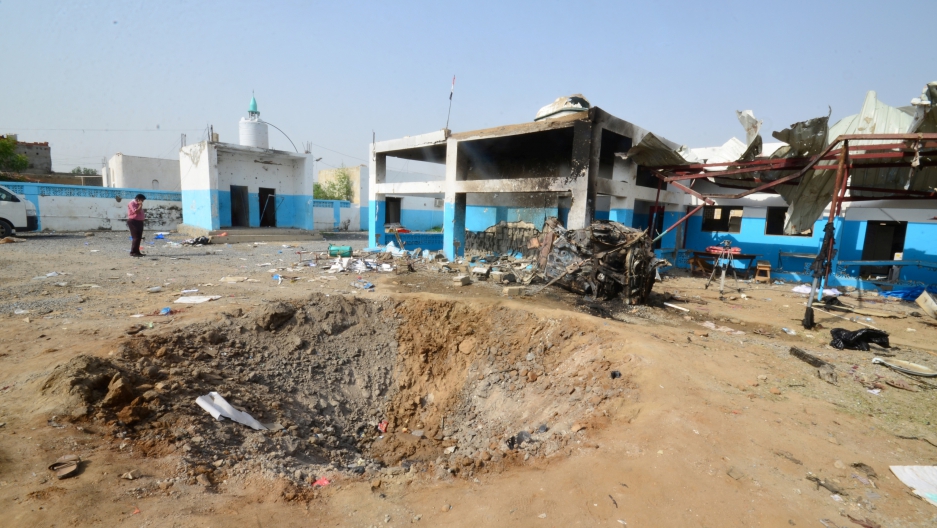 A crater caused by a Saudi-led coalition air strike is seen at the yard of a hospital operated by Medecins Sans Frontieres in the Abs district of Hajja province, Yemen.

The United States has withdrawn most of its advisors that have been helping Saudi Arabia coordinate a bombing campaign for 17 months in Yemen.

Reuters reports that the US withdrew most of its Joint Combined Planning Cell from Saudi Arabia in June. The JCPC coordinates midair refueling of Saudi Coalition fighter jets and limited intelligence-sharing. Many people in Yemen have been critical of America’s support for the Saudi side of a war that has killed nearly 4,000 civilians, according to UN estimates.

A senior Obama Administration official explained by email that US support for the Saudi war effort in Yemen is not without limits.

“During an earlier phase of the conflict, US military personnel offered advice to the Saudi-led Coalition, focusing on measures to prevent civilian casualties,” the official wrote. “This Joint Combined Planning Cell was largely shelved following the cessation of hostilities.”

The cessation, which began in June ahead of peace negotiations in Kuwait City, ended when talks broke down on August 6th. Since then, air strikes on residential homes, a marketplace, a school and a hospital have renewed concerns that pilots in the Saudi-led Coalition are deliberately targeting civilians.

“The cooperation that we've extended to Saudi Arabia since the conflict escalated again is modest and it is not a blank check,” Pentagon spokesman Adam Stump said. Reuters reports that the 45-member JCPC is now down to a staff of fewer than five.

The Pentagon statement spells out the limits of US involvement in the bombing campaign, which began in March 2015. “At no point did US military personnel provide direct or implicit approval of target selection or prosecution," Stump said.

This places the blame squarely on the Saudi-led Coalition for dozens of unlawful airstrikes in civilian areas documented by Human Rights Watch and Amnesty International.

But many in Yemen hold the United States equally responsible.

“In this war hundreds of bridges, schools, hospitals, colleges, factories, markets, water projects, telecom stations, power stations, food storage facilities, civilian homes all over the country — even post offices have been bombed and targeted,” said Edrees Alshami, an oil company employee living in the Yemeni capital, Sanaa. Alshami studied at Louisiana State University and worked in the US oil industry before returning to Yemen to be near his aging parents.

“Having lived in the States and got to know the American people, I really feel betrayed,” he said. “The American people I know are kind, compassionate — and just good people. I'm sure they wouldn't approve of these atrocities and war crimes being committed in their name, and to support the Saudis, the so-called allies.”

Protesters at a massive rally in Sanaa on Saturday looked up to see fighter jets from the Saudi-led Coalition overhead. Witnesses reported air strikes in the vicinity of the rally. Yemeni Twitter was active with anti-Saudi — and anti-American — sentiment.

One #Yemen
One voice
One flag
One place
One enemy [#USA and #Saudi_Arabia]
in the bulkiest rally in the world today. https://t.co/WWVdIHFbf7

Many Yemenis are fighting the Houthis in different parts of Yemen. Local militias plus supporters of the exiled Yemeni president Abdrabbuh Mansour Hadi, along with military provided by Saudi Arabia and the United Arab Emirates, are battling the Houthi forces. In some cases fighters from ISIS and the Yemeni branch of al-Qaeda have also joined the fight against the Houthis.

”A lot of Yemenis take the time to explain to me there are two wars going on, or more,” Jamila Hanan wrote via messaging on Twitter. Hanan monitors the humanitarian crisis in Yemen from her home in the UK. Her Twitter network includes people in every part of Yemen. “[There is] the external [war] with Saudi Arabia, and also the internal one(s) between Yemenis."

Hanan, who does not take sides in Yemen’s internal conflicts, nonetheless agrees that Western support for the Saudi-led Coalition has only made life worse for many in Yemen. "We might not be able to stop the internal war(s)," she writes. "But we could stop the external one which they could really do without right now."