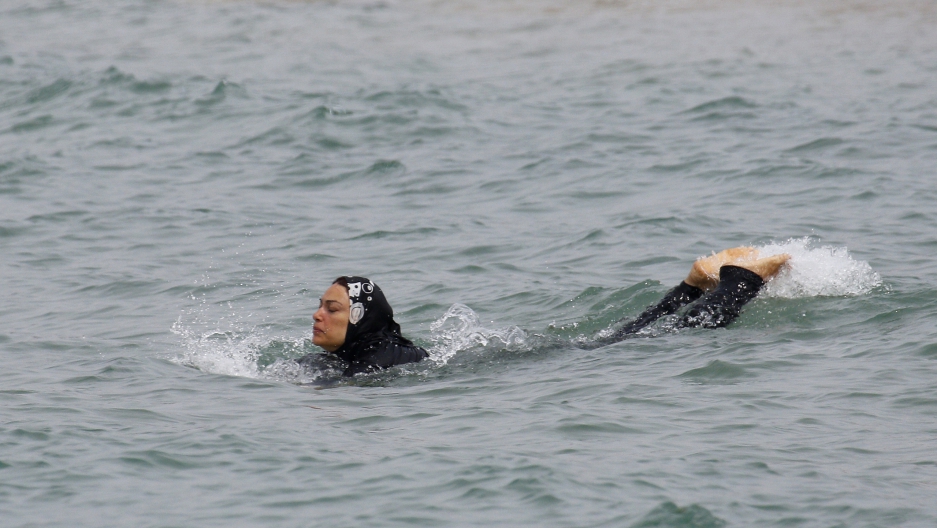 A Muslim woman wears a burkini, a swimsuit that leaves only the face, hands and feet exposed, as she swims in the Mediterranean Sea in Marseille, France.

In the past few weeks, multiple towns in France have issued bans on the full-body swimsuit known as the "burkini."

Designed for Muslim women, the burkini covers everything but the face, hands and feet.

At least 15 towns and cities in France have banned the swimwear, according to AFP. Nice is the most recent to join in.

French Prime Minister Manual Valls backed the bans on burkinis earlier this week, saying the style is "not compatible with the values of the French Republic." He stopped short of supporing a nationwide ban.

The moves have stirred up a lot of debate.

Inna Shevchenko, the leader of the Paris-based activist group FEMEN — which is known for protesting topless — said her group doesn't like the burkini or any religious attire for women.

“Those clothes are used as a political flag of a conservative political idea.”

Shevchenko says dress codes promoted by religious institutions "mark women in society" as inferior to men, valued most for their modesty.

But Shevchenko also opposes banning the burkini because doing so is, in her words, policing morality.

“I would say this is a French version of morality police,” Shevchenko said. “This is a huge failure of [the] French government and French authorities.”

But Margari Hill, a Muslim and the co-founder of the US-based Muslim Anti-Racism Collaborative, says the notion that Islamic attire is a political statement or a symbol of fundamentalist ideas is completely wrong.

Hill wears a burkini when she goes swimming in Southern California. She says her religious dress “is about my relationship with my creator.”

Hill converted to Islam when she was 18.

“When I started practicing Islam, it really liberated me from just simply focusing on... my physical self and how men and women perceive me."