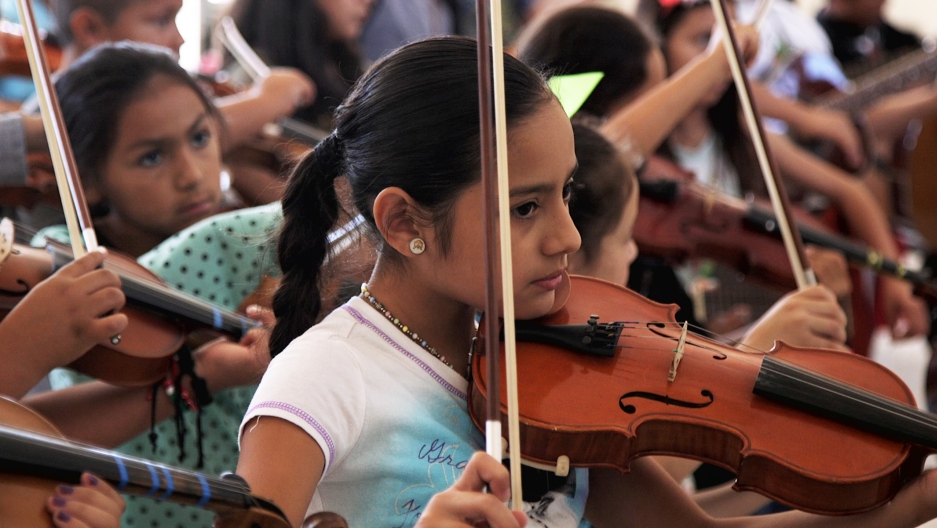 Thirteen-year-old Jose Ramon Gonzalez Chavez usually spends summers lying on his bed at home or on his cellphone.

But this year, he’s at Cook Middle School in Santa Rosa learning how to strum the guitarrón — the big bass guitar that’s a trademark of mariachi music.

“The guitarrón is what holds the song in place,” Chavez says as he clutches the instrument. “It’s the bass. You play two strings or one string at a time. And that’s the bom-bom-bom.”

Chavez is one of 50 kids attending California’s only Mariachi Summer Camp for beginners.

Many of them come from Mexican families and have heard mariachi music at parties and gatherings, but never picked up an instrument. Their parents can’t afford it or their schools just don’t teach music.

At camp, the students — who range in age from 9 to 15 — receive three weeks of intense instruction and learn how to play five traditional ballads. It all culminates with a community performance.

Jose Soto, a Sonoma State University student and mariachi musician, created the camp two years ago with the help of the Luther Burbank Center for the Arts in Santa Rosa.

Soto wanted to offer a program where money didn’t matter.

“[The students] don’t have to pay anything,” Soto says. “They don’t have to have an instrument. They get to choose what they want to play.”

All the instruments — the guitars, violins and trumpets — are on loan through the center’s Instrument Lending Library. Soto also enlisted the help of several other musicians to teach the kids in small groups.

“I want them to explore the world and explore what’s in the music," Soto says. "I tell them, ‘Try one instrument, if you don’t like it, just try another one. See if you can fit it into your life.’ ”

Soto is from Guadalajara, which is home to some of the finest mariachi bands in Mexico. His father was a mariachi and even formed a family band featuring Soto and his brothers and sisters.

But when the family came to the United States eight years ago, Soto couldn’t find a program to help hone his talent. Instead, he learned how to play the trumpet in a high school band, and practiced mariachi music on his own.

He hopes his camp will give kids the skills and the confidence to perform and share this music with others.

A New Generation of Mariachi Enthusiasts

Nine-year-old Yuritzi Guerrero is one of the many girls at camp who is learning to play the violin.

She’s also a talented vocalist, but typically sings in the shower or when her mom turns on the radio.

Now she is harmonizing with other girls in Spanish.

“The songs are just so pretty and they express feelings,” Guerrero says, wearing a ponytail with large bow on top. “When there’s more voices, it sounds beautiful that way.” 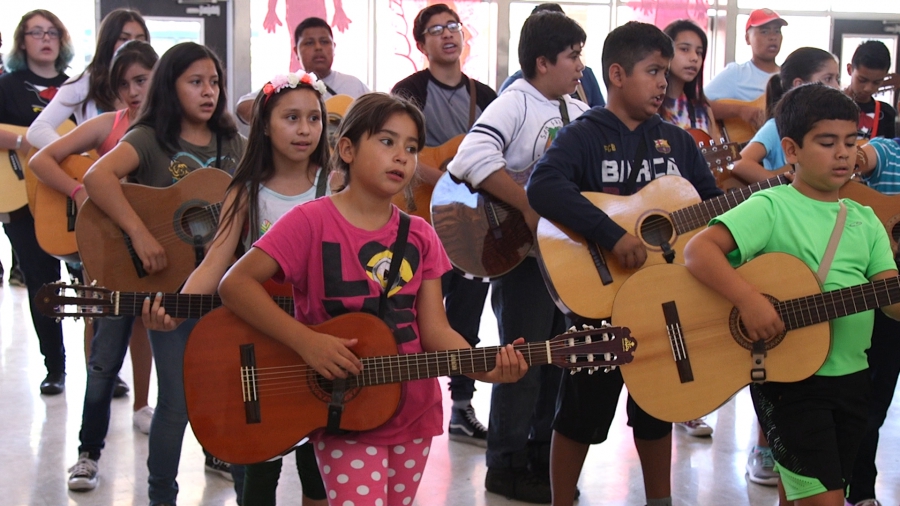 Throughout camp, Soto reminds the kids this music emerged from the ranches and small towns of Mexico’s colonial past and symbolizes Mexico’s cultural identity.

Before the kids even pick up any instruments, they learn to find their voice so they can express happiness, sadness and joy.

One of the classics they’re practicing is “De Colores,” a children’s folk song about giving thanks for the all the colors in the world.

Many of the students say they’re happy to a have a better understanding of their families’ homeland. But for 13-year-old Rebecca Humphreys, the culture and the music are new.

Humphreys is the only student at camp with no ties to Mexico. She wanted to learn the trumpet but quickly realized it was “too hard to get sounds out of it.”

So the middle school student switched to guitar and enjoys how this music tells stories and how all the instruments come together.

“Compared to some other music, it has a lot of soul and spirit in it,” Humphreys says. “The strumming patterns on mariachi guitars are also very different. Mariachis strum very fast.”

After practicing all day in separate instrumental groups, Soto finally brings the students together to rehearse for the upcoming performance.

But first, the kids try on their mariachi suits, which have been donated by local bands.

“It’s tight,” says Chavez, who is donning a maroon suit with gold stitching and chains. “Actually, it’s really snug and cozy. I feel like I could wear this all day.”

Soto gets the roughly 50 students into their positions and gives them his cue to begin one of the musical pieces.

A melodic burst of music fills the small school auditorium and Soto beams with pride as he conducts the students. It’s not perfect, he says, but it’s progress. 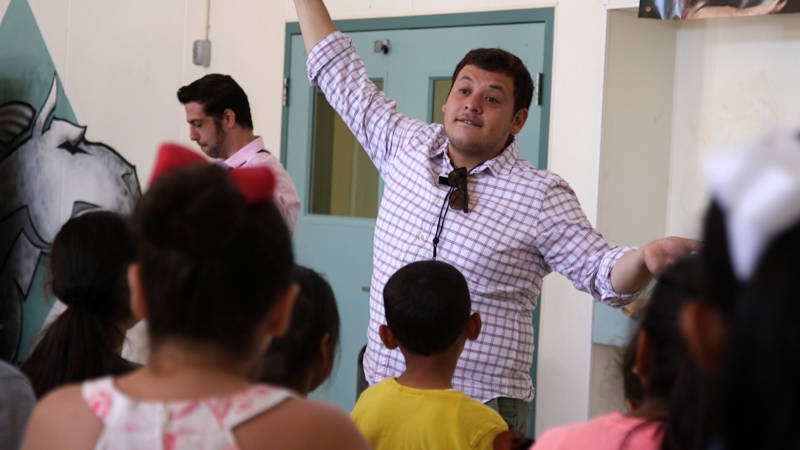 The kids stare back at him, focused, concentrating on the music. They say the past three weeks have been hard, but feel like it’s finally beginning to pay off. In fact, most of the kids say they plan to be back next summer.

Demand for the camp was almost instantaneous after it was first offered last year.

The Luther Burbank Center for the Arts responded this summer by expanding the program to Washington Middle School in Cloverdale. Another 50 students have signed up at that location.

Soto says he’s excited to share his love and appreciation for this music with a new generation.

“I don’t know what I like most — being a mariachi or seeing my community come together like this. Maybe it’s a little of both because I feel happy with what I’m doing.”

This story originally appeared on KQED.org as part of The California Report.