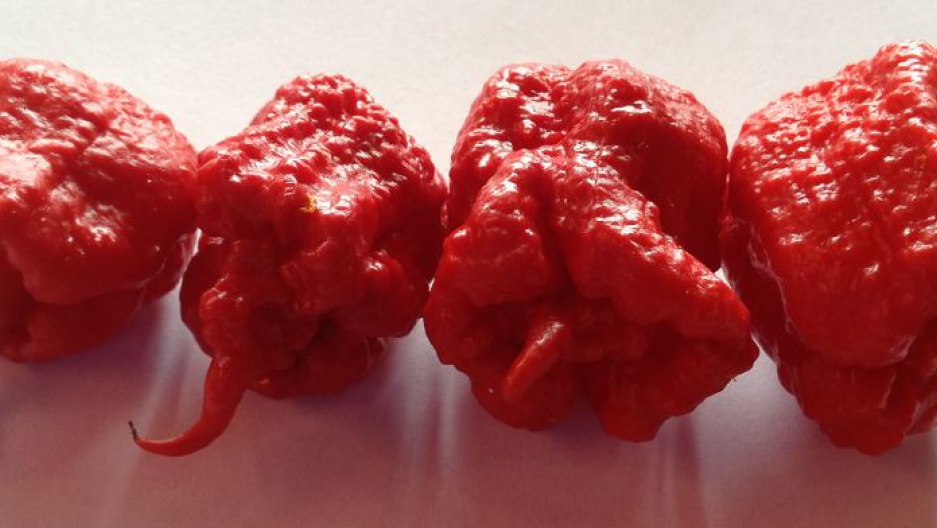 Ed Currie named these peppers “Carolina Reapers” for the sickle-like tails that stick out the ends.

The first time Ed Currie tasted the Carolina Reaper, a fire-engine red chili pepper the size of a golf ball, “it knocked me to my knees,” he says. “I was very surprised.”

Currie, who’s the founder of the PuckerButt Pepper Company and cultivator of the Carolina Reaper, says he wasn’t trying to create the hottest pepper in the world. His initial aim was to produce a pepper packed with capsaicinoids, a family of compounds that has been used in pharmaceuticals such as arthritis creams. Currie had heard they might be useful in treating cancer or heart disease (any solid proof of this remains elusive, though Currie is optimistic).

But capsaicinoids are also what make chili peppers hot. Of those compounds, capsaicin is the most common.

Cliff Calloway, a chemistry professor at Winthrop University in South Carolina, says the capsaicin molecule looks like a key, with a round end and a tail coming out of it, and acts like one, too. “It kind of fits into these little nerve cells in your tongue,” he explains, and when that happens, you perceive the sensation of heat. “So even though it’s not really a chemical burn, like getting burned by a match or a flame or anything like that, your nerve cells get the signal from the capsaicin ‘key’ to make them think that they’re getting burned,” says Calloway.

By packing his Carolina Reaper with capsaicinoids, Currie inadvertently concocted a very, very hot pepper. “When you bite into it, the initial taste is sweet. You go, wow, that wasn’t so bad. And then immediately, that vast amount of capsaicin takes over, and it’s kind of like eating molten lava. That’s the best way to put it,” Currie says.

The heat is so bad, it feels good — Currie says Reaper consumers sometimes experience something like a runner’s high. And the cooldown can take a little while — expect about half an hour before the heat sensation dissipates. (Currie, by the way, recommends citric acid — like lemon juice — to help ice the fire.)

Currie first cultivated the Carolina Reaper in 2004, crossing a Naga pepper from Pakistan with an habanero pepper from the island of St. Vincent. Then he worked with Calloway and his students at Winthrop to test and analyze the pepper’s heat value. They used a high-performance liquid chromatography system, a chemical process that can separate the capsaicinoid compounds from other substances in the pepper.

The system is also equipped with a detector that measures the amount of UV light absorbed by each capsaicinoid. The more of a capsaicinoid there is, the more light that gets absorbed, and the greater the signal from the detector.

Based on the strength of those signals, chemists can determine the concentration of each capsaicinoid, and from there, calculate the pepper’s Scoville value — that is, its heat level.

The Scoville scale was developed by pharmacist Wilbur Scoville more than 100 years ago as a quantitative measurement for how hot chili peppers were.

By the 1970s, analytical chemists modified the technique to make it less subjective and more standardized. They used gas [and later, liquid] chromatography to separate the capsaicinoids, and a set of pungency values that related capsaicinoid concentration to Scoville’s original dilution factor.

After years of testing, through various seasons and analyses of different plots and varieties, Calloway and his team concluded that the Carolina Reaper averaged a Scoville value of 1.569 million, though it could go as high as 2.2 million.

In 2013, the Guinness Book of World Records designated the Carolina Reaper as the hottest pepper in the world. And it seems to be getting hotter with each passing season, according to Currie, but he and his research colleagues don’t quite know why.

Currie says he’s not so interested in defending the hottest pepper title — he’s more keen to contribute his pepper work to medical research, if possible. But, he adds, “honestly, we have all the data ready for the next one. So if someone tries to beat me, I can knock them out.”

This story was first published by PRI's Science Friday with Ira Flatow.