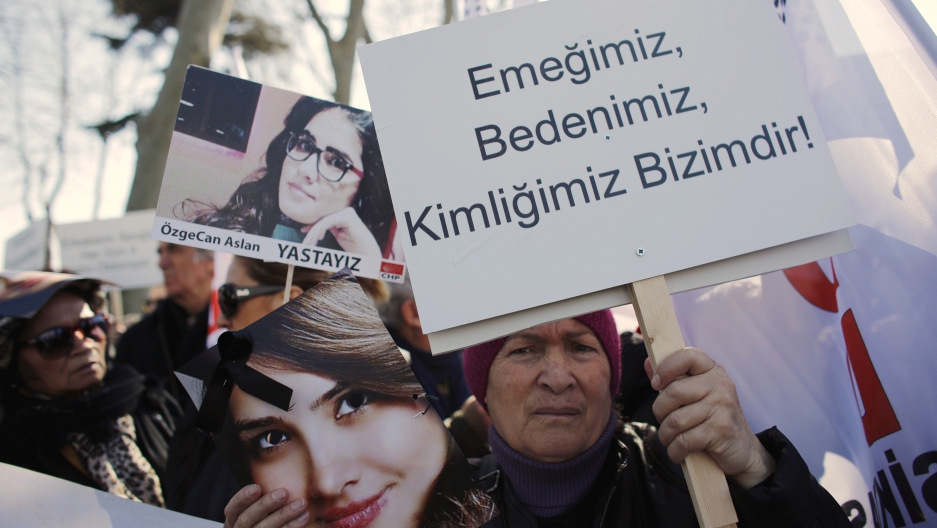 A woman holds a picture of Ozgecan Aslan during a protest against domestic violence in Istanbul on Feb. 21, 2015. The brutal, and public, attack on 20-year-old Aslan last year became a rallying point, prompting protests and condemnation by politicians. The sign reads: "Our labor, our body and our identity are ours."

Like teenagers anywhere, 17-year-old Amine Demirtas had a cellphone and loved to chat and message with friends.

But when her family found out, her brother brutally killed her.

Women activists across Turkey are furious by the latest incident of violence against women. Earlier this month, police charged Demirtas’ brother, 29-year-old Kasim Demirtas, with torturing his sister and electrocuting her to death in their home. She provoked his rage, he told police.

“My sister was meeting random people. I had my suspicions about her using a mobile. I asked her to give that phone to me many times but she didn’t,” he told police. “I asked for the passcode to read her messages. I got so angry when she refused and I killed her.”

The siblings’ father, identified only as M.D., was also arrested for encouraging torture. The mother and aunt-in-law were released. A younger brother identified as C.D., who witnessed the torture, testified that his brother told him he will kill his sister for using a mobile phone without their knowledge.

“Kasim said he got a Facebook message saying, ‘Look after your sister, she may cause you trouble.’ Then he asked me if Amine had a cellphone. I said I didn’t see her using a phone. ‘How come you didn’t see? She has a phone and I’ll kill her,’ he said. My sister had run away from home a couple of times before and the last time she didn’t want to come back again. My father found out where she was and he brought her back.”

“I cannot fall asleep until I beat Amine,” C.D. told police his brother had said.

Nearly 300 women are killed in domestic violence each year in Turkey, however, activists suspect there are additionally a number of “honor killings” that go unreported or disguised as suicides. Honor killing is one in which a relative kills a woman in the family following an accusation that she has done something shameful. The murder restores the family’s “honor” in the eyes of the public.

Honor killings happen across the Middle East and Africa, and are known to occur with frequency in the conservative, impoverished Kurdish regions of Turkey along the border with Iran and Syria. They are illegal under Turkish law — but police and government officials are known to look the other way, and judges often give light sentences.

In response, female activists in Turkey try to track the killings and launch public awareness campaigns that include posters, social media hashtags and publicity stunts. In 2014, the hashtag honoring the Turkish student Ozgecan Aslan, who was brutally murdered while riding a bus home from university, was used more than 3 million times.

Women’s rights activists in Demirtas’ home city of Batman hung posters of Demirtas in the streets reading “I’m Amine Demirtas. I was tortured to death by my family. Don’t let people forget me.”

Seven other women have been killed in the last six months, according to a statement issued by the Women Assembly of Batman Municipality.

The murder is striking a chord in part due to the innocence of the supposed crime — a teenager using a cellphone — as well as the complicity of the girl’s mother, who told police she only warned her son and husband “not to beat Amine so hard.” Furthermore, the use of Facebook by friends of the older brother as a way to monitor the girl’s behavior is frightening many.

In his testimony, 14-year-old brother C.D. said that his brother asked him and his mother to leave the room where he was about to start torturing his sister. “You go out, I’ll beat her,” Kasim Demirtas said.

According to the testimony, when the father saw his daughter’s cellphone, he also got mad.

“Why did you lie to me about having a phone?” the father said.

C.D.’s testimony continued: “My brother got a cable from the kitchen. He electrocuted Amine by this cable. She immediately fainted.”

Kasim Demirtas asked him to bring water from his younger brother. He then poured it all over Amine’s face to bring her back to consciousness. However, she was already dead.

The city of Batman, a battleground of PKK Kurdish rebels and Turkish Hezbollah in the 1990s, faced high rates of female suicides in the past. Between 1995 and 2006, at least 71 women committed suicide. According to official reports, women who have attempted or committed suicide often felt oppressed by male-dominated communities and their families.

“Batman is a very conservative city,” says Emine Seker, chair of the Batman Bar Association’s Commission on Women. “Conservatism is higher in poor families and Amine’s family is one of them.”

In recent years, Turkey has made remarkable legal advances to prevent violence against women. Turkey became the first signatory to the Council of Europe’s Convention on Combating Violence Against Women and Domestic Violence, known as the Istanbul Convention.

Yet the problem of femicide can’t be stopped by law alone, activists say, due to inadequate protection mechanisms and implementation. At least 284 women were killed by men only last year in Turkey.

Besides, mitigation of punishment in female abuse cases is another serious problem. The perpetrators receive reduced sentences for reasons like “unjust provocation” or “good conduct abatement.”

Seker, who is also the attorney pursuing the case, says he will have to convince a judge not to give a light sentence due to the brother’s charge that he was provoked.

“I am rarely satisfied with criminal sentences in the violence against women trials,” Seker says. “Punishments shouldn’t be mitigated due to excuses.”

Burcu Karakas is a journalist in Turkey.

Christina Asquith is director of Across Women’s Lives and founder of The Fuller Project for International Reporting.