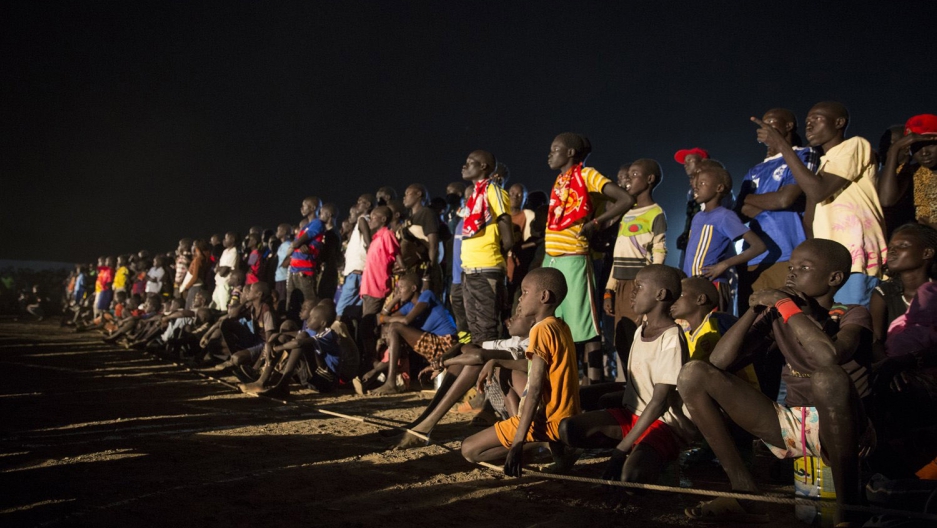 Refugees at Kakuma camp in Kenya watch the Refugee Olympic Team compete in Rio at a screening supported by FilmAid.

The Olympic Games are being broadcast and streamed far beyond Rio de Janeiro. One place where the crowds watching the competition are really dedicated? One of the world's largest refugee camps, a place called Kakuma in northwest Kenya.

Some 200,000 refugees live there in a crowded and sprawling tent city overseen by the United Nations refugee agency, UNHCR.

“We have two screens set up in two different locations in the camp ... and they've been broadcasting since the opening ceremony,” says Henry Tho, who lives in Kakuma. He works for FilmAid, a nonprofit that's teamed up with the Olympic Broadcasting Services to bring the Rio Games to refugees.

"As the world unites and comes together for the Olympic Games, we felt a responsibility to commit to the communities that the Refugee Olympic Team represents," said Yiannis Exarchos, CEO of OBS. "We hope that this initiative will offer the refugees from Kakuma a 16-day window of escape, hope and inspirational stories from the Olympic Games."

It was no small technical feat to route the satellite feed from Brazil and to get equipment on location. Heavy rains hampered work by volunteers. The official nightly curfew had to be lifted.

It's the first time the Olympic broadcast has been tried in a refugee camp, so no one knew whether the residents would be interested.

“We've had thousands and thousands of people attending,” says Naomi O'Callaghan, part of the FilmAid team at the camp.

“Families, men, women, children. It’s very popular," O'Callaghan says. "The kids come first. They set up extra early so they can get their place right up front. They bring their mats and their chairs, anything they can sit on, and they sit there and they wait and the sun goes down and then that's when the crowds of people come. So the kids are so enthusiastic they come extra early.”

Mary from #Kakuma says "I want to cheer the #RefugeeOlympicTeam and get to see them bring medals home."#TeamRefugees pic.twitter.com/pEL9b9JpDp

As many as 2,000 people huddle around the big TV screens well into the night. Track and field events seem to be the most popular, says Tho.

“I think simply it’s because we have runners or athletes from Kakuma — five of them," says Tho. "So the community members are very eager to see how they're faring, performing in all the races and they are quite excited.”

He's referring to the first-ever Refugee Olympic Team competing under a shared flag this year in Rio.

The team includes two Syrian swimmers, two judokas from the Democratic Republic of Congo, an Ethiopian marathoner, and five runners from South Sudan.

At least five of the athletes on the refugee team have lived in Kakuma, so they're favorites — even though Jamaican sprinter Usain Bolt gets the biggest cheers.

23 year old Dut Thiong from #Kakuma says: "I never knew that some games existed. The #Olympics has opened my eyes" pic.twitter.com/fjBU3J6aqd

Tho says one young refugee watching the Olympic broadcasts asked him: “What's next after the Olympics? Are the Games in Rio going to impact our lives in any way?”

Tho doesn't have a handy answer to the question. But he says the Olympic television experiment has been worth it.

“It’s quite exciting to bring all of this to the community, to project a bit of hope and give them joy at this particular time," he says. "I remember when one of the racers, one of the athletes from Kakuma didn't perform very well. You could see it in their faces. But this is the first time ever we've had participation from Kakuma and the most important thing is that the world will come to know about the situation facing immigrants and refugees around the world.”