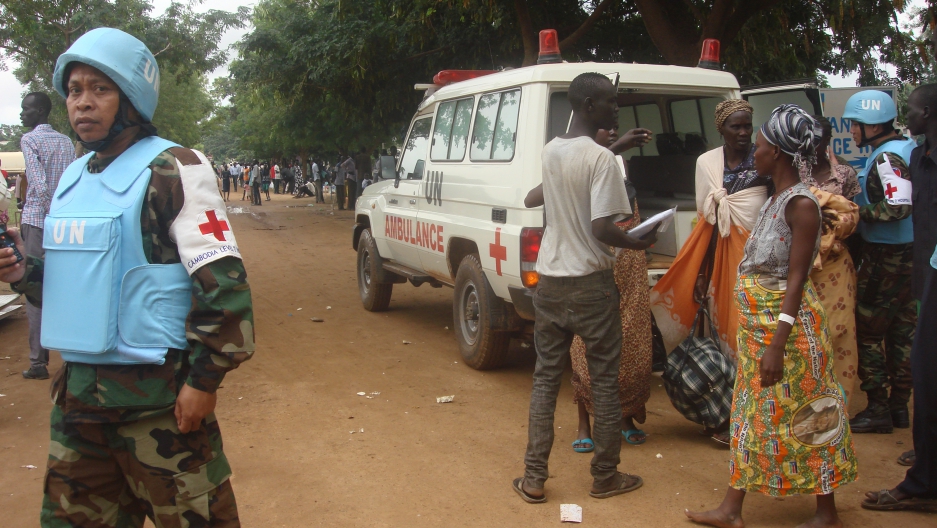 A UN peacekeeper from Cambodia stands inside a camp for internally displaced people in the United Nations Mission in South Sudancompound in Tomping, Juba, South Sudan, July 12, 2016.

At 3 p.m. on July 11, South Sudanese government soldiers attacked Americans and other international workers at their humanitarian compound just outside of Juba.

I was one of the victims.

During the previous three days South Sudanese government soldiers had fought opposition fighters nearby. Having dispersed their opponents, the soldiers — not paid for months — turned to looting, murder and rape.

“You Americans are responsible for what is happening in our country,” one angry soldier said before striking an American with the butt of his AK-47.

One government soldier fired at the lock of the door to one room. Twelve men and women were behind the door, including me.

A soldier yelled, “Open the door or we kill everyone in the hall.” I tried to open the door but could not.

As I explained the door had been damaged and could not be opened from inside, the soldier fired through the wooden door, hitting me in the leg.

Phone calls, texts, Skype messages and radio calls for help were made to the UN base a kilometer away, as well as the US Embassy, private security companies and other embassies.

Twenty minutes later, the soldiers broke through the door. They pointed their guns at the women in the shower and shouted, “Do you want to die?”

Soldiers stole phones, wallets, passports, money, clothes, computers, televisions, beds, cameras, mattresses and vehicles — everything they could haul off. The next day they brought in a crane to steal the generators. The officers brought their wives to shop through the clothes of the international women.

We were all marched downstairs, where we saw the body of a prominent South Sudanese journalist in the courtyard. They had executed him because he was an ethnic Nuer.

They then took us back upstairs into different rooms and began to take out the women one by one.

I said, “Look these women came to help your country. Don’t hurt them.”

The women were forced out of the room and I heard threats, shouting and crying from next door.

Much later government officers arrived and said they were there to rescue us and take us to a hotel. They took us outside in different groups and transported us to an office known for interrogations and torture. I was separated because of my wound and taken to the local hospital.

It was several hours later before we learned that two of the international women, two of our colleagues, were kept overnight and abused and raped again and again. No help arrived during their long night.

The crisis in the young nation of South Sudan has become more desperate daily. The government, the UN, the US and its allies are failing the people of South Sudan who experience atrocities daily.

I honor the courage, professionalism and humanitarian commitment of my brave colleagues and have deep empathy for the people of South Sudan. We must hold the government and opposition accountable. We must focus on tough, realistic diplomacy, prosecute government soldiers committing war crimes and improve the protection of workers and volunteers who are helping the people of South Sudan.

Jesse Bunch is a private contractor. He is currently recuperating in Vermont.

RELATED: How does South Sudan's government avoid sanctions? It has spent millions on Washington lobbyists.