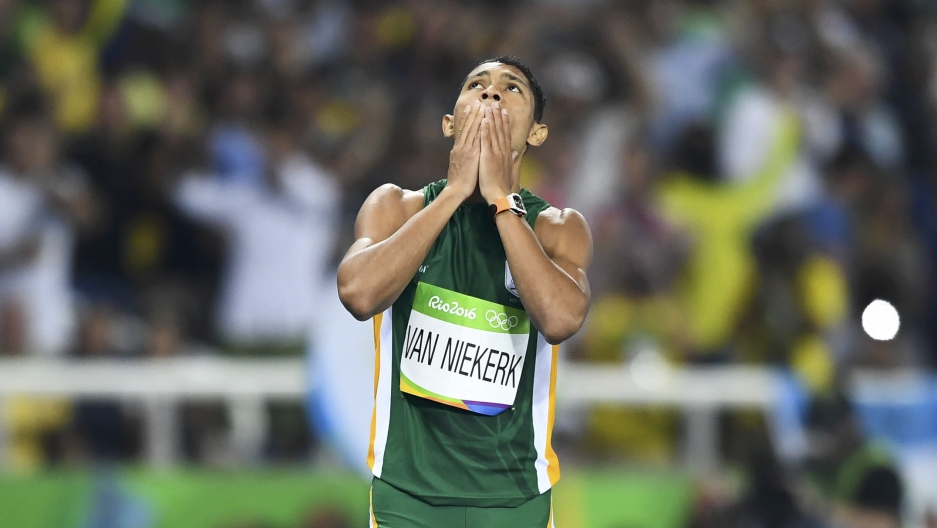 In the early hours of Monday morning, South African time, history was about to unfold.

People across the country had set their alarm clocks for just shy of 3 a.m. — just in time to catch the Olympic 400-meter race live on television.

Sleepy but hopeful, our eyes were trained on the country’s Wayde van Niekerk, who had won gold at the 2015 World Championships in Beijing. But with the fierce competition, would he stand a chance? Coming from lane eight, Wayde whipped around the Rio de Janeiro track. As he neared the end, he soared even farther ahead to cross the finish line in a time that left us all stunned.

Van Niekerk had won the Olympic gold medal with a time of 43:03 seconds, shattering Michael Johnson’s world record, which had stood for 17 years. It propelled South Africa into a frenzy of celebration. We had expected him to clinch a medal, but to break the record in the way he did was remarkable. Van Niekerk had just become South Africa’s first Olympic sprint champion.

High school students in Wayde's home suburb of Kraaifontein in Cape Town.They were celebrating his win after a special victory assembly at Scottsville High School in Kraaifontein.

As less committed fans woke up to the news, some planned their own small celebrations. The principal of Van Niekerk’s old school, Simonsberg Primary, surprised hundreds of pupils with a replay of the race beamed onto the wall of the school hall. At his mother’s alma mater, a victory assembly was held.

Ground down by a depressing economy, South Africans have been hungry for inspiration and in need of a hero. Van Niekerk had proved to be just that: a humble, driven and deeply religious 24-year-old runner from the working-class suburb of Kraaifontein in Cape Town.

In Kraaifrontein, where I spent most of the day, people stopped in the streets to greet each other and celebrate.

“Wayde is an inspiration. It just shows that no matter where you come from, you can aim high. You can do anything with hard work and dedication It’s pushed me to go for my goals,” said Roger Jantjies, a 15-year-old high schooler beaming with his friends in their school uniforms, in this suburb peppered with factories and small suburban homes.

Social media erupted in a flurry of tweets and postings. Cape Town’s mayor, Patricia de Lille, thanked Van Niekerk "for making history and for making South Africa proud." National newspapers were splashed with headlines and photographs of his triumph.

Radio stations lit up with interviews, including one with the Olympian's mother, Odessa Swarts, a former sprint champion herself. As a schoolgirl, she set provincial records in the 100-meter and 200-meter races, but took a principled stand and did not compete internationally under apartheid. It took a generation of waiting for her son to compete in a democratic era.

For Swarts and her husband, and another eight family members, Van Niekerk’s win was their reward. The athlete had treated them all to a trip to the Olympics to watch him compete — a gift for his tightly knit family.

After the race, Van Niekerk paid credit to his 74-year-old coach, Anna Botha, a great-grandmother who has coached athletics in South Africa for over five decades. She became Van Niekerk’s coach three years ago when he left Cape Town to study marketing at South Africa’s University of the Free State.

For the young South African, who has always revered sprint sensation Usain Bolt, his Olympic win has edged him closer to breaking more records. After training in Jamaica in the lead-up to the Olympics, some of the Bolt magic may have rubbed off on him. And he has earned respect from Bolt himself, who embraced him in the stands after his win.

Van Niekerk should be prepared for an amazing welcome when he gets home. The ticker tape will be out.

“The whole country helped me believe in myself,” he said in a thank-you to his supporters back home. “My gold medal is for everyone.”

Kim Cloete is a journalist from Cape Town, South Africa.