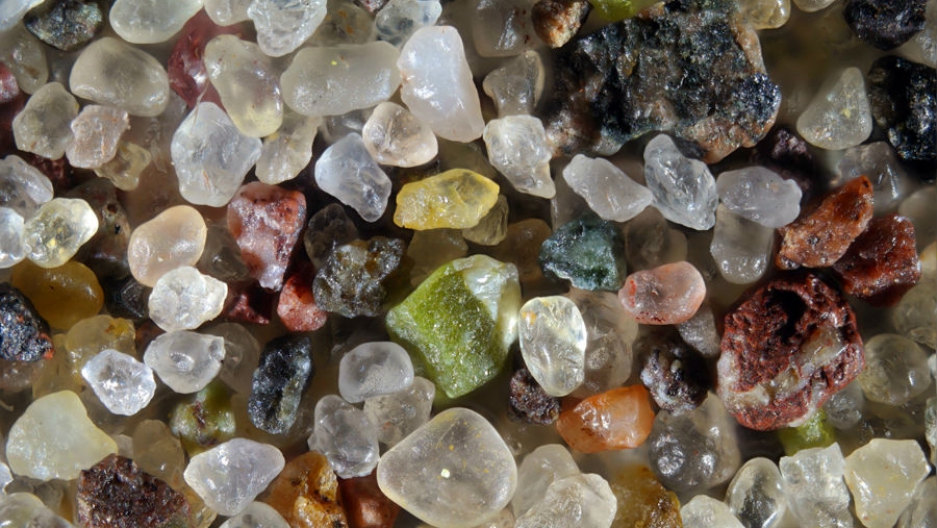 Sand found in Calumet, in Michigan’s Upper Peninsula. The pistachio-green grain in the center is epidote, and its blue-green neighbor is diopside. The rounded grain right-of-center is colored pink with copper. The clear grains are quartz; some are incredibly rounded. Magnified 125 times.

Retired biologist Gary Greenberg doesn’t receive regular letters or postcards in the mail from his fans or friends.

“I have thousands of bottles of sand that people have sent me,” Greenberg says.

This peculiar fan mail is related to Greenberg’s current passion: photographing grains of sand under 3D microscopes. When he first moved to Maui 11 years ago, “I came here really with myself and with my microscope, and I noticed there was a lot of sand around, so I started taking pictures,” he says. “Every time I look at sand, it’s still a surprise and incredibly beautiful.”

Greenberg’s photographs — published in two books and on his website — reveal the vast variety of sand grains that can be found all over the world, magnified dozens or even hundreds of times. Browsing through his work, you can see fine details in sea urchin spines ranging from purple to green; the smooth textures of spheroidal ooids; hollow shells left behind by protozoa; common quartz crystals found on continental beaches; and plenty of other colorful and bizarre-looking granules.

“It’s amazing how completely different any beach [sand] is,” Greenberg says. “I see sand as nature’s tiny sculptures and how environments can sculpt these little works of art in different ways.” 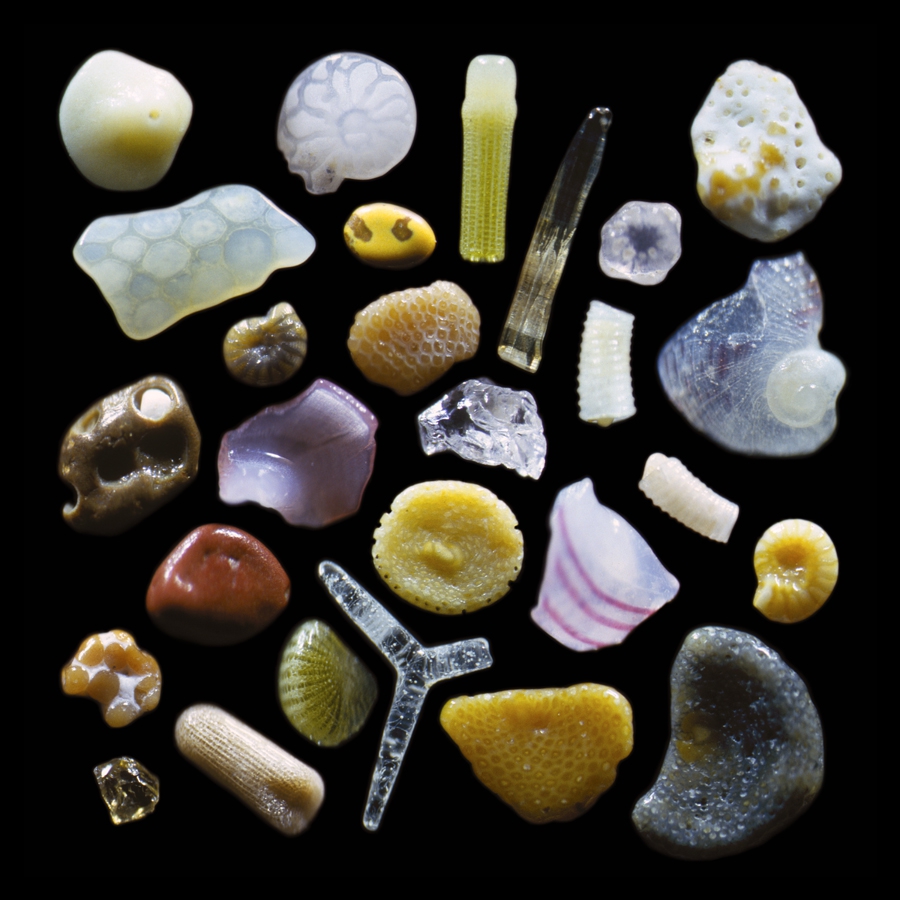 This intriguing array of sand grains reflects the diversity of marine life in the ocean around Maui as well as the volcanic origin of the island. At the center is a tiny piece of glass. Above is a caramel colored fragment of a bryozoan, an aquatic animal that lives on coral reefs; two other bryozoan fragments are in the lower right. The three-pronged glassy spicule was once part of the internal skeletal support of a sponge. The chartreuse and tan rods are spines from different varieties of sea urchins. The rectangular fragment second from the top on the left-hand side is from a sea-urchin shell. Numerous forams— relatives of single-celled amoebae—are also pictured here: the chambered spiral on the top row, the yellowish disc near the center, and the shell-like brown and yellow spirals. The red and brown particles are polished fragments of volcanic rock. Magnified 125 times.

According to Greenberg, there are two major categories of sand, based on its origin: mineral or biological. “The majority of continental sand is quartz crystal,” he says. Quartz crystal is the hardest of the minerals found in granite rock — which makes up most of the continental mass on the planet—and so it endures over time as softer minerals erode. (Islands, by the way, are generally made of basalt rock, which comes from lava.)

But of all the samples he’s explored, the sand that Greenberg considers most fascinating is otherworldly: It came from the moon, courtesy of NASA.

“The moon sand was the most amazing sand that I’ve looked at,” Greenberg says. Lunar sand is made of minerals also found on Earth, but because there’s no atmosphere, liquid water, or wind, “there’s no traditional or conventional way in which [moon] sand erodes,” he says, so it looks “very, very different” than anything found on our planet. 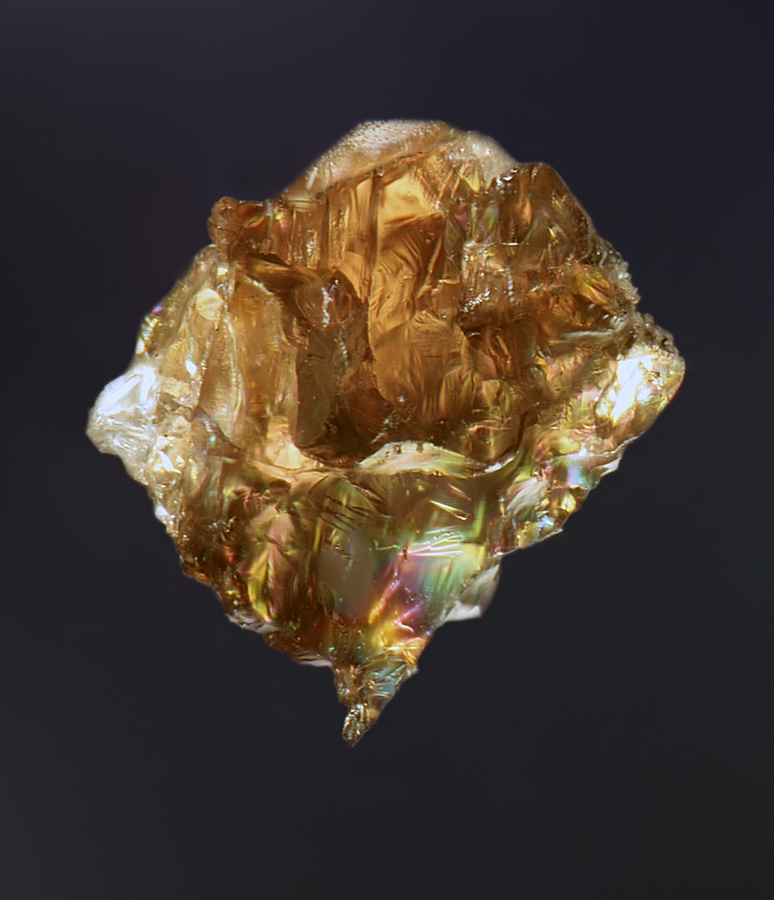 Moon sand collected from the Sea of Tranquility. Magnified 520 times.

In studying the lunar granule, he noticed dark, track-like markings, but their origin remains a mystery. “The first time I saw [them], I said, that looks like bacterial tracks — bacteria can eat their way through grains of sand,” Greenberg explains. “But, of course, there’s no bacteria on the moon, so it’s unlikely that’s what it is.” He believes that the tracks might have come from high-energy particles from the sun striking through the crystal.

Greenberg analyzes sand grains using 3D microscopes he’s developed himself since the 1990s. Using computer algorithms and more complex lighting, these microscopes can produce images that have better resolution and depth of field than earlier models, he says. He brought one of the first 3D microscopes to the commercial market, and continues to build 3D imaging platforms.

For now, he plans to keep his lens focused primarily on sand. He’s only gone through about half of the vials sent by fans, he says, and they keep on coming.