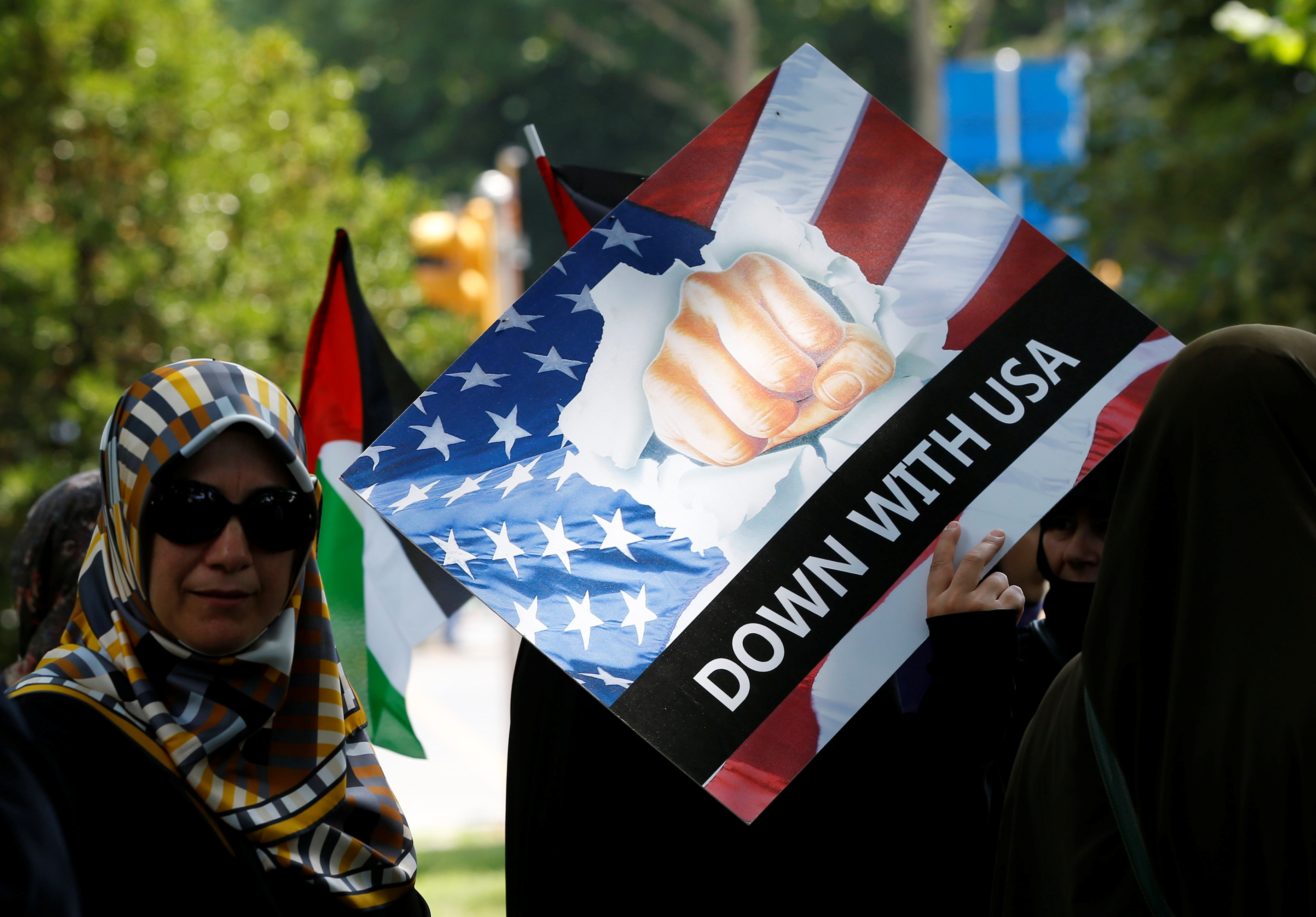 A demonstrator holds an anti-American placard during a demonstration to mark the annual al-Quds Day, or Jerusalem Day, during the Muslim holy month of Ramadan in Istanbul, Turkey, July 1, 2016.

The charge list against the United States within Turkey over last month's failed coup is long and, for some, damning.

The government says the United States is hosting the mastermind of the plot to topple President Recep Tayyip Erdogan, while voices in the media and wider society suggest Washington wanted the putsch to succeed and even end with the Turkish strongman dead.

With people of all political stripes seeing an American hand in the July 15 putsch, anti-American sentiment has reached levels rarely seen before.

The authorities have whipped up popular anger over the hosting by the United States of Turkish preacher Fethullah Gulen, whom Ankara blames for the coup, and its failure so far to extradite him to face trial back home.

And Turkish Justice Minister Bekir Bozdag has warned it is up to Washington to extradite Gulen to prevent "anti-US feeling" turning into "hate".

Yet analysts warn that exploiting such anti-American sentiment is a risky ploy for the government, given that Washington remains Turkey's key Western ally and a pillar of its foreign policy strategy.

With anti-US conspiracy theories becoming ever more elaborate, the US embassy in Ankara explicitly rebutted any suggestion that Washington had a hand in the coup and wanted it to succeed.

Earlier this month, Ambassador John Bass told Turkish journalists he was "deeply disturbed and offended by the accusations, without a shred of fact, that the US government was involved in this illegal coup attempt."

Four days after the attempted coup, the influential editor-in-chief of the pro-government Yeni Safak daily Ibrahim Karagul wrote wrote a column saying the United States had planned the coup and wanted to kill Erdogan.

"The US administration planned a coup in Turkey through the Gulen terror organisation and tried to cause a civil war," said Karagul who frequently travels with Erdogan on trips abroad, most recently to Russia.

Anti-Americanism at a popular and political level is nothing new. In 2003, the Turkish parliament hugely disappointed Washington by rejecting a request that foreign troops be allowed to use Turkish territory for the invasion of Iraq.

Yet claims that Washington is not being upfront about what it knew about the coup are not restricted to radical conservatives but held by wide swathes of society.

"The United States just thinks about its own interests. And it's Turkey who suffers," said Cihan, a young resident of Istanbul.

Sinan Ulgen, a former Turkish diplomat who heads the Edam think tank in Istanbul, said a "large majority of the Turkish population thinks that the United States are behind the attempted putsch", with the same idea perpetuated in the press.

Gulen's continued presence in the United States, where he has been living since 1999 in self-imposed exile inside a secluded compound in Pennsylvania, is the key cause of contention.

From Ankara's perspective, by allowing him to stay, Washington is effectively giving refuge to a "terrorist" who sought to usurp the democratically-elected authorities in Turkey by force.

Ankara says Gulen runs the Fethullah Terror Group (FETO) but the preacher has repeatedly insisted he played no role in the coup.

Bayram Balci, of Sciences Po in Paris, said Erdogan wanted to expose the United States as supporters of a "terrorist movement" — not just of Gulen's group but also of the outlawed Kurdistan Workers Party (PKK) which has waged a three-decade insurgency in Turkey's southeast.

In recent months, Turkey has been incensed by the level of cooperation between Washington and and the Kurdish People's Protection Units (YPG), a militia group which Ankara claims is the Syrian arm of the PKK.

"A certain anti-Americanism will develop in Turkey," explained Balci, saying Erdogan wanted it in order to consolidate his own public position.

"Anti-Americanism brings benefits in all countries. It works politically."

In his starkest warning yet, Erdogan said late Wednesday that Washington must either choose "the coup-plotting, terrorist FETO or the democratic country of Turkey."

Ulgen said such rhetoric was understandable in the context of the emotional shock Turkey had sustained, but Ankara needed to "begin to calm things down as this anti-Americanism will hurt Turkey itself."

"The most dangerous thing is if this anti-Americanism spreads its roots into Turkish society. This could put in danger Turkey's membership in the Trans-Atlantic community."

He said a second stage of the standoff could be much cooler, with the US examining the extradition request for Gulen in a long drawn-out process and this "burning anti-Americanism put on the backburner".