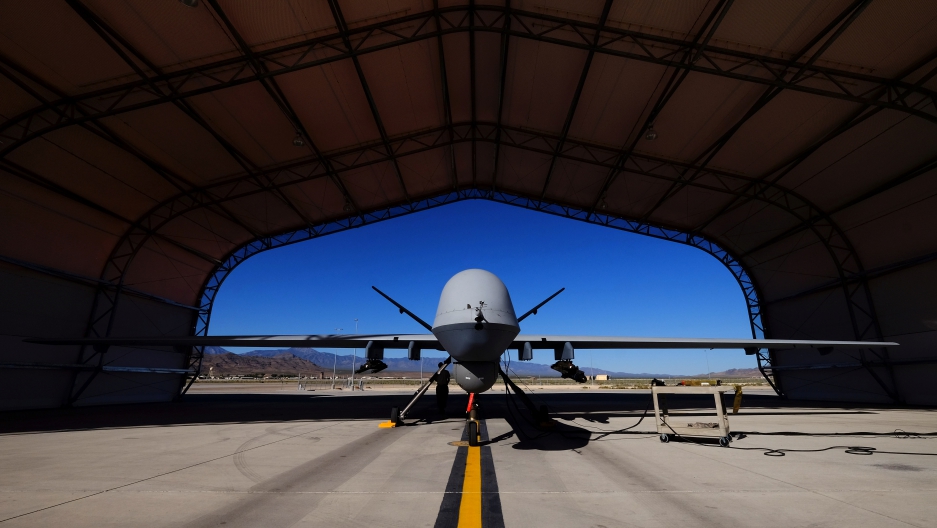 A US Air Force MQ-9 Reaper drone sits in a hanger at Creech Air Force Base May 19, 2016. The base in Nevada is the hub for the military’s unmanned aircraft operations in the United States.

Rosa Brooks’ new book opens with a striking anecdote from her time working in the Pentagon during the first Obama administration.

Brooks was counselor to Michele Fluornoy, then the under secretary of defense for policy. She recounts attending a briefing on an impending drone strike in 2010, witnessing the careful but bureaucratic machinations that go on as officials review intelligence on the terrorism suspect who is the target. As she sits there, the meeting doesn’t strike her as particularly unusual. If anything, it’s almost humdrum and routine.

She doesn’t think about it again until she’s eating dinner with her kids a few days later and the phone rings. It’s a colleague calling to let her know that the “window of opportunity” they were hoping for had opened up, meaning the drone strike had been carried out and the targeted individual was dead. They couldn’t say much more on the phone. Brooks went back to the dinner table.

“And then that night I had a terrible nightmare,” she recalls. “A terrible nightmare. It still scares to think of it, this awful nightmare of someone I loved, murdered, and body parts all over, and I kind of woke up shaking and it sort of hit me, whoa, you know on some level I should have known this already, but you go to work at the Pentagon and even if you’re not the one who pulls any triggers ever or gives any orders, you’re part of a vast bureaucratic enterprise that kills people, that reaches down out of the sky and kills people, thousands of miles away.”

Lest you think that means Brooks opposes drones strikes, it’s not that simple. Nothing is, in her analysis. In her latest book, "How Everything Became War and the Military Became Everything," she views changing national security dynamics through a nuanced lens that reflects the many parts of herself: child of peaceniks, human rights advocate, wife of an Army Green Beret, law scholar, Pentagon official, foreign policy thinker.

“'Targeted killing' is the phrase we sometimes use,” says Brooks. “It seems a little chilling, but I sometimes say to friends who are critical, well, would you prefer, 'untargeted killings'? Because that’s what the United States and the allies did during World War II for instance; we carpet-bombed entire cities. That’s not better, obviously, than a strike which is able to single out a single individual rather than indiscriminately killing thousands upon thousands of people.”

But, Brooks points out, it does start blurring the boundaries of what we think of as war. We used to shoot the enemy without knowing who they were; now we kill individuals specifically because of who they are, or who we think they are.

Amid increased scrutiny and criticism, President Barack Obama tightened the standards for drone strikes during his second term. Brooks isn’t satisfied yet, though she says it’s “absolutely true” that the Obama administration does everything it can to minimize and prevent civilian casualties.

“But what I think is still extremely troubling, and really inexcusable, is the level of secrecy and the lack of any meaningful non-executive branch oversight.”

“We still have a situation where in essence the US is saying we can kill any person anywhere on Earth, at any time, based on evidence that we will not share with anyone else. It will be a secret and we will never even acknowledge who we killed. I find that shocking.”

Part of the problem, Brooks argues, is resistance to acknowledging that major changes in warfare mean systems for waging war need to adapt.

“We like this world that we no longer live in, this fictitious tidy world where there’s war and there’s peace and there are combatants and there are civilians and it’s really easy to tell them apart and it’s a much simpler world and we’d all like to be in it. I think people are very reluctant to acknowledge that’s not the world we’re in and that might mean we have to do some painful and difficult, and yes, tedious work to create new kinds of checks and balances and accountability mechanisms if we care about preserving the rights that I think we need to care about.”

Brooks says she wishes more people had a foot in the military world and a foot in the civilian world as she does. It’s too simplistic in her mind to divide us all into hawks and doves. “Either you’re one of those civil human rights-y people or you’re a hardnosed military type, either you understand and respect our military or you don’t, and those oppositions are just nonsense, just as much as the fantasy that we can have war in a nice closed box tied up with a bow and it never has to infect daily life, that’s a fantasy too. Only when you let go of those fantasies and start recognizing these things are all interconnected can you start feeling your way to some more robust and lasting solutions.”