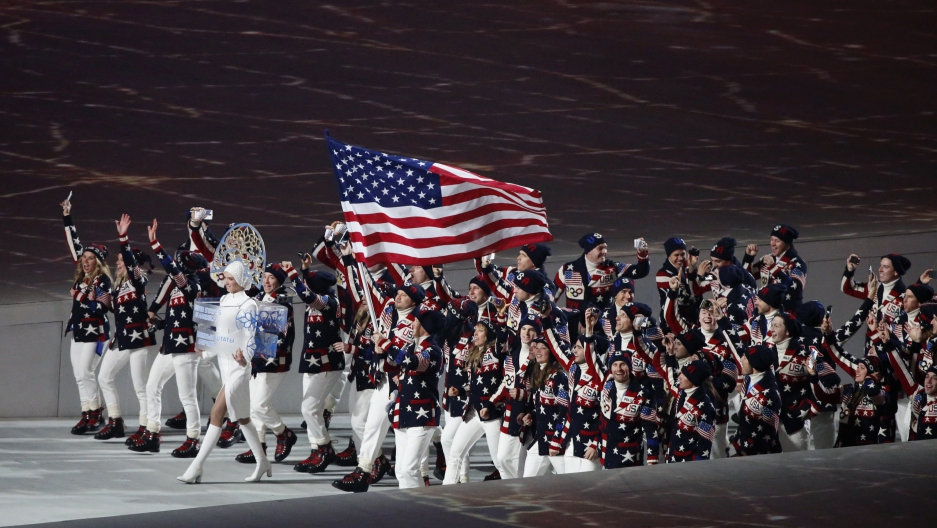 Flag-bearer Todd Lodwick of the U.S. leads his country's contingent during the athletes' parade at the opening ceremony of the Sochi 2014 Winter Olympic Games February 7, 2014.

It's an Olympic tradition: As teams from around the world parade in a grand opening ceremony, they briefly lower their flags in a show of respect as they pass the host nation's officials.

But at the Rio 2016 opening ceremony, you'll notice that Team USA won't lower their flag.

Indeed, the United States has a long tradition of ignoring this gesture.

Legend says it all started in 1908, when flag bearer Ralph Rose, an Irish American shot putter, refused to dip the US flag at the London Olympics.

"The suspicion is that because the Irish team then had to compete under the Union Jack, he refused to dip the flag to the Union Jack and to British officials, in protest," says Edgar B. Herwick III, who runs the Curiosity Desk at WGBH.

For a while after that, US flag protocol at the Olympics was a hodgepodge.

It became a solid tradition for the United States to not dip the flag in 1936. Then, both the Summer and Winter Olympics were in Germany. Hitler’s Germany.

In the 1940s it became law. The Unites States adopted a federal flag code that makes it illegal to dip the US flag to "any person or thing."

Typical American exceptionalism, you might say. But nope, not this time.

The United States isn't the only country that has refused to lower their flag.

"Once the Soviet Union entered the Olympic movement in the 1950s, they stopped dipping their flag," says Herwick.

That started a sort of "flag arms race," according to Herwick.

Now, most countries are back to making the gesture.

The United States is still holding out.