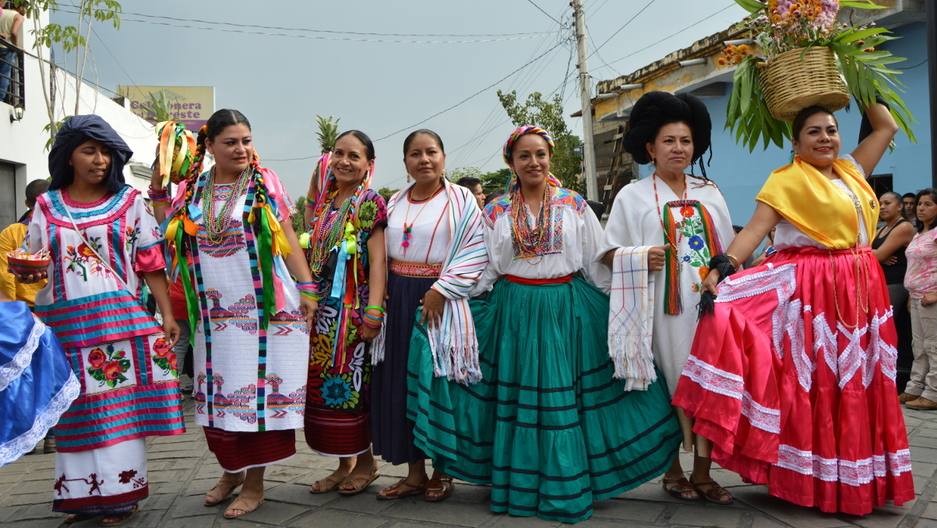 The southern Mexican state of Oaxaca just hosted one of the most important cultural festivals in Latin America: the Guelaguetza.

This state-sponsored festival, which draws visitors from around the globe, is a carefully stage-managed showcase of local cultural traditions. It's also a major boost to the local economy — ticket prices start at the equivalent of $50. That’s way out of reach for many people in Oaxaca. Some free tickets are available, but you have to stand in line for hours to get one.

But there’s another celebration that’s also become a Oaxaca tradition: the alternative festival known as the People’s Guelaguetza. It’s completely free, and organized mainly by a dissident teachers' union that’s been battling the government for years.

From a distance, the street processions with costumed dancers, brass bands and giant puppets look like many traditional parades here known as "calendas."

Then you see the banners with slogans like "no forgiveness, nor forgetting," and hear the chants calling for political prisoners to be released. 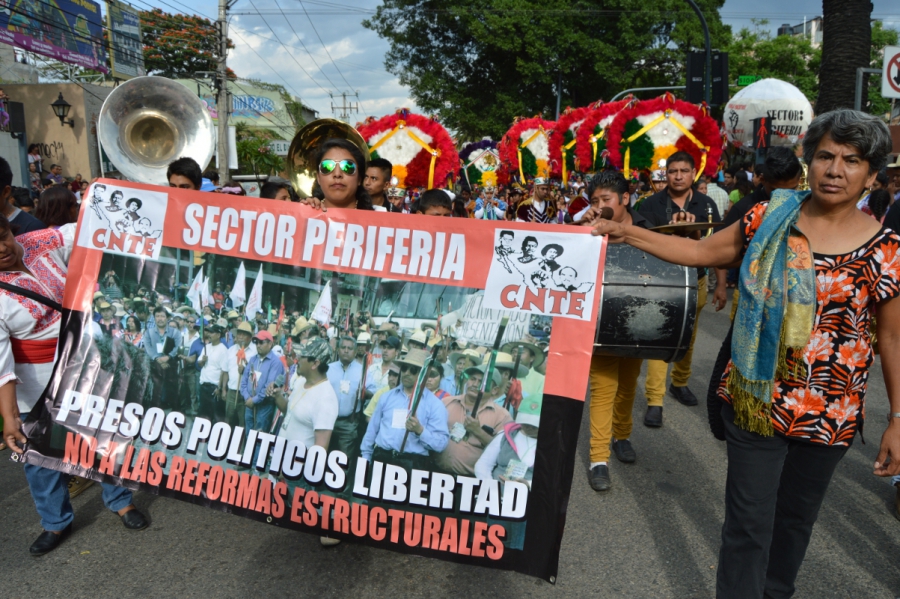 Teachers from the Oaxaca City outskirts march with a delegation of dancers and musicians with a banner calling for the release of political prisoners and an end to structural reforms that slash budgets for public services like education.

Participants see this alternative festival as more in touch with Oaxaca's actual indigenous cultures than the famous one is. The word "Guelaguetza" is Zapotec for a system of mutual aid and generosity that plays a crucial role in the social fabric of many indigenous communities.

“I think it’s necessary to rescue the real meaning behind the Guelaguetza. The Guelaguetza isn’t about the commercialization and selling of the indigenous person as a registered trademark,” said Salvador Aquino, a teacher and a member of the delegation of dancers and musicians representing the town of Miahuatlan de Porfirio Diaz in this year’s alternative parade.

“I’m sharing what I do, my dance moves, my music,” Aquino added. “That’s what the real Guelaguetza is all about: coming together as brothers and sharing.”

The teacher-organized processions are marathon street parties that snake through downtown neighborhoods and gather thousands of participants over the course of hours.

Some residents line the streets to cheer; others throw candy or confetti from their balconies. Many join the revelers, offering mezcal in tiny plastic cups to fellow parade-goers. A few stake out corners and hand out free food as the procession goes by. 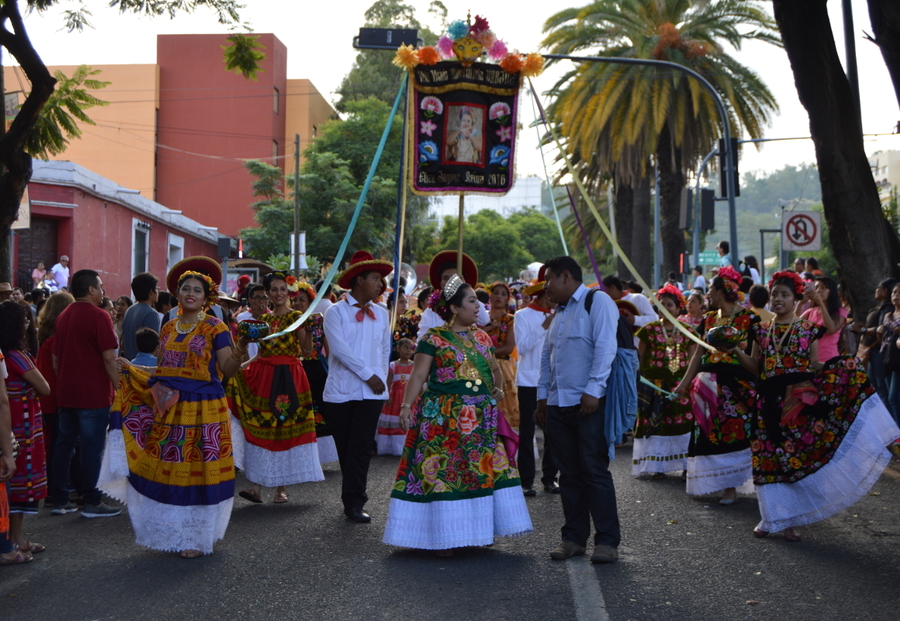 A delegation taking part in this year's People's Guelaguetza parades through the streets. Unlike in the state-sponsored Guelaguetza parades, members of the public are allowed to mingle with dancers and musicians during the processions.

Yaneri Castro and two helpers parked along the parade route recently to give away tacos filled with hard-boiled eggs and seasoned rice. They’re part of an environmental club for elementary school-aged children and their parents in the nearby city of Villa de Zaachila. Castro says they made enough food for 500 people, paid for by donations sent by Oaxacan migrants living in the US.

Sharing food is a way to support those who come to the festival. “So that they don’t give up the fight,” she said.

The "fight" is an ongoing struggle over a series of free-market "structural reforms" that are being implemented by Mexico’s federal government — in particular, a change that is supposed to make Mexican teachers more accountable. Educators in the largely indigenous states of Oaxaca, Chiapas, Guerrero and Michoacán have been protesting the measure for years now, and with particular intensity in recent months.

The demonstrations turned deadly in mid-June after state and federal police opened fire while attempting to clear a highway blockade near the town of Nochixtlán, in Oaxaca’s indigenous Mixteca region. The death toll depends on the source, but between 8 and 11 people were killed.

Teachers carry crosses with the names of nine people killed in a June 19, 2016 police operation to clear highway blockades between Nochixtlan and Oaxaca City. The banner reads, "For our fallen, we vow to win."

The deaths sparked a debate about whether to even hold an alternative festival this year.

“People worried that holding the festival would be like mocking the dead,” said one teacher from Nochixtlán, who spoke on condition of anonymity. “But in the end, we concluded that going ahead with the event was a way of paying homage to the dead instead.”

The killings in Nochixtlán have added a new set of demands to the conflict between the dissident teachers and the federal government. Negotiations continue, though a quick resolution seems unlikely. It’s unclear at this point if the dispute will affect the start of the new school year later this month.

But at least for the duration of the People’s Guelaguetza, the teachers shifted from protest to shoring up social connections and celebrating Oaxaca’s rich cultural heritage — without charging an entry fee.