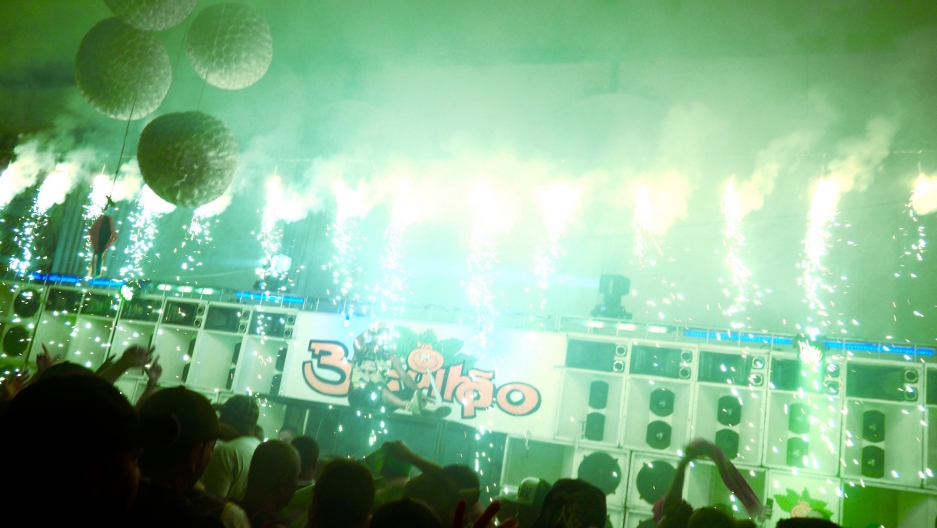 To get Brazilians excited about the Olympics, the city government in Rio de Janeiro commissioned a countdown song in the funk carioca style, which is very popular in the city.

“Funk is the culture of Rio de Janeiro,” says Gabriela Vieira, one of the song’s writers and singers. “It tells the story of the things we live through here.”

But, she adds, it also faces heavy oppression. Funk carioca began in the 1980s, when local artists, known as MCs, started singing over tracks of Miami bass music. They invented irreverent rhymes about daily life, and the scene developed at dance parties called "bailes" in Rio’s poor neighborhoods, favelas.

“Funk got young people from the favelas to circulate around the city, and especially to visit other favelas,” says MC Leonardo. “Residents became proud to say where they were from,” adds Leonardo, who is affiliated with Apafunk, an organization that supports funk in Rio. In the 90s the war on drugs brought violence to many communities, and police began to raid funk parties, claiming they were rooting out drug traffickers. Although traffickers attended and sponsored some bailes, “the specific targeting of bailes reveals a huge double standard in Brazil’s war on drugs,” says Guilherme Pimentel, a lawyer who volunteers with Apafunk.

“Police don’t raid parties in rich neighborhoods where there are plenty of drugs,” Pimentel says. “And in many favelas, police leave traffickers alone for most of the week, and choose to carry out raids when residents are experiencing leisure and self-esteem. If police were serious about reducing violence in Rio, they would take better control of their arms and munitions, which often end up sold to traffickers, instead of raiding funk parties.”

Rio’s pacification police program, launched in 2008, aimed to improve the relationship between police and communities, but officers earned criticism from the start for banning bailes and arresting MCs. In 2013 Rio’s state government abolished the state decree that police frequently used to shut down bailes, and state secretary of public security José Beltrame pronounced, “nothing is more Rio de Janeiro than funk.” But a new, similar decree passed in 2014 requiring heavy documentation, 40 days in advance, for small events in public spaces.

“The law is not applied evenly to all kinds of events,” says multi-genre cultural producer Marcello Santos. He organized a daytime funk event last month that police shut down even though he turned in required documents 45 days in advance. Pimentel has documented over 25 cases of funk shutdowns in the last five years, and a dozen in which police reportedly shot or destroyed thousand-dollar sets of sound equipment. In most cases, event organizers reportedly refused or forgot to pay a bribe. A police spokesman declined to comment on the shutdown of Santos’s event, but their communications office wrote in an email that “the police follow the 2014 decree.”

“There have to be some rules,” says 30-year sound system operator Antonio “Tojão” Aragoso. “But authorities add extra barriers for funk that are expensive and extremely difficult to follow.”

All 30 bailes MC Leonardo named in the now-classic "Endereço dos Bailes" no longer occur regularly, and many have gone extinct. “I don’t think we’re advancing when we have young people staying inside and just reading the news on their smartphones,” Leonardo adds. “They should get out in the city and be the news.”

“I think funk is repressed because it has so much potential to turn people into political actors,” says social worker Rosana Lopes, who was at Santos’s event when the police came. Funk allows self expression on any and every topic. Some funk songs tell stories of living through daily violence, of racism, segregation, and police repression — and also local pride, creativity, and solidarity. Cidinho e Doca's "Não Me Bate Doutor" criticizes police suppression of local culture. And there’s a funk about the Olympics that the government didn’t sponsor. It’s by MC Mano Teko, who sings about evictions and militarization of favelas.

Rapper Marcello Silva, whose production company directed the Olympics countdown video, says artists in Rio have reason to praise, not criticize, the city government. He says Rio invests twice as much as most other Brazilian cities in cultural projects, including in low-income parts of the city. “I think we need to move past the discussion about the favela versus the rest of the city and the persecution of bailes, and focus on creating new things,” says Silva.

Other artists, such as cultural producer Julio Barroso, were less pleased by the Olympic funk song. “I’m shocked,” Barroso says. “The city government is selling a false image, which is that it cares equally about all social classes. In addition to evicting the poor, it cut major bus lines connecting the poor outskirts with the wealthy South Zone, further segregating the city.” He adds, “Black Brazilian culture like funk is used at times when the government wants legitimacy, but if you calculate how much support it gets among government funding for culture, it’s extremely low.”

Teko says it’s so difficult to make a living in funk in Rio that many MCs are regularly traveling to São Paulo to perform. This means income loss in local Rio communities as well, as bailes employ a whole chain of people, including sound operators, food vendors, drivers, barbers, and more.

In São Paulo, a larger music industry can offer funk artists support such as production facilities to make high-quality music videos. “It is possible to develop those services and a more professionalized funk scene here in Rio,” says Teko, “if we work together.” Teko points to a group of funk organizers who used to compete with each other, but now work together to hold special bailes in community centers across the city. On a recent Sunday night in the north side neighborhood of Bras de Pina, hundreds danced at a baile featuring a 12-foot high wall of sound, sparklers shooting down from the ceiling, and the funk anthem of that particular area. 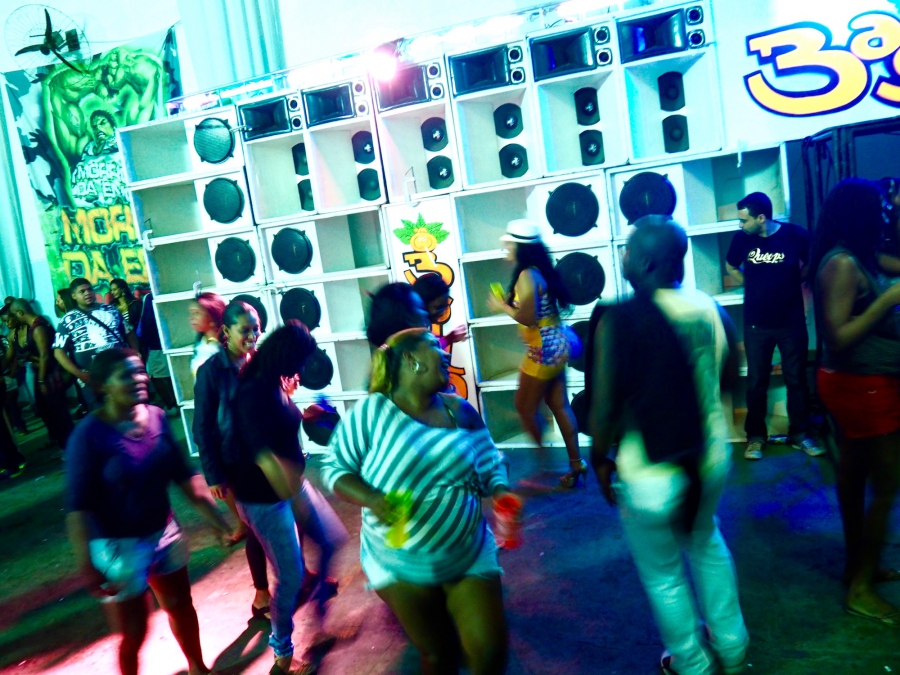 “Funk remains strong,” says MC Carol, who vaulted to fame rhyming about bossing around her boyfriend and rewriting the history of Brazil. “It talks about everything, and whatever a big hit talks about lands in the newspaper. You can’t ignore it.” A popular 2015 funk song about favela bailes has been rewritten as a protest song for high school student occupiers, those opposing poor public services in Rio and those against the impeachment of President Dilma Rousseff.

In addition to the Olympic countdown song, funk will appear in the opening ceremony sung by Rio’s Ludmilla. And during the games, contests of passinho, a dance done to funk music, are scheduled to take place throughout the city.

“I think funk is one of the few things that can unite Brazil in this moment,” says professional passinho dancer Rafael Mike, originally from Rio’s outskirts of Nova Iguaçu. With his group Dream Team do Passinho, Mike has traveled to Miami and New York to perform. But, like Carol, he points out that the bailes where he developed his talents no longer occur, “and it shouldn’t be that way. Bailes should be able to happen in communities.”

The fact that funk has reached the Olympics shows its importance, says Rosana Lopes, “but if funk were given the space it legally deserves, it would boost not only local economies, but also citizenship.”

For Mano Teko, “funk continues to be an act of resistance.”