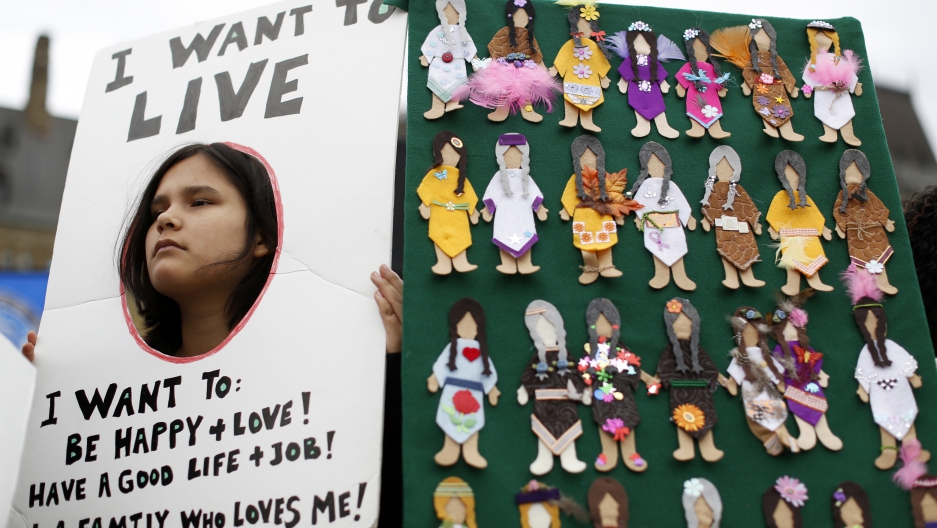 Carol-Ann Moses takes part in the Sisters In Spirit Vigil honouring the lives of missing and murdered aboriginal women on Parliament Hill in Ottawa October 4, 2013.

If a young girl went missing in your community, would you go out and look for her? Would you expect posters to be put up, and a search party to be formed?

That’s what should happen, but in Canada aboriginal woman and girls have been going missing for decades, never to be found. 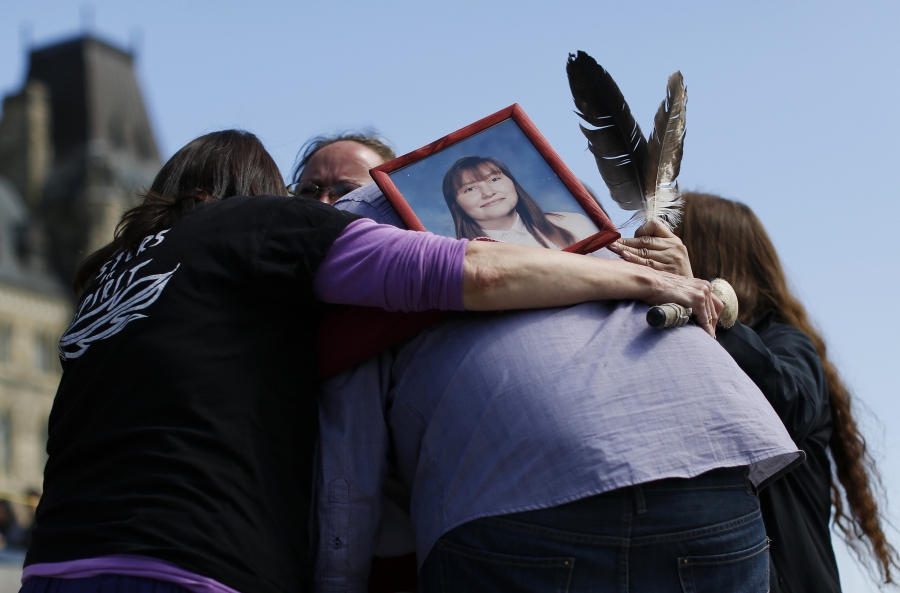 A photograph of Terrie Ann Dauphinais is seen as participants hug after singing a song during the "24 Hour Sacred Gathering of Drums" protest calling for an inquiry into missing and murdered aboriginal women, on Parliament Hill in Ottawa May 12, 2014. Dauphinais was found murdered in her Calgary home on April 29, 2002 and the case remains unsolved.

As a way to look into the violence facing aboriginal women in Canada, the government has named five commissioners to lead the National Inquiry into Missing and Murdered Indigenous Women and Girls.

The national inquiry is independent, and is not part of the federal government.

“I think what this inquiry is aiming to do is take a look at some of the root causes of this issue and try to propose some concrete solutions to address it,” said Connie Walker, a reporter with the CBC, during an interview with The World.

Walker said the RCMP numbers were a “shocking wake-up call for a lot of Canadians who may not have been familiar with the issue even though, it’s been on going in indigenous communities for so long.”

Walker said the problem only grabbed national media attention in the last couple of years.

“The national inquiry is an important step in our journey on reconciliation with indigenous peoples in Canada,” said Carolyn Bennett, Canadian Minister of Indigenous and Northern Affairs, during a press conference on Wednesday.

“For over a decade, the families of missing and murdered indigenous women and girls have been demanding action,” she said.

The newly appointed commission members will now be able to do the work needed "to put an end to this national tragedy,” she continued.

The commissioners include Marion Buller, Michele Audette, Oajaq Robinson, Marilyn Poitra and Brian Eyolfson, who will start working on Sept. 1, 2016.

They will study and report on the roots of the violence that indigenous women and girls experience. The commission will examine patterns and fundamental factors that could explain higher rates of violence.

Some of those factors could be linked to historical, social, economic, institutional or cultural issues, for which the commission will have to account.

“It’s focused on trying to stop this national tragedy, which sounds like a simple task but is really complicated,” Walker said.

The government has committed $53.86 million over two years to fund the inquiry.

“The government of Canada is committed to doing better. We will take action together to reach the goal to eliminate, as much as we can, violence against indigenous women and girls,” said Jody Wilson-Raybould, Cananda's justice minister and attorney general.

A full video of the naming of commissioners can be viewed here.