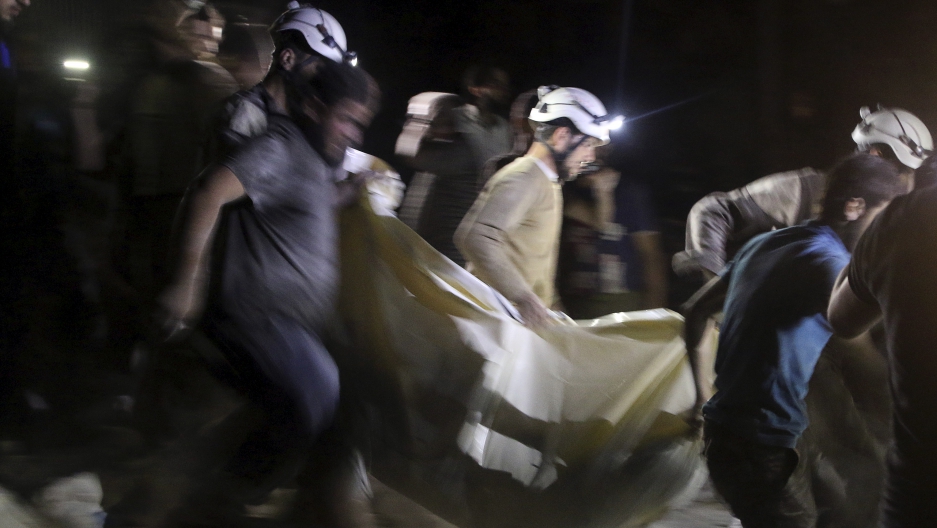 Civil defense members carry a casualty after an airstrike in the rebel held area of al-Sukari in Aleppo.

Aleppo is a long way from Chicago.

But Samer Attar made the trek from his home in Illinois to the besieged Syrian town this summer. For two weeks he toiled in an emergency room beside a dwindling number of doctors who are treating the Aleppo war-wounded.

His journey began by simply walking across the Turkish border.

"I was with a group of local Syrian doctors who know the routes," he says. "These are good people who I trust."

The doctors rode to Aleppo with drivers who work for one of three functioning hospitals that remain in the city. These days there's only one route. It's called Castello Road, and it's been targeted over the past three months by Syrian and Russian air strikes.

"You're sort of running the gauntlet because the area is being bombarded by helicopters and jets in the sky," Attar says. "You're always pressing your luck and it might be a one-way trip. As you're driving, you're seeing the remains of cars which have been hit by missiles and rockets and some of them were still burning. The air had the stench of rotten flesh."

Attar has made several trips to Aleppo in recent years. But he says this one was by far the most precarious. He describes the underground emergency room he worked in as a sort of bunker, with sandbags lining the windows and barrels protecting the perimeter.

"All it took was one missile or one bomb and you'd be working for hours. After a market was bombed, or a school or a residential area was bombed, the ER was overcrowded, it was chaotic, full of people injured, full of family members looking for the injured," he says. "There were horrifying scenes of dismembered bodies, obliterated limbs. You're literally seeing people bleeding to death in front of you. And there's very little you can do."

Attar says the ER was overwhelmed with patients after bombardments. Those often occured twice a day. He says the tools surgeons used to drill pins or screws into bone, or to perform amputations, were "no different than a power tool you'd buy at a hardware store."

Many of those who work in the hospital have had no formal medical training. But the majority, according to Attar, maintain a Zen-like calm in part thanks to a sense of humor. He says younger staffers often rush out of the facility to play soccer, when time permits, despite the constant backdrop of fighting. He describes how his co-workers reacted after a missile landed close to the facility, knocking Attar off his feet.

"My heart was pounding and racing a bit. But the people around me were unfazed. This is kind of what they deal with," he says. "One of the administrators in the hospital started serving everyone tea."

After the missile hit, another staffer, a young surgeon, had launched into a long vignette about his efforts to outwit a fox who tried to steal the chickens on his childhood farm.

"It was a bit surreal because he was just very calm, and very composed and trying to put everyone else at ease," Attar says. "For me it was just an honor to be among them because this is their life, this is what they do every day, they all live in these hospitals solely for the purpose of helping their community."