But is it possible to market malaise? In Japan at least, the answer is yes.

Gudetama is a cartoon egg yolk that feels existence is almost unbearable. It shivers with sadness. It clings to a strip of bacon as a security blanket. Rather than engage in society, it jams its face into an eggshell and mutters the words, “Cold world. What can we do about it? 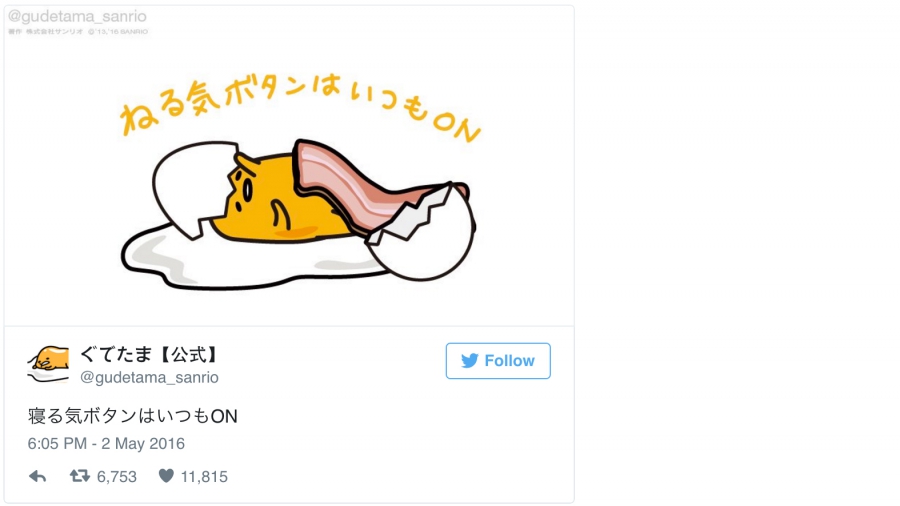 Gudetama may hate the world beyond its shell. But the world — within Japan’s borders, at least — sure loves Gudetama.

The misanthropic egg was introduced last year by Sanrio, a Tokyo-based corporation devoted to creating cutesy characters and licensing out their images. Its flagship character, Hello Kitty, is valued at $7 billion and appears on lunch boxes and pajama sets across the globe.

How did a sad little egg win so many Japanese hearts? Why did a billion-dollar corporation decide to market a character embodying depression? And what does Gudetama’s appeal reveal about Japan’s culture?

In search of answers, we turned to Matt Alt, a Japanese-speaking American and specialist in Japan’s pop culture.

As a co-founder of AltJapan — a Tokyo-based company that translates Japanese comics, TV shows and other media into English — decoding Japan for Western audiences is his job. His comments are lightly edited for length and clarity.

On mascots that evoke negative emotions:

In Japan, there’s a long history of personifying and anthropomorphizing inanimate objects. Gudetama is the most recent of a long, long lineage of mascot characters.

Many Japanese mascots will express emotions that Western mascots would not. In the West, mascots are used almost exclusively to cheer people up. In Japan, they’re often used to get a point across or act as mediators in situations where you wouldn’t want to express yourself directly.

Where can you find negative mascots in Japan?

One place you’ll see mascots that are uncomfortable or unhappy is in a Japanese pharmacy. They’re advertising medicine for conditions people don’t like to talk about. Like constipation or diarrhea. They’ll have a cute poop mascot because nobody wants to just walk in and say, “I’m all plugged up.”

Mascots serve as blameless mediators and tension breakers of conflict in Japan. So a mascot that isn’t happy? That’s very familiar to the Japanese.

Westerners may assume these mascots allow a repressed culture to vent. Is this true?

I would definitely push back against that.

It’s true that Japanese society values considering the needs and thoughts of others. Especially in public. But that doesn’t mean Japanese people are incapable of articulating themselves.

I would say using mascots such as Gudetama is a more nuanced way of expressing oneself than simply verbalizing an emotion or typing it out. This is exactly the reason Japan is the country that invented emoji — those little blips and icons used to spice up a conversation by injecting an emotional quotient.

On the deep roots of Japan's mascot culture:

Going way back, Japan is a polytheistic, animistic society. The native religion of Shinto doesn’t have one or two gods. Or even 10.

It’s said to have eight million gods, an uncountable number. They can inhabit all sorts of things. There are levels — with gods on high, world creators and destroyers — all the way down to the god of the toilet.

The concept that inanimate objects can be inhabited by souls infuses the entire mascot culture. That’s not to say Japanese people think there’s a little soul inside an egg. It’s just that there’s a cultural base there.

To put it into Judeo-Christian terms: In the West, if you read about some really horrible guy on trial for murder, you might turn to a friend and say, “That guy’s going to hell!”

Does that mean you think a dude in red tights with a pitchfork is going to boil that guy in a pot when he dies? Probably not. It’s more nuanced than that.

On Sanrio, the makers of Gudetama:

Sanrio doesn’t [create characters] by chance. They conduct surveys. They hire the best artists. They’re meticulous and extremely good at what they do.

Is it surprising that a corporation created a depressing icon?

It’s kind of like asking if you’re surprised the Navy Seals invented a new way to kill somebody. This is what these guys do. They’ve been honing their techniques for decades.

The reason Gudetama is so popular is, well, the cute design. But also because all of us feel like retreating into our shells from time to time. And he is literally retreating into his shell.

If the weirdest thing about a country is that they like anthropomorphic egg mascots, more power to them. In a world filled with all sorts of real problems — wars or shootings or secessions from unions — I think Japan can represent an oasis of innocence in a lot of people’s minds. (Editor's note: We spoke to Alt in June, before Japan suffered its deadliest mass killing since World War II. Still, Japan’s homicide rate makes the United States look like a war zone.)

When people say “Japan is weird,” they usually mean it in an affectionate way. I don’t think it’s necessarily negative or damaging.

What do Japanese people think of the weird label?

Japanese people revel in it too. Wouldn’t you rather be known as the country that has a bunch of anthropomorphic mascots that look like broken eggs than, say, the nation of shootings?

If you tell Japanese people on the street, “Hey, did you know you’re associated with cute mascots?” People will laugh. That’s what mascots are designed to do. Grab your attention and make you laugh. If people look at those characters and say, “Ooh, weird!” then the characters are doing their job.